As Adamu becomes the APC Chairman. 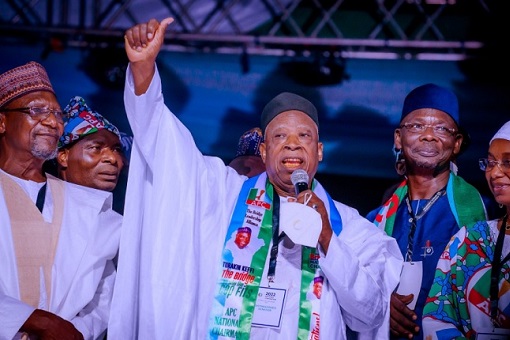 WHAT DOES AN ADAMU’S CHAIRMANSHIP PORTENDS FOR THE APC?

The emergence of Senator Adamu as National Chairman of APC is purportedly aimed at stopping certain presidential aspirants whom certain powerful figures in the party does not want to succeed President Buhari. The status quo will concentrate power on a group individual over and above other factions within the party.

Senator Adamu’s activities as APC Chairman is also expected to reduce the influence of certain figures like Asiwaju Bola Tinubu in the party. Tinubu was left out in the emergence of the Senator Adamu led National Working Committee. This is because of his presidential ambition.

The plot of the cabal is to do everything to stop Tinubu from becoming president in 2023. The plan is to put Tinubu’s ambition to rest. The cabal prefers a weak Southern candidate. Unfortunately, despite the plot, Ajiwaju Bola Ahmed Tinubu emerged the APC presidential flagbearer on the 8th of June at the APC convention in Abuja.

The emergence of Adamu was also designed to bury the 2023 presidential ambition of the current Vice-President, Professor Yemi Osinbajo and that of the Governor of the Central Bank of Nigeria, Mr. Godwin Emefiele.

The new APC Chairman and the other member of the National Working Committee are expected to reconciled the various warring factions and splinter groups in the party. Senator Adamu should use his office to save the party from possible disintegration ahead of the 2023 general elections. All the aggrieved factions should be brought to the negotiating roundtable for the purpose of resolving the internal crisis and acrimony within the party.

The outcome of the current intricacies and complexities in the APC will determine how the ruling party will fare in next year’s general elections.