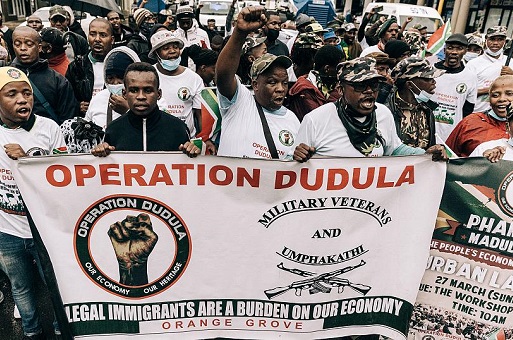 Anti-immigrant sentiment is again on the rise in South Africa. When was there no anti-immigrant sentiment in South Africa you will say? You might indeed be right. But this time, it seems black South Africans (Operation Dudula) are beyond serious on evicting for good other Africans from their country by forming vigilante and pressure groups solely designed to chase black Africans out of the so-called rainbow nation. And the Black Africans who are the targets of this resolve should not take the threat lightly. They should begin to make exit plans out of Mandela country, before they are taken out in body bags.

South Africa is a country that morphed from a culture of hate and violence.  Whites hate blacks, blacks hate Indians, coloured hate themselves, and they all hate African foreigners. You might be shocked at the level of hate that permeates the South African society. Don’t be! What will be shocking is if hate and violence is not at the core of how South Africans relate with each other and one another.

The history of oppression of black South Africans by the white settlers is well documented. And despite some face saving “Truth and Reconciliation” committee setup to pacify aching hearts, animosity and a need for revenge still lingers. This is witnessed in everyday interrelationships South Africans have with each other and others attracted to the white man’s wonders that is today’s South Africa.

It is this burning anger and vile hate that black South Africans then mete out to unsuspecting black Africans who want to call South Africa home. They (African foreigners) conveniently then become the escape valve that the average black South African who can’t seek revenge against their white overlords then settle for. Dispossess, maim, kill, and claim back our land becomes a clarion call that must be fulfilled at all course.

South Africans hate all black Africans that occupy their space and will want nothing more than to have them gone. They call them derogatory names such as “Kwerekwere.” This denigration in the name of Operation Dudula is not only condemnable but also dehumanizing.

HISTORY OF VIOLENCE AGAINST BLACK AFRICANS IN SOUTH AFRICA.

Before 1994, immigrants from elsewhere faced discrimination and even violence in South Africa. After majority rule in 1994, contrary to expectations, the incidence of xenophobia increased. Between 2000 and March 2008, at least 67 people died in what were identified as xenophobic attacks.

In May 2008, 62 people were killed in a wave of attacks across South Africa. Black foreigners, mostly migrants from Somalia were dragged through the streets of Alexandria. Tens of thousands of black foreigners were displaced and forced to seek refuge in places such as churches, mosques and police stations. It was the intervention of the military that eventually put a stop to the violence. That was days in which the killings continued unabated while the then president Thabo Mbeki dragged his feet in inviting the military to put a check to the violence. Critics later accused Mbeki of failing to heed the warning signs of looming violence and then hesitating to act when the killings began. The president waited 10 days to send troops into the townships. Lives could have been saved during this ten days. But what’s a kwerekwere‘s life worth in South Africa, right! Guess Thabo Mbeki was enjoying this macabre film on his tv titled “Hack the kwerekwere to death,” proudly brought to you by South Africa.

However, the killings did not start in 2008. It had been building up. As far back as 1994, black foreigners were thrown out of moving trains because black South Africans claimed they brought diseases and took their jobs. The same rhetoric presently fueling Operation Dudula. In 1998, three black foreigners were killed on a train between Johannesburg and Pretoria. About two years later, a Sudanese was thrown out from a train on a similar route. In 2007, a shop in the Eastern Cape was set on fire in a mob action. All these in later years later became everyday occurrence too numerous to mention except to highlight those with that added inhumanity, cruelty and animalism.

The violence that escalated in 2008 will remain unforgettable in the minds of many as it affected not only the black foreigners but also poor and disenfranchised black South Africans in the townships. In May 2008, a series of attacks accompanied by widespread looting and vandalism occurred in South Africa. These xenophobic attacks left 62 people dead, 1,7000 injured and 100,000 displaced. The attacks that began in Alexandria in Johannesburg soon spread like a wild harmattan fire to other parts of the country.

In April 2015, an upsurge of xenophobic attacks began in Durban and soon spread to Johannesburg and other parts of the country. Then Zulu King Goodwill Zwelithini was accused of fueling the violence with his comments, which were reported as: “Let us pop our head lice. We must remove ticks and place them outside in the sun. We ask foreign nationals to pack their belongings and be sent back.” This attack was also accompanied by looting of foreigner’s shops and characterized by violence in general.

In the 2015 xenophobic attacks, at least eight people were killed and hundreds displaced. In October 2015, there were sustained anti-migrant attacks in Grahamstown in the Eastern Cape. More than 500 people were displaced and more than 300 shops and homes looted and, in some cases, destroyed altogether. Muslims were specifically targeted in these attacks.

In June 2016, a wave of riots hit the City of Tshwane. While the riots were sparked by political discontent within the ANC, Somali, Pakistani and other foreign owned shops and businesses were targeted for looting. A number of black foreigners were also attacked. Attacks often resemble a blood sport, one in which black foreigners are gleefully hunted down and gruesomely murdered. The more gruesome the better … Burning (necklacing) became the only killing method that could make it to the front of the dailies. So, township thugs jostle to make front page. After all, even the police show disinterest when the corpses are kwerekweres.

In March 2019, riots targeting African immigrants broke out in Sydenham, Jadhu Place and Overport areas of Durban. About one hundred people attacked businesses owned by foreign nationals resulting in around 50 people seeking refuge in a local police station and mosque. Three people were killed in the riot.

Also, in September 2019, attacks and looting targeting shops owned by foreign nationals broke out in Jeppestown and Johannesburg following the death of a taxi driver. Around 50 businesses predominantly owned by Nigerian migrants were reportedly destroyed or damaged during the attacks.  The attacks coincided with a nationwide truck driver strike protesting against the employment of non-South African truckers.

Pockets of violence against foreign truck drivers and other foreigners were also recorded during the 2021 South African unrest. It must be noted however that blood letting is an everyday occurrence in the rainbow nation. Those against black foreigners have become commonplace and thus often go unreported.

WHAT IS OPERATION DUDULA?

Operation Dudula states that its action is aimed at addressing crime, caused by a lack of jobs and poor health services caused by an “influx of illegal immigrants”.  They have campaigned for small businesses to only employ South Africans, and for immigrant shop keepers to close down and leave South Africa. Operation Dudula has been accused of a number of instances of violence against African immigrants in South African townships, including forcibly closing shops and raiding properties.

Operation Dudula emerged under the auspices of black South Africans who are infuriated by the lack of proper boarder control and implementation of immigration laws in South Africa. On 16 June 2021, they led their first march through Soweto targeting people they suspected to be foreign drug traffickers and businesses that employed immigrants. The march increased in popularity and in the following months, several other anti-immigrant groups also going by Dudula or some variation of the name, such as the separate Alexandra Dudula Movement, were established. In April 2022, Operation Dudula expanded to Durban, KwaZulu Natal. Operation Dulula is led by Nhlanhla “Lux” Dlamini.

WHY BLACK AFRICANS NEED TO HAVE AN EXIT STRATEGY FROM SOUTH AFRICA.

The hatred against black Africans now permeate in the veins of all black South Africans irrespective of status or class. Before now, it was only the poor and disenfranchised black South Africans that were involved in the hate and xenophobic attacks against black foreigners. But right now, the anti-foreigner sentiments have infiltrated into all layers of the South African society. It now appears that even the political and traditional leaders also have the inclination to be xenophobic. Their utterances of late typifies that.

The violence against black foreigners will not stop. It is a mission those who share space with black foreigners have taken upon themselves to fulfill. It gives them an alternative to do something rather than dwell on their miserable lives. Operation Dudula attacks on foreign blacks and its attendant looting is a way of escape from the harsh realities of daily lives of some black South Africans.

At the end of the day, South Africa can never be home to other Africans. The natives make this abundantly clear. Stay … and face the prospect of ending up in a body bag. Having an exit strategy for a black foreigner in South Africa is the best way going forward. The timeless saying: “There is no place like home”, is very apt in the unfolding scenario.

In conclusion, foreigners residing in South Africa, especially those who fall within the negroid classification need to leave now or face the end of a machete. Or better still, wait to be necklaced like a goat set up for braai. The choice is yours! Choose wisely.