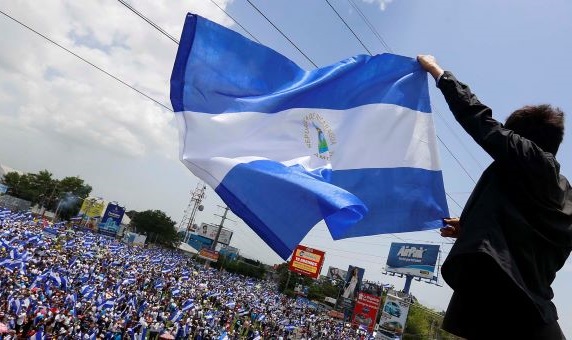 Nicaragua has always been at logger heads with the United State. The present government of Daniel Ortega has now decided to up the ante by welcoming Russia again to establish a military presence in the Central American country. This note worthy because it is the backyard of the United State of America. The significance of

Nicaragua has always been at logger heads with the United State. The present government of Daniel Ortega has now decided to up the ante by welcoming Russia again to establish a military presence in the Central American country. This note worthy because it is the backyard of the United State of America. The significance of this cannot be lost on students of global political economy. A NATO /Ukraine scenario is about to play out 2,881 kilometers to the USA. How the United State will react to this will be quite interesting to watch in the immediate and the long term.

A HISTORY OF THE US AND NICARAGUA DISPUTE.

There has been no love lost between the US and Nicaragua for generations. The first face-off between the US and Nicaragua occurred in 1909. This was under President William Taft, the 27th president of the United States. He ordered the overthrow of Nicaragua President, Jose Santos Zelaya. The coup started with the occupation of the port of Corinto, Leon and the railway line to Granada by a contingent of 2,300 US Marines. This culminated in the formation of a pro-US government. The United States occupation of Nicaragua began in 1912 to 1934. This was part of the Banana Wars, when the US occupied various Latin America from 1898 to 1934.

The resurgence of the conflict between the US and Nicaragua under President Daniel Ortega is capable of bringing back the cold war-like ideological rivalry between the US on the one hand, and Russia on the other hand. Will the world witness another battle of supremacy between democracy and communism? The Cold War that occurred between 1945 to 1990 divided the countries of the world along ideological lines. The US versus the USSR; NATO versus Warsaw Pact; Democracy versus Communism; Western bloc versus Eastern bloc; South Korea versus North Korea.

Is the world going to be bi-polar once again, just like in the Cold War era? The dispute between Russia and Ukraine could assume a new dimension. A proxy war could ensue, one in which Nicaragua will be used as proxy by Russia and the USA. The situation at the moment, is a game of tit-for tat.

WILL THIS BE ANOTHER CUBA MISSILE CRISIS IN THE MAKING?

The Cuba Missile Crisis also known as the October Crisis of 1962, was a major face-off that brought the US and USSR close to war over the presence of USSR nuclear-armed missiles in Cuba. It was a 13-day political and military stand-off. It was the moment when the two superpowers came closest to nuclear conflict.

It looks as if the days of proxy wars by the Superpowers is here again.

WHAT THE PRESENCE OF A “SMALL CONTINGENTS OF RUSSIA TROOPS” MEANS FOR THE REGION.

The presence of Russia military presence in Nicaragua may not necessarily degenerates into another “Cuba Missiles Crisis”. The reasons cited by the government of Daniel Ortega for allowing Russian troops, planes and ships in the country is for the purpose of training, law enforcement and emergency response in emergencies or natural disasters. However, the presence of Russia contingents is capable of destabilizing the relative peace in the region. A good example of this is the provision of military assistance to Venezuela to support the FARC guerillas in Colombia. The political outcome of this was devastating.

Russian military penetration will allow Moscow to convert Nicaragua or other similarly targeted states into intelligence-gathering centres. The US can no longer sleep with its eyes closed, because of its proximity to Nicaragua. Russia is up to some mischief with its presence in Latin America. It is definitely not there for altruistic or humanitarian purpose, no matter the reasons put forward.

HOW THE US CAN GO ABOUT CONFRONTING THIS PROBLEM.

Russia’s influence seems to be growing in Latin America. Both the rightist and leftist regimes in the region have failed to condemn the invasion of Ukraine. This is a reflection of Russia’s growing influence in the region.  Russia’s influence and diplomatic gains in Latin America constitute a challenge to democracy and the US’s regional interest. It is an affront on the values of freedom that liberal democracy stands for.

Leftists and anti-liberal leanings is gaining grounds in Latin America. Leftists candidates appears to dominate this year’s elections in the region. This will make it more difficult for the US to check Russia’s growing influence in the region. Polarization of the region is not the path the US should take. This will only worsen it’s diminishing influence in a  region where even the right elements are already shifting toward authoritarianism.

The US should engage the countries in the region with a policy of economic diplomacy. It should be ready to make concessions if it is necessary. It is expedient for the US to tread softly in its affairs in Latin America. This is because the growing resistance to the principles of liberalism such as democratic governance, open markets, individualism, liberty, equality, rule of law and civil society has reached an all-time high.

Sanctions should not be used against any country. They will simply just accept the warm embrace of Russia.  Sanctions as a tool of deterrence has failed in places like Iran, Cuba and Venezuela. Rather the US should use economic bait to counter Russia’s inroads into the region. Russia and China have increased their economic and military assistance to countries in Latin America in the last two decades. It is time for the US to do the same.

The US has repeatedly fail to help democracies in Latin America deliver the benefits of democracy to their people. Russia has encouraged autocratic and repressive regimes to gain wide access into the region. To correct this, the US should make promotion of democratic values and the strengthening of democratic institutions the core of its foreign policy in Latin America.

The US should as a matter of expediency reach to belligerent states in the region. It is only through warm and cordial relations with such states that the US can eclipse Russia as the most influential super power in Latin America. This will require astute diplomacy and statecraft. But it is achievable.

In conclusion, how the United State react and deal with the presence of possible future Russia nuclear weapons in its backyard will dictate if the situation portends possible nuclear winter for the region and the world as a whole. Having gone through the period of the Cold War, the US should delve into its depository of experience in managing such affairs to prevent it from escalating. Only time will tell, if this will be the case.