As the line blurs between ObIdient and IPOB 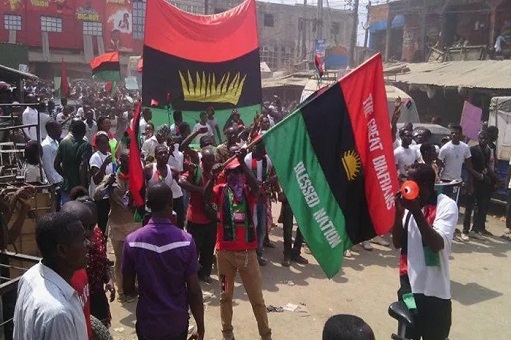 The recent clamour for the emergence of Peter Obi as Nigeria’s president come 2023 is taking on a dimension that begs in-depth evaluation of the tone, action, gesture, body language, purpose and interest of those who have taken up the mantle to canvass for the possibility of a Peter Obi 2023 presidency. And this group

The recent clamour for the emergence of Peter Obi as Nigeria’s president come 2023 is taking on a dimension that begs in-depth evaluation of the tone, action, gesture, body language, purpose and interest of those who have taken up the mantle to canvass for the possibility of a Peter Obi 2023 presidency. And this group of people who have aptly labeled themselves as “ObIdient” brook no dissent, option, or opposition. The use of threats of violence against anyone who has opposing views has morphed from social media to real space. One then needs to evaluate this group that label themselves the ObIdient and deduce if the group is not a mix bunch of legitimate folks rightly agitating for their candidate come 2023 and others who represent IPOB interest or are IPOB sympathizers.

THE PRESENT CHARGED POLITICAL SPACE IN NIGERIA IS PRECARIOUS.

There is no denying the fact that we are indeed living in perilous times in Nigeria. Apart from the Nigerian Civil War (1967-1970), this is the worst moment in the country’s political history. The country is plagued on all sides by problems that are becoming more intractable by the day. And it appears the government of the day either lacks the idea or running out of ideas on how to nip in the bud these problems.

Since the inception of the fourth republic in 1999, the Igbos have been excluded either by chance or design from been presidential candidates of the major political parties in the country. Therefore, they have been automatically shut out from the country’s presidency. In twenty three years after the country returned to civilian democratic rule, (after a prolonged period of military rule) it is only the South-West, the North and the South-South that have produced the country’s president. And this has fueled the cry of marginalization and clamour for secession by the Igbos.

In recent times, the social media space has become a veritable platform for the supporters of Peter Obi to galvanize support for their candidate’s 2023 presidential ambition. While other top contenders for the presidency together with their supporters are also active on the social media, this nascent tool of political mobilization and campaign has worked to the utmost advantage of Peter Obi. The ObIdient movement — the appellation of Peter Obi’s supporters —comprising of mainly young Nigerians are predominantly active on the social media space like Twitter, Instagram, Pinterest, WhatsApp, Telegram, YouTube and Tik Tok.

However, there is a sad twist to the use of social media by the ObIdient movement. They have gone beyond the use of the social media to canvass support for Peter Obi. Rather, they are employing social media to denigrate and intimidate the opposition and the supporters of the opposition or any other person(s) who share a different view. The alleged threat by the supporters of Peter Obi to burn down the New Afrika Shrine in Ikeja Lagos over reports that the multiple Grammy nominee and son of the Afrobeat legend, Femi Kuti called supporters of the Labour Party presidential candidate ‘zombies’.

The unsavory use of the social media by the ObIdient movement to seek to coerce and threaten others to join the movement is not only detestable but also capable of heating up the polity. There is no need to create further political tension in a country where division and animosity is already rife.

It must be noted that Nnamdi Kanu has severally hurled hate speeches against the Yorubas. He had made call for all Yorubas to be killed. Members of IPOB have repeatedly referred to Yorubas as “yoropigs” “yaribads” yorobastards” and other derogatory labels. The IPOB leader went to the extent of dissuading Igbos from attending any church where the pastor is a Yoruba man when he said: “No Igbo man should attend any Church where the pastor is a Yoruba man, they are criminals and fools”; “Any Igbo Person who attends any church pastored by a Yoruba man is an Imbecile”; “Pastor Kumuyi should be stoned and dealt with thoroughly if he comes to Aba for his planned crusade”.

IS THE OBIDIENT MOVEMENT NOW IPOB ?

It is becoming increasingly difficult to divorce the ObIdient movement from the proscribed IPOB. The recently adopted modus operandi of the ObIdient movement (denigration and intimidation of the opponents of Peter Obi and their supporters) really leaves much to be desired. The threats by the movement to burn down the New Afrika Shrine gives it the feel of a “terrorist group”.

Elections are neither won on the social media space or through threat or the use of force but at the polling booths. The members of the ObIdient movement and other supporters of Peter Obi should wait till the time of the 2023 polls to give him their votes rather than causing unnecessary political tension in the country. Nigerians cannot be coerced into unanimously voting for Peter Obi or any other Igbo in the 2023 Presidential Elections.

The 2023 Elections would be a good litmus test where the flagbearers of the three major political parties test their popularity at the polls.  Rather than wait for that, the ObIdient movement laced with an IPOB tendency is making Peter Obi and indeed the Labour Party look like a force with an ulterior motive beyond the 2023 polls.

Let it be known to the Igbos that rather than carrying out the exploits of IPOB under the guise of the ObIdient movement, they should come out straight in their agitations. Campaign for secession should be separated from the campaign for the presidential ambition of Peter Obi. The ideology of IPOB should not be equated with the ideology of the Labour Party or that of Peter Obi.

The emergence of a third force in the polity is not just a welcome development, but highly desirable, since it will bring robust and heathy competition to the country’s electoral process. This will in turn provide the electorates with more viable options to choose from at the polls. Therefore, it is wrong for some Igbos to act out a secessionist agenda using the OBIdient platform as a guise. Peter Obi should not allow IPOB to hijack the ObIdient movement. This will make the generality of Nigerians not to see the ObIdient movement and the presidential candidacy of Peter Obi in good light. 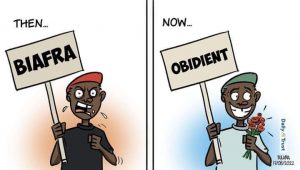 WHAT WILL HAPPEN WHEN A PETER OBI FOR PRESIDENT FAILS IN 2023?

What will happen when a Peter Obi for president fails in 2023? What will happen is the sentiment that will have been whipped up in every Igbo will mean a call for a Biafra state is easier canvassed for and even possibly a call to arm to achieve that aim. This will further drive home the IPOB’s agenda of the actualization of the independent Republic of Biafra. The remnant of the ObIdient movement could metamorphosed into members or allies of IPOB.

Violence will become a recurring factor in the South East against the Nigerian state on a scale resembling the posturing of war against Nigeria. Since, the ObIdient movement will have created a large pool of foot soldiers that IPOB can recruit into its fold; some members of the ObIdient movement could be forced to take the secessionist posture of IPOB, should Peter Obi fail to win the presidency come 2023.

Overall, 2023 will probably witness the beginning of the end for Nigeria as a nation state one way or another. Given the present fear of an imminent disintegration of Nigeria, the aftermath of the 2023 polls could be the last straw that breaks the camel’s back.

IS THERE A WAY TO DIAL BACK THE DOOMS DAY SCENARIO COME 2023?

The INEC should be allowed to conduct a credible election devoid of federal government interference so any loser will be adjudged to have lost fairly. An election that is considered by the majority of the people to be truly free and fair will help to assuage the feelings of the candidates and the supporters of candidates that lose out in the 2023 polls.

Peter Obi should not allow himself to be used to bring anarchy to the Nigerian state by been egged-on by a nationalist separatist group with aims to restore the Republic of Biafra. Therefore, it is imperative for Peter Obi to separate himself from IPOB or any other separatist movement. By so doing, he would be seen from the prism of a genuine presidential candidate and not as an IPOB kingpin.

The Igbos should genuinely decide if they want to be Nigerians or Biafrans and not hide behind the ObIdient toga to threaten and canvass for the downfall of the Nigerian state should they fail in their aim to “forcefully” enthrone their choice through the use of violence. The mischievous use of the ObIdient movement to actualize the State of Biafra by some Igbos is highly condemnable.

The 2023 presidential election will turn out to be one of a kind. Nigeria will emerge from the exercise broken and convulsed due to the toxicity that the prelude to the exercise will bring. The Igbos’ verbal assault on any Yoruba that support one of their own (Bola Ahmed Tinubu) will forever bring a distrust as never before. The Igbos will thus continue to regard the Yorubas (as they always have ) – a set of spineless, no good, use them lot. The Hausas/Fulanis will probably have a line drawn in the sand waiting for that unfortunate Igbo to cross and witness the great fury. The oil producing South-South will want more and more from their oil proceed if a Fulani or a Yoruba man takes the mantle of leadership in Nigeria come 2023. The die as they say is cast. We all wait with bated breath.