Exodus of Black Africans to Europe: A Deja vu with a difference. 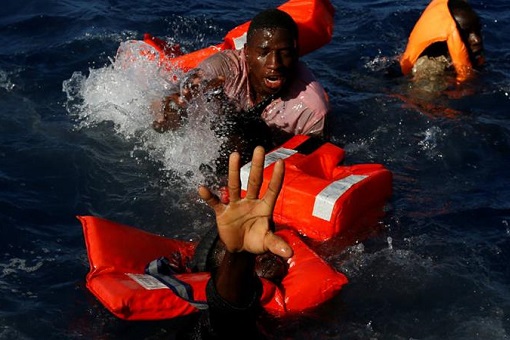 Many years ago, Colonel Muammar el-Qaddafi asked the European Union for five billion Euros to stop people leaving Africa from his native Libya. He warned, “Europe might no longer be European, and even black, as there are millions who want to come in… We don’t know what will happen, what will be the reaction of

Many years ago, Colonel Muammar el-Qaddafi asked the European Union for five billion Euros to stop people leaving Africa from his native Libya. He warned, “Europe might no longer be European, and even black, as there are millions who want to come in… We don’t know what will happen, what will be the reaction of the White and Christian Europeans faced with this influx of starving and ignorant Africans.”

Surprisingly, Col. Qaddafi’s racist fear-mongering seemed to work as the European Union agreed to pay him sixty million Euros – despite reports that he was transporting refugees to remote outposts in the Sahara and leaving them to die. Italy also struck deals with Qaddafi so that its navy could return migrants who had attempted the trip. But after his death in 2011, the bargain broke down – with the European Union Court of Human Rights declaring that forcefully returning Africans to Libya breached human-rights law.

Immigration from Africa to Europe has increased substantially in recent years. Many people from poor African countries embark on dangerous journeys for Europe in search of better lives – and the trafficking of immigrants to the “White-man’s continent” has become more lucrative than drug trafficking. Calm seas have also contributed to a surge in the number of people departing from the North African coast in overcrowded boats heading for Europe. Even though there are usually death stories – with over 6,000 immigrants dying in 2016 alone – a more bothering question would be why Africans still choose to escape their home countries by taking such risks. But what can be attributed to the situation other than bad governance, insecurity and economic malaise? Africans continue to cite different reasons for leaving their countries. Eritreans want to escape repression or military service, Somalis flee Al-Shabaab and clan warfare, and Nigerians are running away from recession, unemployment and a monstrous corrupt system. Many Africans put their lives at risk as they go on a boat journey in search of what they think would be a better and easier living. However, this journey – which usually begins in hope – often ends in despair.

The transatlantic slave trade began in the 15th century, after the Portuguese started exploring the coast of West Africa. At first the number of enslaved Africans taken was small. In about 1650, however, with the development of plantations on the newly colonised Caribbean islands and American mainland, the trade grew. During this period, Africans were forced into Europe through the Mediterranean and Red seas. They were tortured along the way so as to be kept humble – and remain loyal to their taskmasters – especially when they were insistent about remaining in their “black” countries. Unfortunately, despite the coming to an end of this barbaric era, certain Africans have chosen to impose on themselves similar sufferings experienced by the slaves of old. From more than 20 nations, heady/ignorant Africans converge in Libya as the funnel to Europe. The North African country is presently so lawless because it has been without a functioning government since 2011. However, even when many eventually realise the xenophobic nature of many Libyans, they choose to depart late at night – travelling across the Mediterranean sea in broad streams with Italy as their first port of call as gateway into Western Europe. The International organization for Migration (IOM) continues to bemoan the sharp increase in the number of sub-Saharan Africans making the dangerous journeys from Libya to Europe.

According to a 2015 “The Guardian” report, 87 percent of the 900, 000 migrants and refugees who crossed the Mediterranean into Europe arrived through Greece. This points to the extent of the risk Africans are willing to take so as to escape their home nations. But a causal factor belies with many African governments that have failed to uphold the social will of the people – which is an improvement in their standards of living.

Whilst many migrants in Libya face kidnapping, torture and robbery along smuggling route to Europe, others have alternatively chosen a relatively-stable and safe Egypt which is located where Asia, Africa, the Mediterranean sea and the Red sea meet. Spain is one of those “good” countries that have created legal migration routes for African migrants – and they continue to recruit workers from them, including Senegal.

Whereas many keep dying and others deported, travelling to Europe through a less-expensive route – the Mediterranean Sea – remains a deja vu (continuous unfortunate occurrence); and its major difference lies in the “never say never” attitudes of Africans, who will never learn from past scenarios but are willing to die trying. So the question need to be asked: Should we then cast aspersion on the white slave masters who invested in human cargo centuries ago or the unformed black chiefs who just like their descendants today make fleeing one’s ancestral home a given?