Can Peter Obi realistically win the Presidency in 2023? 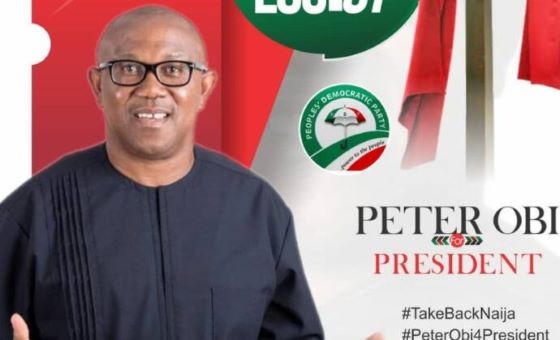 Peter Obi, the Igbos hope to capture central power in Nigeria is gradually making a transition from social media to towns and villages near you. A lot have been said about the prospect of Mr Peter Obi to ride the social media rave to Aso Rock. More have been emphasized in relation to his lack

Peter Obi, the Igbos hope to capture central power in Nigeria is gradually making a transition from social media to towns and villages near you. A lot have been said about the prospect of Mr Peter Obi to ride the social media rave to Aso Rock. More have been emphasized in relation to his lack of structure, monies and these being an integral requirement to make a “I Peter Gregory Obi swear that I will be faithful and bear true allegiance to the Federal Republic of Nigeria and that I will preserve, protect and defend the Constitution of the Federal Republic of Nigeria, so help me God” possible. But the OBIdient movement the Atikus and the Tinubus once discarded and merely referred to as mere social media noise is indeed taking form in the real space one banner after another. One then wonders, how realistically is an Obi presidency come 2023?

WHY HAS THE PETER OBI PHENOMENON CAUGHT ON?

One, the Igbos having been excluded for a long time in presiding over the affairs of Nigeria, and once again realizing their exclusion from the two major political vehicles to make that journey to Aso Rock possible latched on to a Peter Obi hope for 2023. The Igbos see Peter Obi as the platform to capture the power at the centre that has eluded them for decades. Having realized that they can no longer produced the president in 2023 through the two mainstream political parties in the country, the Igbos hence have put their hopes in the candidacy of Peter Obi to secure the most coveted and exalted office in the land.

Also, the failure of the APC and the PDP since 1999 to bring about meaningful financial, infrastructural and human developmental change in Nigeria is well documented and glaring for all to see.  Most Nigerians are already disillusioned and disenchanted with both the APC and the PDP. With the return to democratic rule in 1999 and twenty three years after, Nigeria has almost nothing to show for this epochal event!

Nigerian and Nigerians are obviously worse off under the administration of the politicians. The country was far better under the military. Although military rule can’t be justified under any circumstance as it is an aberration, outdated and uncivilized; but unfortunately, the country has been brought to her knees by years of mismanagement and bad governance by the successive civilian governments.

The euphoria and ecstasy that greeted the transition from military rule to democratic-elected civilian rule in 1999 have now metamorphose into despair, frustration and hopelessness for most Nigerians. Nigerians are now seeking an alternative to the APC and PDP. And some rightly see Peter Obi as that credible alternative. The much-touted dividend of democracy in the early days of the Fourth Republic has remained elusive up till date.

Equally, the emergence of Peter Obi can be ascribed to a “youthful movement” (initially via social media) that particularly abhor the same old politicians who have destroyed Nigeria up to this point. The Obidient Movement that started like a joke on the social media space has since gone on to gain traction and followings by Nigerians from different walks of life. Peter Obi’s popularity is soaring as the days go by. If this trend goes on till the time of the 2023 polls, then the unassuming presidential candidate of the Labour Party may cause an upset to the APC and PDP.

Another reason for the Peter Obi hysteria is the Buhari factor which the masses say have brought them nothing but hunger and despondency. Buhari’s unabashed nepotism and a perceived planned “fularisation” of Nigeria spurred a need for the two other major Nigerian ethnic tribes to capture power to advance their own interest in a Nigeria that is increasingly becoming frail as a nation state. The twin problem of insecurity and unprecedented economic hardship presently being experienced by Nigerians have so far nullify any claims of achievement(s) by the Buhari’s administration.

HOW ARE ELECTIONS WON IN NIGERIA?

In Nigeria, the ultimate and overriding factor that influences the choice of candidate that the electorate vote for during elections is ethnic consideration. Most Nigerians prefer to vote for a presidential candidate that is from the tribe they are from. Although this voting pattern is largely primordial, it is however the trend that had played out over the years.

At the time of elections in the country, Nigerians are always divided along ethnic lines. The only notable exception to this is in 1993, when Nigerians ignored ethnic and religious consideration to vote massively for the candidate of the Social Democratic Party, Chief MKO Abiola. It was Chief MKO Abiola’s larger than life persona and rare generosity that must have done this magic.

It is no longer news that elections and electoral process in Nigeria had always been characterized by vote buying, rigging, ballot box snatching, violence and different forms of electioneering manipulations. Most of the elections that have been held in the country are far from been free and far. This is because they are always fraught with malpractices and manipulations by candidates and their agents. This is facilitated by the collusion of some electoral officials and security operatives.

In recent times, vote buying has become a recurrent episode during elections. The culture of vote buying is promoted largely by the poverty that is widespread in the country. The economic hardship has reduced many Nigerians to ‘vote seller’. Therefore, they are forced to pander to the whims and caprices of politicians and their agents during elections.

Also, some political leaders are highly revered by the people. This leads to the allegiance of the masses to a cult figure who is celebrated and adored. During the first and second republics in Nigeria, the Awos, the Ziks, the Sardaunas, the Yar Aduas, and the Aminu Kanos of this world enjoyed a cult following. In contemporary Nigeria political scene, we have the likes of the ABAT Movement, The Articulate Support Group, the Kwankwassiya Movement and lately the Obidient Movement. In recent memory, Buhari equally rode to power through a cult following he commanded in the North. These and other factors presently dictate how elections are won in Nigeria.

WHAT HAS CHANGED SINCE THE ENACTMENT OF THE NEW ELECTORAL ACT 2002?

President Muhammadu Buhari eventually signed the much-anticipated Electoral Act Amendment Bill into law in February 2022. Some of the key provisions of this Act are: Early release of funds to INEC; Early conduct of party primaries and submission of candidates’ list; Candidates to seek judicial review of false information; Legitimization of E-Voting/Transmission of result; Political Appointee not eligible as voting delegate or aspirant; Provisions to be made for voters with physical disabilities, special needs and vulnerable persons; Redefinition of overvoting; Review of election results declared under duress; and Early commencement of campaign.

The enactment of the new Electoral Act of 2022 seems to have brought some element of sanity and decorum to the hitherto corrupt and chaotic electoral process in the country. The outcome of the Osun Gubernatorial elections is an eloquent testimony to this fact.

The introduction of the new Bimodal Voter Accreditation System (BVAS) is also geared to make the votes of the electorates to actually count. This is a radical departure from the days when candidates and politicians especially the incumbents and the ruling party can easily influence or manipulate the results of elections.

Also, it appears that President Muhammadu Buhari may not want to interfere or influence the electioneering process come 2023 to the advantage of the APC or any of the presidential candidates. His posture so far seems to suggests that he would oversee a free and fair election.

The aforementioned factors may play out to the benefit of Peter Obi or any of the other presidential candidates. Who says there are no underdogs in politics? We could be in for a great shock with the outcome of 2023 presidential polls.

WHAT ARE THE CHANCES OF PETER OBI MAKING IT TO ASO ROCK?

Peter Obi will probably make significant numbers in the South East given the movement started with the Igbos, maintained by the Igbos before a gradual collaboration with other regions and tribes ensued.  He will also get votes in the South South. The Okowa factor will however supersede the OBIDIENT phenomenon in South South states such as Delta and Bayelsa.

The party might and structure will work for the PDP in states such as River State, Akwa Ibom and Edo State. Cross River state will be split between the PDP and the APC with an insignificant Peter Obi votes in the state.

The APC will pick all the six South West States of Lagos, Oyo, Ondo, Osun, Ekiti, and Ogun. The presence of a large number of Igbos in the South West will however give some numbers to Peter Obi.

And north of the River Niger, the North Central, North West and North East will vote en masse either for the PDP or the APC. The Peter Obi numbers will thus be insignificant in the North.

If however the popularity of Peter Obi continues to soar up to the time of the 2023 polls, then he might as well give the presidential candidates of the APC and the PDP a good run for their money.

Although, the Peter Obi phenomenon is a good thing for Nigeria, the initial push by those of Igbo extract will however not be lost on others. In as much as Peter Obi is a viable option to the presidency of Nigeria, a lot of factors will still not make it possible for him to attain such status. One, Nigeria is still divided along ethnic and religious lines. He will therefore be pulling out a rabbit from a “okpu ozo” for a significant number of people from other ethnic tribes to vote for a Peter Obi who will not be running from the platform of the two significant political parties — the APC and the PDP with the national spread.

Moreover, recent verbal assaults and threats against the Yorubas by the Igbos will eventually dissuade progressive Yorubas to back out of the Obi ideology. Moreover, the BAT machinery and the Atiku power train when they come into full display will make the ObIdient noise look like mere baby babbles. Sooner it will be plain for all to see that elections, especially presidential elections in Nigeria cannot presently be won solely via social media and general bragado. And when it comes to threat of violence and power play, the big boys “got em” in huge supply and in reserve. After all, in Nigeria, power still pass power! And when money talks, bullshit they say go waka fast. Abi I lie?

Finally, poverty, illiteracy, monies, money politics, incumbency, Buhari factor, Igbo factor, are all reasons that will also make a Peter Obi presidency an impossibility come 2023. Nigeria is at a precarious point in nationhood. To make the numbers, a party indeed with the right structure is required to win a presidential election. Despite the sufferings in the land, the people are still too attached to their oppressors to be able to break free.  There are also a lot of people who understand little about data and statistics been reeled out by Peter Obi. The sight of a fast depreciating naira note still means more to them than data and statistics or even the promise of a utopia! In as much as the Igbos and other youths will drive the Obi movement, it will for the time being be just that … a movement.