Did Mugabe Destroy Zimbabwe Or Did Western Sanctions? 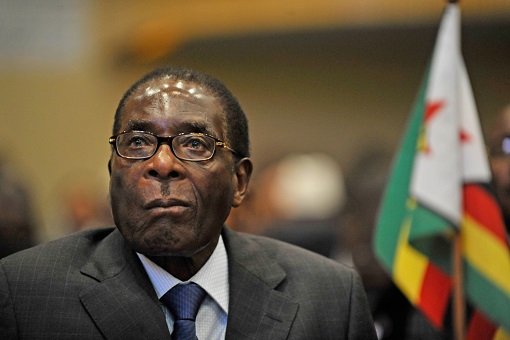 “Mugabe destroyed Zimbabwean economy.” This is all you hear in digital and print media. But is this the whole truth? After listening to the various commentaries by fellow Nigerians on Mugabe and Zimbabwe, I conclude that my countrymen have watched too much BBC, CNN, Fox News and listened to much western propaganda. Did Mugabe Destroy

“Mugabe destroyed Zimbabwean economy.” This is all you hear in digital and print media. But is this the whole truth? After listening to the various commentaries by fellow Nigerians on Mugabe and Zimbabwe, I conclude that my countrymen have watched too much BBC, CNN, Fox News and listened to much western propaganda.

For the avoidance of doubt, let me state from the outset that this article is NOT to exonerate poor leadership but to bring nuance and balance to the discussion about why Zimbabwe is in the state it is. I do not want to deflect the debate to African leaders – we know too much about their misrule. I want to focus on what the media should be talking about but they are neglecting to do

What Matters In Here

There is only one thing that matters in this entire Mugabe/Zimbabwe story, and it is called *western interest*. It comes before human rights, good governance and the welfare of African citizens. Let me explain.

Mugabe was allegedly brutalizing his own people way before 1994 when he was knighted by Queen Elizabeth of England. He did not get punished for any of it. Instead, the British Government rewarded him with a knighthood! The punishments only came when he decided to embark on land reform. Sanctions poured down like heavy rainfall under the pretext of “human rights abuse” and “bad governance.

Saudi Arabia has one of the worst human rights records in living history. Women are not allowed to drive, gay and apostates are imprisoned, beheadings and amputations still happen, but there are no sanctions on the country. The UK and American governments even supported the election of Saudi Arabia into the UN women rights commission in April 2017. They sell weapons to Saudi Arabia which are used to kill innocent children in neighboring Yemen.

Historically, America and Britain and other former European colonial governments have supported or even sponsored regime changes in disloyal African member states. Despotic African leaders have been propped up by the West for as long as they have protected colonial interests in their countries.

Independence is the power to govern yourself (as you see fit, I might add) and to put the interests of your own people first and above all other considerations. But when this power is undermined or taken away from you by repeated intrusions in your domestic affair, forceful coercion, sanctions, unfavorable trade terms and conditions, etc, then your independence is debatable. I am not exonerating bad leadership on the continent but Africa is free and independent only on paper.

We cannot talk about Mugabe and Zimbabwe without mentioning the Lancaster House Agreement (LHA) of 1979. The LHA provided for the Independence of Zimbabwe from Britain. It reserved 20% of seats in Zimbabwe’s House of Assembly for white people (3% of the population).

This effectively gave them a strong hand, if not veto power, in Zimbabwe’s House of Assembly. What type of independence is that? What type of democracy hands over power to a small group of people? Why are CNN and the BBC not talking about the LHA in any detail beyond just mentioning it?

What would you do if someone forcibly grabbed your land and refused to hand it back? Even into the 1970s, Ian Smith’s regime was forcing black people from their soil and about 97% of arable Zimbabwean land was in the hands of white people. Mugabe wanted to correct this but the LHA and the British Government would not let him.

He came to power, pledging that 160,000 black families would be resettled on white-owned soil within three years. Yet after 20 years of Mugabe’s rule, the picture was not hugely different. Just 6,000 white farmers occupied half of Zimbabwe’s 81m acres of arable land. About 850,000 black farmers were crammed into the rest. Since independence, only 10% of arable land has moved legally from white to black hands. (https://www.theguardian.com/world/2002/jan/16/zimbabwe.chrismcgreal)

Mugabe was pressured by the LHA to wait ten years before instituting land reform. When this time elapsed, the British government reneged on its land reform promises thus leaving Mugabe little choice than to start retaking lands from white farmers.

This was what led to the crippling sanctions against Zimbabwe. But these were imposed under the pretext of human rights abuse. When Mugabe’s army reportedly attacked a village killing thousands of black people (the Gukurahundi massacres of 1983-1984), Britain and its allies did not want to know about human rights abuses then.

In fact, he was rewarded with a knighthood in 1994, more than ten years after the massacres. But as soon as Mugabe started re-taking lands from white people to give back to black people, suddenly he was committing human rights abuse!

Writing in the Telegraph in 2015 when he was the mayor of London, Boris Johnson, the current British foreign secretary, had this to say about the role played by the British Government in creating the disaster in Zimbabwe:

“Zimbabwe is now the second poorest nation on earth – beaten only by Congo for overall grimness. The people are so badly malnourished that one in three children is physically stunted, according to the UN. If you go there you see the ravages of HIV, the emaciated figures standing listlessly on street corners. Companies are constantly going to the wall.

“But it is vital to recognize that Zimbabwe was not always like this, and did not have to be like this. This Mugabe tyranny is no accident – and Britain played a shameful part in the disaster.

Readers will remember the 1979 Lancaster House Agreement, by which Margaret Thatcher granted independence to Rhodesia. At that time the country was a breadbasket, a flourishing agricultural producer, with about 6,000 commercial farmers.

The only trouble with those farmers was that the most successful of them were white – and Mugabe’s long reign has been characterized by one overwhelming objective: to exterminate the last vestiges of white power, whether political or economic.

“It was Labour’s betrayal of the Lancaster House Agreement – driven by political correctness and cowardice – that gave Mugabe the pretext for the despotic confiscations by which he has rewarded his supporters.” (http://www.telegraph.co.uk/news/politics/labour/11428364/Happy-birthday-Mr-Mugabe-with-special-love-from-Labour.html)

Western media control the narratives about Africa. This is a legacy of our colonial past. They are the major news source on the continent, and as far as we are concerned, it is not news-worthy if CNN or the BBC has not carried it. He who feeds you news also controls your thought process.

Mandela was a “terrorist” – according to the imperialists. But his offence was trying to liberate his people from the oppression of white-rule (Apartheid). They imprisoned him for 27 years.

They let him out and ALLOWED him to be the first president of South Africa after they had extracted an agreement from him to let bygones be bygones.

And because he played according to the scripts and did not attempt to usurp their hegemony, they turned him into a global superstar and a hero. But long before this (when he was still a terrorist purely by western terms) he was our true hero, only that we lacked the power to tell the world our own story.

Sanctions are immoral. The economies of America and Britain – the biggest protagonists of sanctions against Zimbabwe – will not survive beyond a few months if you freeze loans and stop other nations from trading with them. Sanctions are even more immoral when they are imposed on a poor developing country.

They punish ordinary citizens only and do nothing to the political elites. Whilst poor Zimbabwean children starve and have no access to medicine, Grace “Gucci” (Mugabe’s wife) shops designer brands and the Mugabe boys pour wine on expensive wristwatches. It is time for the world to rethink the morality of sanctions. Mugabe might have destroyed Zimbabwe but he did not do it alone.

As the crocodile takes over rulership of Zimbabwe from Mugabe, I predict that the sanctions will be eased as the lands returned to their former owners.

The crocodile, ZANU-PF party, and the military propped up Mugabe for 37 years. I do not believe that the lot of ordinary Zimbabweans will be much different under the new regime. But as long as the regime protects colonial interests in Zimbabwe, it will enjoy favorable western propaganda and support. By Dr. Ijabla Raymond