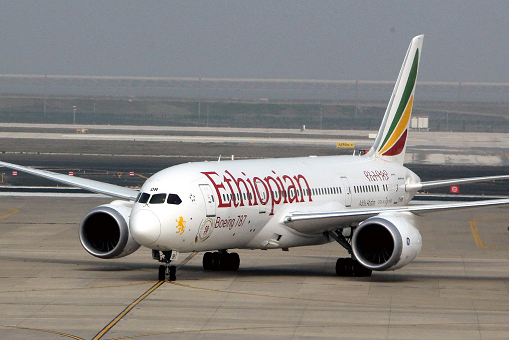 Ethiopian Airlines is a unique symbol of pan-Africanism and definer of African Renaissance. It is currently Africa’s fastest-growing and most-profitable airline – serving a network of well over 113 passenger destinations. Headquartered at Bole International Airport Addis Ababa, this state-owned carrier spreads beyond borders, touches down in diverse international countries, and serves as the official

Ethiopian Airlines is a unique symbol of pan-Africanism and definer of African Renaissance. It is currently Africa’s fastest-growing and most-profitable airline – serving a network of well over 113 passenger destinations. Headquartered at Bole International Airport Addis Ababa, this state-owned carrier spreads beyond borders, touches down in diverse international countries, and serves as the official airline for the prestigious African Union Commission (AUC), Addis Ababa, Ethiopia.

According to a research conducted by Jovago, seven high flying (excuse the pun) airline companies in Africa are worthy of note.

Ethiopian Airlines’ Success compared to others

That Ethiopian Airlines serve excellently despite being completely-owned by an African government is a sweetening truism worthy of our collective commendation. Many African governments are perceived as irresponsible and incapable of finely managing or creating any infrastructure.

The Republic of Zambia failed to effectively maintain its Zambian Airways, which was founded in 1964 but ceased operation in 1995 due to a worsening economic climate. It was the same case with Nigeria Airways, which was founded in 1958, but ceased operations in 2003 because of mismanagement, corruption and overstaffing. Recently, South African Airways seem to be struggling as it appears to be plagued with poor quality of management.

Noticeably, Ethiopian Airlines is vital to the development and facilitation of business, trade, tourism and social interaction within and outside the African continent.

The secret of its success lies in the ability of the Ethiopian government to maintain a focused attention on the company – whilst building and expanding its networks; using national funds when necessary.

This carrier has been government-owned since its creation in 1945. Its current chairman is Ethiopia’s Deputy Prime Minster, and most of its board members are leading government figures – including the Minister of Transport and the Minister of Mines.

It also suffices to note that hard work pays tremendously at the Ethiopian company as even their current Group CEO, Tewolde Gebremariam – now a titan of the aviation industry – started working for the airline in 1985 as an officer in the Cargo Traffic Handling Department and eventually worked his way up.

Plans are reportedly in place to build a 1.2million tonne annual capacity cargo terminal at the prestigious Bole International Airport, something a bit smaller than that of London’s Heathrow – Europe’s 4th largest. This would be a milestone for Ethiopian Airlines.

This Star Alliance Member’s success can be attributed to the establishment of a multi-hub system. According to the Vice President for Strategy and Alliance at Ethiopian Airlines, Henok Teferra Shawl, “Africa is a huge continent, so one hub serving the continent from Addis Ababa we felt was not enough”. They already bought the failing ASKY Airlines in Togo and Air Malawi.

In December 2015, Ethiopian Airlines celebrated its 70th anniversary; and according to Hennock Lemma Nigatu, the Director for Germany and Central Europe, the Star Alliance Member envisages an “annual turnover of $10 billion from the current figure of $2 billion”. This Ethiopian company is making Africa proud; it is undoubtedly thriving to meet the increased demand for air travel on the continent.