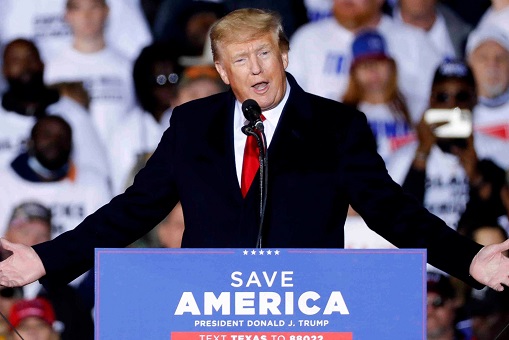 Former US President Donald Trump, have been battling with series of cases in recent time, a prosecutor investigating if the former President broke the law by pressurizing officials in the state of George to overturn Joe Biden’s 2022 presidential win. Has told the FBI to help as Donald Trump protest against prosecutors investigating him. Fulton

Former US President Donald Trump, have been battling with series of cases in recent time, a prosecutor investigating if the former President broke the law by pressurizing officials in the state of George to overturn Joe Biden’s 2022 presidential win.

Has told the FBI to help as Donald Trump protest against prosecutors investigating him. Fulton County District Attorney Fani Willis had written to the FBI office on Sunday, requesting for assessment of the country courthouse and government offices, and also for the FBI to provide protective resources, inclusive of intelligence and federal agents.

Fani Willis, open an investigation last year to look into any improper attempt to influence the 2020 general election in Georgia by Trump and his associates, a grand jury will be seated on May 2 to aid in the investigation.

According to Willis, “my staff and I will not be influenced or intimidated by anyone as this investigation moves forward”.

Fani Willis investigation is one of the several ongoing probes into Donald Trump conduct, it could be recalled that the authorities in the New York are also investigating allegations of financial fraud in Trump’s real estate business. And also, the US House of Representatives committee is investigating Trumps actions related to the January 6, 2021 riot by the former president supporters at the US Capitol.

Donald Trump in a political rally in Texas, had trash out at prosecutors looking into his actions, addressing them as “vicious, horrible” people.

“If these radical, vicious, racist prosecutors do anything wrong or illegal, I hope we are going to have in this country the biggest protest we have ever had in Washington, DC, in New York, in Atlanta and elsewhere because our country and our elections are corrupt”,  Donald Trump stated during the Saturday night rally near Houston, Texas.

Fani Willis, has stated that her office has already taken steps to address security concerns in response to communications we have received from persons unhappy with our commitment to fulfil our duties. she also said she was working with county officials on extra security measures.

“We must work together to keep the public safe and ensure that we do not have a tragedy in Atlanta similar to what happened at the United States Capitol on January 6, 2021”, she wrote in the letter to the FBI.

One hopes all issues will be sorted out soon.

Fani T. Willis born 1971/1972 is an American politician and an attorney from the state of Georgia. She is the district attorney of Fulton County, Georgia.

Willis graduated from Howard University and Emory University School of Law. She spent 16 years as a prosecutor in the Fulton County district attorney’s office. Her most prominent case was her prosecution of the Atlanta Public Schools cheating scandal. In 2018, she went into private practice. That year, she ran for a seat on the Fulton County Superior Court, and lost. In 2020, Willis was elected district attorney for Fulton County, defeating Paul Howard, a six-term incumbent and her former boss.

A leading U.S. counter-terrorism, counterintelligence, and criminal investigative organization, the FBI has jurisdiction over violations of more than 200 categories of federal crimes.

Although many of the FBI’s functions are unique, its activities in support of national security are comparable to those of the British MI5 and the Russian FSB. Unlike the Central Intelligence Agency (CIA), which has no law enforcement authority and is focused on intelligence collection abroad, the FBI is primarily a domestic agency, maintaining 56 field offices in major cities throughout the United States, and more than 400 resident agencies in smaller cities and areas across the nation. At an FBI field office, a senior-level FBI officer concurrently serves as the representative of the Director of National Intelligence”. This section is culled from WIKIPEDIA. https://en.wikipedia.org/wiki/Federal_Bureau_of_Investigation