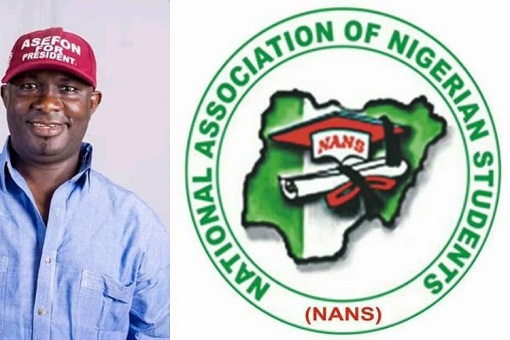 The National Association of Nigerian Students(NANS) has expressed great disappointment over the strike action embarked upon by the Academic Staff Union of Universities (ASUU), stating that the Federal Government has refused to resolve issues with the union amicably. In a statement by the President of  the National Association of Nigerian Students President, Asefon Sunday, he

The National Association of Nigerian Students(NANS) has expressed great disappointment over the strike action embarked upon by the Academic Staff Union of Universities (ASUU), stating that the Federal Government has refused to resolve issues with the union amicably.

In a statement by the President of  the National Association of Nigerian Students President, Asefon Sunday, he expressed  great disappointment over the one- month warning strike announced by ASUU President, Emmanuel Osodeke.

The President of the  National Association of Nigerian Students , who was really annoyed over the strike had condemned the Federal Government and the ASUU’s leadership for failure to resolve their differences without resorting to strike, stating that the Nigerian students will stage a nationwide protest to demonstrate their dissatisfaction with the unfolding events.

In a statement titled, ‘ASUU Warning Strike: A Reckless Irresponsibility’, signed by the NANS President, Asefon Sunday said, “We have received the news of the decision of ASUU to embark on a month warning strike with great disappointment. We have thought ASUU and FG represented by top executives would allow reason to prevail, reached compromise, act responsibly in the interest of the education sector and indeed Nigeria, to do all that is required to responsibly avert this avoidable strike.

We are appalled by the impunity, recklessness, and irresponsibility the managers of this negotiation from both sides of the table have managed the fragile situation allowing it to degenerate to the level of industrial action. We are therefore compelled to believe that negotiators from both sides acted so irresponsibly because of their apathy of the interest and welfare of the major stakeholder of the sector(students) during the negotiations.

We are equally disappointed at the government for not doing everything possible to avert this embarrassment. We are also disappointed with the ASUU for reaching this conclusion irrespective of the implications to the students, academic calendar, research they claim to love, national security, and sanity.

The Government and ASUU by this action sent a direct message to Nigerian students to also take positions comfortable for our side of the table irrespective of the implications. Let me say equivocally that we will respond in clear language, the language the oppressors understand.

I passionately appeal to all students’ leaders, NANS structures, and organs across the nation to mobilize to our national non-elective congress on the 17th of February where far-reaching decisions shall be made on our collective response to this blatant lack of patriotism, human feelings, and feelings for the collective future of education in Nigeria.

Our decisions shall be decisive, collective, and irreversible until the strike is called off. We shall fight this impunity and recklessness without any consideration other than an immediate end to this strike.

We, therefore, inform the Minister of Labour, Chris Ngige, to expect us in our numbers, and ASUU should be ready to return to the table to end this avoidable, reckless and repugnant strike. Let me assure the Minister of Labour that our protest in his office today is introductory and child play in what is yet to come. We are resolute more than before to ensure we hold government, especially the ministry of labour responsible for these incessant strike actions.

Further negotiations should as a matter of urgency have student’s representative as part of the parties to allow balance in decisions that are capable of impairing the lives of students and derailing their progress. The contentions and issues are triangular and must be treated so, going forward.”

Sometimes in 2020, the Academic Staff Union of Universities had embarked on a nine-month strike. It was called off after several meetings and discussions between the government and the lecturers.