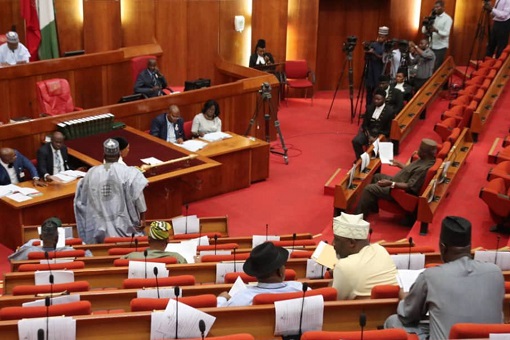 The Electoral Act Amendment Bill has been received by President Muhammadu Buhari on Monday. This was sent by the National Assembly Nigeria for the President to give assent to the earlier rejected bill sometime in December. National Assembly transmit bill to Buhari. The President had earlier vetoed the bill stating that consensus mode should be

The Electoral Act Amendment Bill has been received by President Muhammadu Buhari on Monday. This was sent by the National Assembly Nigeria for the President to give assent to the earlier rejected bill sometime in December.

The President had earlier vetoed the bill stating that consensus mode should be included of which the National Assembly Nigeria and the Senate have amended the harmonized version of the bill which includes clause 84, the direct, indirect, and consensus modes.

The Attorney-General of the Federation, Abubakar Malami had advised the President in December 2022 against signing the Electoral Act, due to mandatory the inclusion of the primary mode of selection which has now been removed from the bill by the National Assembly Nigeria.

The Independent National Electoral Commission has disclosed that the ability to transmit the election results across the country is valid. But the NCC kicked against it stating that the country’s internet is not strong enough for coverage across the country. The Senate has thus told the Independent National Electoral Commission (INEC) to seek consent from the NCC and the Legislature before the electronic transmission of results.

A government official said, “The President has received the bill. As usual, he will be seeking clarification from critical stakeholders before signing the bill. However, we don’t expect him to delay the bill by 30 days like the last time because we are running out of time”.

Speaking on Abubakar Malami input in the bill, he further stressed, “There is no bill that Buhari signs without consulting Malami. He is the Attorney-General of the country and one of the President’s men. The NCC, NITDA, and the Ministry of Communications and Digital Economy will also play a critical part”, the official added.

Senator Babajide Omoworare, Senior Special Assistant to the President on National Assembly Matters, disclosed this in the statement he signed after the transmission of the bill.

This was done in accordance with the provisions of Section 58 (3) of the 1999 Constitution of the Federal Republic of Nigeria (as amended) and the Acts Authentication Act Cap. A2 LFN 2004.

Mr. President had withheld assent to the Electoral Bill 2021 transmitted to him on November 19, 2021. The electoral bill was thereafter reworked by the National Assembly and both the Senate and the House of Representatives passed the same on 25th January 2022”.

Now that the bill has been reworked and transmitted to the President, one hopes the President gives his assent soon.

The Nigerian Communications Commission (NCC) is the independent regulatory authority for the telecommunications industry in Nigeria. The NCC was created under Decree number 75 by the [Federal Military Government of Nigeria] on 24 November 1992.

The NCC was charged with the responsibility of regulating the supply of telecommunications services and facilities, promoting competition, and setting performance standards for telephone services in Nigeria. The Decree has been abrogated and replaced with the Nigerian Communications Act (NCA) 2003. Umar Garba is the present head of (NCC) assumed office since 2015.