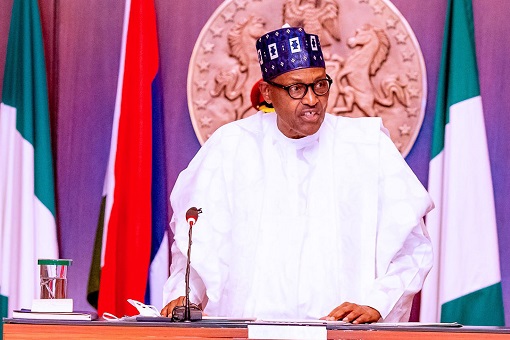 President Muhammadu Buhari made so many promises during his campaign of the 2015 general elections. Now in the twilight of his administration, the President has asked Nigerians to be fair in their assessment of what his government has, so far, achieved. Buhari states Nigerian will get better. The President also assured that his administration was

President Muhammadu Buhari made so many promises during his campaign of the 2015 general elections. Now in the twilight of his administration, the President has asked Nigerians to be fair in their assessment of what his government has, so far, achieved.

Buhari states Nigerian will get better.

The President also assured that his administration was determined to hand over a better Nigeria than the one they inherited. The President who is on a 2-day visit to Kaduna state to commission projects spoke in Kafanchan at the Emir of Jema’a, Alhaji Muhammadu Isa’s Palace.

He assured Nigerians that his administration was determined to unfold programs that would improve the lives of Nigerians. Speaking on security, the President beseeched that citizens should have confidence in the ability of the security agents to bring the situation to normalcy.

The President further said, he was against anyone who would want to raise an army of thugs, “This must be very clear.” He reiterated.

Kaduna State Governor, Nasir El-Rufai, in his remarks, said, President Muhammadu Buhari has done so well on security.  According to him, the President’s investment in security has lessened attacks. Kafanchan, he noted, has become much safer than it used to be.

The Emir of Jema’a also called for the establishment of a permanent base for the Air Force and the Mobile Police in his domain.  He further requested the restoration of the rail transport from Kafanchan to other places across the nation.

Nasir Ahmad El-Rufai born 16 February 1960 is a Nigerian politician who is the Governor of Kaduna State, has been in office since 2015. He was previously the Minister of the Federal Capital Territory from 2003 to 2007, and the director of the Bureau of Public Enterprises. He is a co-founder of the ruling All Progressives Congress.

It must be noted that insecurity is a major issue in Nigeria in recent times.  The government however seems to be working tirelessly to put a stop to it.

“Kaduna State is a state in northern Nigeria. The state capital is its namesake, the city of Kaduna which happened to be the 8th largest city in the country as of 2006. Created in 1967 as North-Central State, which also encompassed the modern Katsina State, Kaduna State achieved its current borders in 1987.

The fourth-largest and third most populous state in the country, Kaduna State is nicknamed the Centre of Learning, owing to the presence of numerous educational institutions of importance within the state such as Ahmadu Bello University.

Modern Kaduna State is home to the sites of some of Africa’s oldest civilizations, including the Nok civilization that prospered from c. 1500 BC to c. 500 AD. In the 9th century, geographer and historian Ya’qubi documented the existence of the Hausa Kingdoms, which existed until the region was incorporated into the Sokoto Caliphate in the early 1800s following the Fulani War. During the colonial era, the city of Kaduna was made the capital of Northern Nigeria Protectorate by British leadership.

The name Kaduna is believed to be a corruption of the Hausa word Kada, which means crocodile; the Kaduna River previously hosted a large crocodile population. The state economy is dependent on agriculture, especially cotton and groundnut production.

In the modern era, Kaduna State has been the site of violent ethnic and religious conflict, with the 2002 Miss World riots in the state capital over purported blasphemy leading to around 250 deaths and the loss of homes for around 30,000”.This section is culled from WIKIPEDIA. https://en.wikipedia.org/wiki/Kaduna_State.