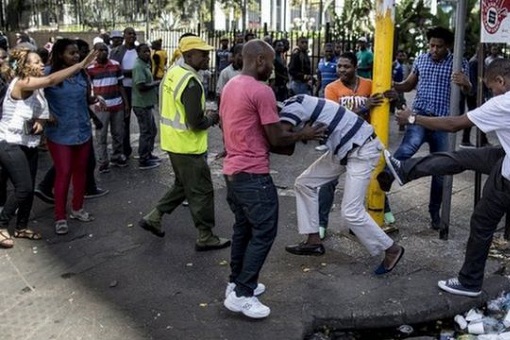 Xenophobia, according to Wikipedia, is “the fear of that which is perceived to be foreign or strange. It can manifest itself in many ways involving the relations and perceptions of an in-group towards an out-group, including a fear of losing identity, suspicion of its activities, aggression, and desire to eliminate its presence to secure a

Xenophobia, according to Wikipedia, is “the fear of that which is perceived to be foreign or strange. It can manifest itself in many ways involving the relations and perceptions of an in-group towards an out-group, including a fear of losing identity, suspicion of its activities, aggression, and desire to eliminate its presence to secure a presumed purity”.

Bearing this definition in mind, one would agree that South Africa and xenophobia are synonymous. The country’s young people, especially, have continued to spark aspersions on “African foreigners”; and this has led to deaths, severe injuries and loss of properties in recent years.

Even though most of the African immigrants – who initially pretended to be asylum seekers – are essentially economic refugees, it is rather uncivilized and illogical for South Africans to brand all Nigerians, Zimbabweans and Mozambicans as drug pushers, criminals and prostitutes.

Most of their attacks on these foreigners are erroneously inspired by mere suspicion; and this has somewhat promoted attacks on the innocent and more fragile people – than on the supposed culprits.

These South African youths believe that the existence of other Africans is the reason why they are unemployed, and if they go back to their countries, employment would come.

But how do we consider the justification of their evil reaction when their attacks are made on successful retailers, and small business owners – who are rather creating small jobs and contributing to the economy of South Africa?

Those South African locals surely understand that this class of Africans do not block formal employment opportunities as they are not formal office employees; but why they choose to committedly continue perpetrating evil remains a mystery.

It is no secret that the king of Zulu, Goodwill Zwelithini, also contributed to the incessant xenophobic violence in recent years. His speech in Pongola, where he stated that “foreigners from other parts of Africa should go back” seems to be the motivating – or rather confusing – factor sponsoring the attacks on foreigners from 2015 until now. If South Africans are angry about the millions of immigrants that troop into their country annually, there are better ways to tackle such issues – instead of inciting violence.

Policies can be applied! The government of South Africa could use strong policies to tackle the concerns of South African locals so as to prevent the continual occurrence of such scary reactions. From 2001, 2008, 2015 to 2017, some of the xenophobic videos uploaded on the internet are really very scary… Futuristic attacks can be avoided.

It is not enough for SA government officials to correctly castigate the xenophobic act as was done last week, something needs to be done to prevent the transpirations in the next coming years.

Whereas nothing is done by President Jacob Zuma and his team of government officials to put a stop to this “madness”, South Africans and their investments in other African nations may come under similar attacks or even threatened with death.

We cannot continue to raise our machetes and deadly weapons on our African brothers and sisters; there is the need to understand our shared values. The time has come for solutions to be found for this inherent hatred South African indigenes project on their fellow African.

Nigeria’s Emeka Uhanna – a shop-owner in Johannesburg who was interviewed by the British Broadcasting Corporation (BBC) told the world that he is worried about the xenophobic attacks on African foreigners.

He said, “I’ve been living in South Africa since 1997, my wife is South African and we have two children, aged 14 and 16. My wife is worried about what future our children will have if the xenophobic attacks become the norm. We don’t know how to explain the hatred against Nigerians to our families, to our children.

This is the third round of attacks against foreigners; one was in 2008 where people were killed, again in 2015.” Emeka’s worries is actually the same with those of many Africans.

Isn’t it time for South Africans to tell themselves the truth? There is a problem of hatred which needs to be tackled – and quickly – so that it doesn’t spread into the future generations to completely destroy our common pursuit of love, unity and oneness as Africans.

Today, African investors are scared about doing business in South Africa, psyches are been affected as many are afraid of what may happen next, small business owners are parking up so as to avoid further loss, and people are dying or getting severely injured daily.

These negative effects, amongst others, need to be effectively tackled; and for this to be efficiently done, South Africa – and indeed the African Union – ought to step in to put things rightly. It is better to diplomatically use policies to convince and prevent more African from coming into the country – than to allow some angry indigenous mob pounce on humans like animals. By U. M. Eni