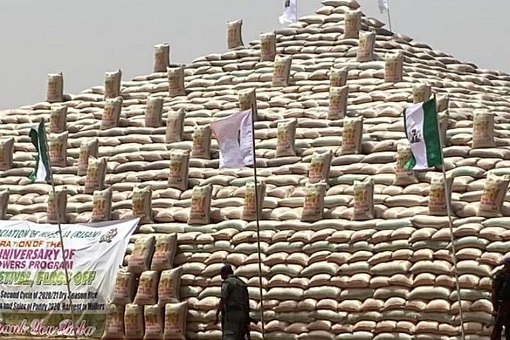 President Muhammadu Buhari has unveiled the one million bags of rice paddy stacked as pyramids in Abuja, the nation’s capital. The collaboration is one between the Central Bank of Nigeria (CBN) and the Rice Farmers Association of Nigeria (RIFAN).  Buhari uncover rice pyramids. Being taunted to be the biggest of its type in Africa, the

President Muhammadu Buhari has unveiled the one million bags of rice paddy stacked as pyramids in Abuja, the nation’s capital. The collaboration is one between the Central Bank of Nigeria (CBN) and the Rice Farmers Association of Nigeria (RIFAN).

Being taunted to be the biggest of its type in Africa, the pyramids are located on the grounds of the Abuja Chamber of Commerce and Industries (ACCI) on Airport Roads in Abuja. The one million bags of rice were built, planted, and harvested from different states across the country under the Anchor Borrower’s Program (ABP).

The one million bags of rice paddy were planted and gathered from different states around the country to help support the rice pyramids.  going further farmers were asked to return the bags of rice of paddy that made up the pyramids in exchange for cash in order to pay up the loans they received under the ABP.

It must be noted that since the inauguration of the ABP in November 2015, it has helped increase the average yield of rice per hectare from 1.8 metrics to five metric tones, discouraging importation of the commodity.

The report reads, “The ABP has enabled 95 percent reduction of Nigeria’s annual bill from 1.5 billion dollars in 2015 to 18.5 million dollars. It has also created 12.8 million direct and indirect jobs across different value chains and food belts of the country”.

“ABP is an agricultural loan scheme launched in 2015 by the federal government through the Central Bank of Nigeria (CBN). It was designed to boost agricultural yields, halt large volumes of food importation and address negative trade balance”.

Despite the challenge of the COVID-19 pandemic and persisting insecurities in the country, the Central Bank of Nigeria was able to work efficiently with stakeholders to spark farmers to reap plentiful harvests.

“The Central Bank of Nigeria (CBN) is the central bank and apex monetary authority of Nigeria established by the CBN Act of 1958 and commenced operations on July 1, 1959.

The major regulatory objectives of the bank as stated in the CBN Act are to: maintain the external reserves of the country, promote monetary stability and a sound financial environment, and act as a banker of last resort and financial adviser to the federal government.

The central bank’s role as lender of last resort and adviser to the federal government has sometimes pushed it into murky regulatory waters. After the end of imperial rule, the desire of the government to become pro-active in the development of the economy became visible especially after the end of the Nigerian civil war, the bank followed the government’s desire and took a determined effort to supplement any shortfalls in credit allocations to the real sector.

The bank soon became involved in lending directly to consumers, contravening its original intention to work through commercial banks in activities involving consumer lending. However, the policy was an offspring of the indigenization policy at the time.

Nevertheless, the government through the central bank has been actively involved in building the nation’s money and equity centers, forming securities regulatory board and introducing treasury instruments into the capital market”. This section is culled from WIKIPEDIA. https://en.wikipedia.org/wiki/Central_Bank_of_Nigeria.