Russia will pay highly if it attacks Ukraine – says Germany. 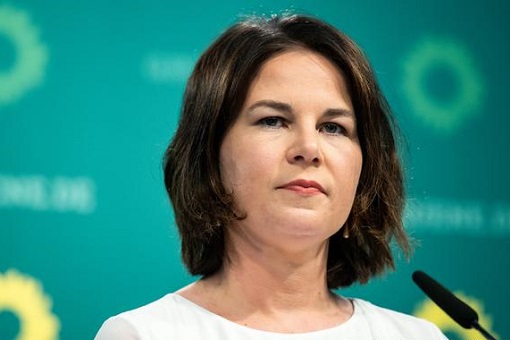 Annalena Baerbock, the new Germany’s foreign minister, had said that Russia will pay “highly” if it attacks Ukraine. She also stated that she hopes the tension between Moscow and Kyiv would be resolved amicably. Annalena Baerbock speaks on Russia and Ukraine crisis. The new minister who spoke on Monday in Kyiv, is taking a tour

Annalena Baerbock, the new Germany’s foreign minister, had said that Russia will pay “highly” if it attacks Ukraine. She also stated that she hopes the tension between Moscow and Kyiv would be resolved amicably.

The new minister who spoke on Monday in Kyiv, is taking a tour to Moscow to talk with Russia and Western states on the Kremlin’s deployment of tens of thousands of troops along the Ukraine’s border which ended with no breakthrough. The United Stated had reported last week that Russia was preparing a pretext to invade Ukraine, which Moscow had denied. A cyber-attack against Ukraine has heightened the concern.

According to Annalena Baerbock, she stated that Moscow, which has amassed troops on the Ukraine’s borders would suffer severely if it launched an attack. “Each further aggressive act will have a high price for Russia, economically, strategically, politically. Diplomacy is the only way.” She added.

However, despite the border deployment, Moscow who had denied the plans to attack Ukraine and has demanded NATO stops its eastward expansion. Olaf Scholz, German Chancellor, who visited Madrid stated that, “everything must be done to avoid military intervention in Ukraine”.

According to State News, Russian military forces and hardware were arriving in Belarus after Minsk announced the neighbors with stage joint man oeuvres next month.

Ukraine’s Kuleba said “Kyiv and Berlin were united in pushing to revive four-way peace talks on ending the war in eastern Ukraine in the so-called “Normandy” format, which includes Germany, France, Ukraine and Russia.

Ukraine has received reassurance from allies that no decisions would be taken about its future without it assent or involvement.

“It is important for us now that neither Berlin nor Paris makes any decisions about Ukraine without Ukraine, and does not play any game behind our backs in relations with Russia. This is the key now,” Mr. Kuleba had said.

Despite so many intervention talks and diplomacy since last week, Russia and NATO are yet to reach a compromise.

Annalena Charlotte Alma Baerbock born 15 December 1980 is a German politician serving as the German Federal Minister for Foreign Affairs since 2021. She has also served as co-leader of Alliance 90/The Greens since 2018 alongside Robert Habeck. She was the party’s chancellor candidate in the 2021 federal election, making her the first such candidate for the Greens and, after Angela Merkel, only the second woman to be nominated for chancellor by a major German political party.

“Germany officially the Federal Republic of Germany, is a country in Central Europe. It is the second-most populous country in Europe after Russia, and the most populous member state of the European Union. Germany is situated between the Baltic and North seas to the north, and the Alps to the south; it covers an area of 357,022 square kilometers (137,847 sq mi), with a population of over 83 million within its 16 constituent states.

It borders Denmark to the north, Poland and the Czech Republic to the east, Austria and Switzerland to the south, and France, Luxembourg, Belgium, and the Netherlands to the west.

The nation’s capital and largest city is Berlin, and its financial center is Frankfurt; the largest urban area is the Ruhr. Various Germanic tribes have inhabited the northern parts of modern Germany since classical antiquity.

A region named Germania was documented before AD 100. In the 10th century, German territories formed a central part of the Holy Roman Empire. During the 16th century, northern German regions became the center of the Protestant Reformation.

Following the Napoleonic Wars and the dissolution of the Holy Roman Empire in 1806, the German Confederation was formed in 1815. In 1871, Germany became a nation-state when most of the German states unified into the Prussian-dominated German Empire. After World War I and the German Revolution of 1918–1919, the Empire was replaced by the semi-presidential Weimar Republic”. This section is culled from WIKIPEDIA. https://en.wikipedia.org/wiki/Germany