Saudi Arabia: Giving the US the middle finger. 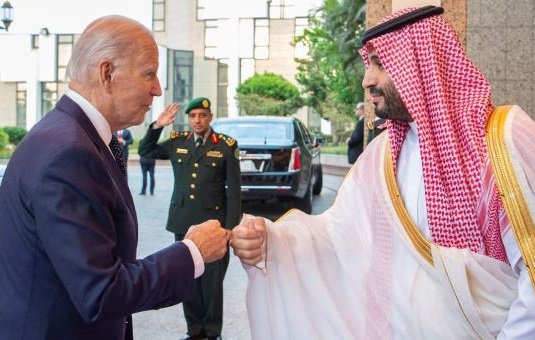 President Joe Biden’s foreign policy it must be stated have been a series of missteps and mixed bags since the inception of his regime. But his visit to Saudi Arabia to beg Saudi crown prince, Mohammed bin Salman Al Saud to pump more crude oil in order to ease pressure on pump prices at home

President Joe Biden’s foreign policy it must be stated have been a series of missteps and mixed bags since the inception of his regime. But his visit to Saudi Arabia to beg Saudi crown prince, Mohammed bin Salman Al Saud to pump more crude oil in order to ease pressure on pump prices at home must take the cake for the worse of his blunders.

THE US, SAUDI RELATIONSHIP OVERTIME.

The September 11 attack on the World Trade Centre in 2001 marked a watershed in the history of the relations between the US and Saudi Arabia. 15 0f the attackers that participated in the attacks were Saudis. Also, Saudi Kingdom was the birthplace of Osama Bin Laden, the leader of al-Qaida and the mastermind of the attack.

September 11 attacks was the impetus that led to the rethinking of the US-Saudi relationship by both countries. After the attacks of September 11, 2001, the US and Saudi Arabia began working together against a common enemy that the Saudis had already been fighting for years: Violent Islamist extremists. Saudi intelligence services had agents throughout the Muslim world sniffing out jihadist threats to the Kingdom; the US was under-resourced in these countries and badly needed help, which the Saudis were happy to provide. The global war on terror, as George W. Bush termed it, in many ways repeated the grand US-Saudi strategic alliance against the Soviet Union. In 2003, the U.S. withdrew most of its troops from Saudi Arabia, though one unit still remains.

The 2010 US arms sale to Saudi Arabia is another epochal event in the history of the relations between the two countries. It was the biggest arms sales in American history (about $60.5 billion purchased by the Kingdom of Saudi Arabia. The US was eager to point out that the arms deal would increase “interoperability” with US forces.

After 2000, the US developed cost-effective techniques to produce oil and gas. As a result of this, the US became an exporter rather than depending on purchases from Saudi Arabia or any other Middle Eastern country. In spite of this, the US and Saudi Arabia maintained cordial relations.

However, in 2013 there was a rift between the US and Saudi Arabia. In October 2013, Saudi intelligence chief, Prince Bandar bin Sultan suggested a distancing of Saudi Arabia –United States relations as a result of differences between the two countries over the Syrian civil war and diplomatic overtures between Iran and the Obama administration. The Saudis rejected a rotating seat on the UN Security Council that month (despite previously campaigning for such a seat), in protest of American policy over those issues.

Saudi Arabia was cautiously supportive of a Western-negotiated interim agreement with Iran over its nuclear program. President Obama called King Abdullah to brief him about the agreement, and the White House said the leaders agreed to “consult regularly” about the U.S.’s negotiations with Iran.

Another sour point in the US-Saudi relations was the murder of Jamal Khashoggi, a Saudi Arabian journalist, author, and columnist for Middle East Eye and The Washington Post. After weeks of denial, Saudi Arabia accepted that Khashoggi died at the Saudi consulate in Istanbul during a “fistfight.” Adel al-Jubeir described the journalist’s death as a “murder” and a “tremendous mistake.” But he denied the knowledge of whereabouts of the body. Following the case, the U.S. revoked the visas of Saudi nationals responsible for Khashoggi’s death.

But, in November 2018, relations between the United States and Saudi Arabia re-strengthened when Trump nominated John Abizaid, a retired U.S. army general who spoke Arabic as the U.S. ambassador to the country. Saudi Arabia also brought a fresh face on board, appointing their first female ambassador, Princess Reema bint Bandar Al Saud, to help restore relations in the wake of Khashoggi’s death.

In December 2018, the US ‘s Senate Committee on Foreign Relations approved a resolution to suspend the sales of weapons to Saudi Arabia over the Yemen conflict. The US lawmakers vowed to impose sanctions on Saudi Arabia over its low human rights profile. Senator Lindsey Graham said, “This sends a global message that just because you’re an ally of the United States, you can’t kill with impunity. The relationship with Saudi Arabia it seems is not working for America. It is more of a burden than an asset.” In April 2019, US Secretary of State, Mike Pompeo announced that 16 Saudi nationals involved in Khashoggi’s murder, including Mohammed bin Salman’s close aid Saud al-Qahtani, have been barred from entering the US.

THE US, SAUDI RELATIONSHIP RIGHT NOW.

The former president of the US, Donald Trump enjoyed a very warm relationship with the Saudi royals. In fact, Donald Trump and his son-in law, Jared Kushner are personal friends of the Saudi Crown Prince, Mohammad bin Salman. This close and personal ties must have informed the habitual practice of Donald Trump giving the Saudis the carte Blanche to do anything they so desire when he was in power.

Donald Trump placed so much priority on the economic relationship between the US and Saudi Arabia. Because of the economic benefits that accrues to the US from Saudi Arabia, the past president overlooked many of the wrong doings of the Middle Eastern country. The eloquent testimony of this fact is how the administration of President Donald Trump showed indulgence to the Saudi government over the murder of Jamal Khassohgi. Despite the global outcry that followed the murder, Donald Trump treated the issue with kid gloves. In response to the murder he said:” “The United States intends to remain a steadfast partner of Saudi Arabia to ensure the interests of our country, Israel and all other partners in the region,”

Donald Trump defied objections by the Congress when he went ahead to seal a multi-billion-dollar arms sale to Saudi Arabia. In defense of his action, he said:” “I know they’re [Senators] talking about different kinds of sanctions, but they’re [Saudi Arabia] spending $110 billion on military equipment and on things that create jobs, like jobs and others for this country. I don’t like the concept of stopping an investment of $110 billion into the United States.”

The Donald Trump’s administration imposed series of sanctions on Iran because of its attacks on Saudi Arabia oil plants. These sanctions were intended to choke off the last remaining sources of Tehran’s oil revenue. This action crippled the Iranian economy and caused untold hardship to Iranians.

The warm relationship that existed between the US and Saudi Arabia over the years have nosedived ever since Joe Biden succeeded Donald Trump as president. On assuming office, he promised to make Saudi Arabia a ‘pariah’ state over its poor human rights records and in particular the murder of Jamal Khassoghi. President Joe Biden believes the Saudi Crown Prince Mohammed bin Salman was to blame for the 2018 killing of the journalist Jamal Khashoggi.

The Biden’s ostracization of Mohammad bin Salman has not gone down well with Saudi Crown Prince. He has threatened to move Saudi Arabia closer to Russia and China for shunning him and the kingdom. However, President Joe Biden has since visited Saudi Arabia in a bid to stop the Kingdom’s shift towards Russia and China. The ongoing Ukraine war has put intense pressure on the global economy, most especially on the world energy markets. As a matter of economic necessity, the US has reached out to Saudi Arabia to increase its oil supply to calm the tension on the global energy markets.

THE BIDEN COCK UP

In what looks like a surprising turn of events, President Joe Biden visited Saudi Arabia to beg for an increase in crude production. This is expedient in the face of an imminent global economic recession. Even the US is not excluded from the current economic hardship that is biting hard in most countries of the world. Joe Biden ate the humble pie by visiting Saudi Arabia to beg for favours.

The Saudi Crown Prince, Muhammed bin Salman must have been elated by the Biden’s visit. It means that Saudi Arabia is ever more important and strategic to the foreign policy thinking of Washington, the rift between the two countries notwithstanding.

Saudi Arabia, is the second largest producer of crude oil in the world. This makes it powerful and important, most especially now in the wake of the energy crisis as a result of the Ukraine war. Amid the ongoing Russia-Ukraine war, many European countries are facing an energy crisis as oil and gas supply has been dwindling in the continent. Furthermore, the prices of crude oil and gas prices have been soaring across the world due to rising demand and low production.

It was embarrassing to watch a US president try to justify his Saudi visit. It will be just like paying Putin a visit in Crimea to walk back ‘he is a killer’ comment by Biden.  A powerful individual such as the US president should not make statements in haste, especially one that involves an ally. Walking back his words on making Saudi Arabia a pariah state should not have happened. He ought to be more diplomatic rather than emotional. If he had stated following the Khashoggi palaver that “the US will work with the Saudis to resolve the matter,” the wiggle room will thus be available to make overtures to the Saudis when the the need arises. A US president cannot go around making emotional statements and thus box himself in when the need arises to make difficult decisions.

WHAT SHOULD HAVE BEEN.

President Joe Biden falling on his sword and visiting the crown prince is an embarrassment to the USA. He vowed to make Saudi Arabia a ‘pariah’ state. He promised to distance himself from the Crown Prince and the kingdom of Saudi Arabia. Lo and behold, Joe Biden is now warming up to the country that he vowed not to associate with.

His visit has not yielded the desired results as the Saudi’s oil output increase has been inconsequential in the global energy markets, given the prevailing energy crisis is still biting.

Muhammed bin Salman could be wary and suspicious of the change of attitude of the US president to him and the kingdom. Many questions will be going on in his mind now. Among such, could be, what the US under Joe Biden desire as a payback for the killing of Khashoggi ?. Another of such questions could be, has the US under Joe Biden forgiven him for the murder of Khassoghi ? It is the way the events unfold in the future that will give answers to some of this question. As they say: Only time will tell”.

Maybe this is the right time for the US to open the tap and increase its oil production, rather than warm up to a dictator. The US should never compromise by sacrificing its esteemed values and ideals on the platter of global energy security.

The United State of America is the most powerful country in the world in terms of military and economic might. A lot of thoughts must go into policy making, one especially that will affect the whole world. Thus, to impose sanction on Russian crude and subsequently realize the dire consequence on the world economy begs the question: Why make such policy in the first instant? It becomes more incidental when a US president had to walk back his own words and bow to one he had previously labelled complicit in the killing of a US citizen.