The Transatlantic Slave Trade by Toyin Falola and Saheed Aderinto 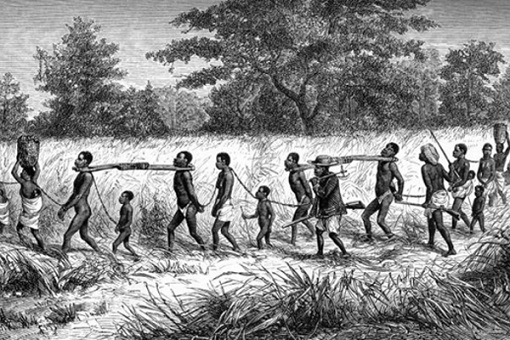 The Transatlantic Slave Trade began in the late 15th century in Nigeria. By 1471, Portuguese navigators hoping to tap the fabled Saharan gold trade had reconnoitered the West African coast as far as the Niger Delta, and traded European commodities for local crafts as well as slaves, the latter which turned out to be highly

The Transatlantic Slave Trade began in the late 15th century in Nigeria. By 1471, Portuguese navigators hoping to tap the fabled Saharan gold trade had reconnoitered the West African coast as far as the Niger Delta, and traded European commodities for local crafts as well as slaves, the latter which turned out to be highly lucrative.

In the early stages, Europeans captured Nigerians in raids on coastal communities, but as the demand grew they relied on slaves to be supplied by local rulers, traders, and the military aristocracy, providing these agents with rum, guns, horses, industrial products, and fine muslin cloth.

By 1490, more than 3,000 slaves a year were transported to Portugal and Spain from Africa. With the European expansion and colonization of the West Indies and America, what was a small market in ivory, gold, and slaves transformed into a massive, global trade. From the last third of the 16th century to the early 19th centuries, Portuguese, then Dutch, then French and English merchants greedily expanded the African slave trade internationally.

Enormous profits were made, mostly by Europeans, but a small number of Africans also benefited economically, mostly along the southwestern coast of Nigeria. Over this period of trade, more than 3.5 million slaves were shipped from Nigeria to North and South America and the Caribbean colonies. A smaller trade also existed to Europe and other regions.

The Transatlantic Slave Trade  and the role of local brokers

Competition among local tribes in the slave trade was intense and spurred internal wars to provide a steady stream of slave captives. Those groups that were implicated in supplying the most slaves (the Aro, Oyo and Hausa) also experienced internal crises and struggle, and Yoruba city-states ended up engaged in internecine wars for control of the slave trade.

In the north, the Islamic legal prohibition against enslaving Muslims led to rising conversion to Islam in order to avoid enslavement—though the economic incentives ensured that many Muslims were taken by Muslim raiders or predatory neighboring polities.

By the time slavery was abolished in the early 19th century and replaced by a lucrative palm oil trade, Northern Nigeria had become a highly stratified militarized society, and Lagos and other coastal cities in the southern Delta region had risen as important economic hubs with longstanding European contact, setting the stage for intensified polarization that would take place in the coming years.

Throughout Nigeria, traditional leadership structures (political and religious) had been shuffled and in some cases dismantled, leading to vulnerabilities and violence that left the country ripe for colonization.

Military might and the access to European goods now tended to determine who controlled various regions in West Africa, with the smaller ethnic communities in the Middle Belt often losing out to larger, more established groups—including those that had converted to Anglicanism in the South and the Sokoto Caliphate in the North—both of which were favored by Europeans.

The British outlawed the slave trade in 1807, a decision which was both cultural and economic in nature. The growth of evangelical Protestantism in the late 1700s lent a critical voice to discussions of slavery; missionaries understood that converting slaves to Christianity was incongruous with slaves’ treatment as chattel.

Missionaries also began working in Africa, and felt that the troubles with the “dark continent” were a direct result of slavery. Were slavery abolished, they believed that Christianity and civilization would spread. In 1772, Quakers pushed the British government to abolish slavery in Britain, and then to establish the colony of Sierra Leone, where former slaves were sent.

The second cause for abolition was the rise of the Industrial Revolution and the decline in plantation economies. Slaves were both industrial laborers as well as poor customers for British products. The British pushed the concept of “legitimate commerce” as a replacement for slavery, particularly the production of palm oil, which was sought after in Europe.

However, palm oil production encouraged domestic slavery to provide labor for palm plantations and to haul palm oil from the interior to merchants in the coast. And, slaves were still sent on ships leaving from cities along the coast.
The British began policing the coast, intercepting slave ships and releasing their prisoners.

Among these released slaves included Samuel Ajayi Crowther, who was raised in a CMS school and went on to become the first African Anglican Bishop. Ending the slave trade and developing alternative markets, as well as expanding markets for British goods, were the stepping stones to complete colonialism.