Ukraine War: As the African Union Chief goes to beg Putin for food. 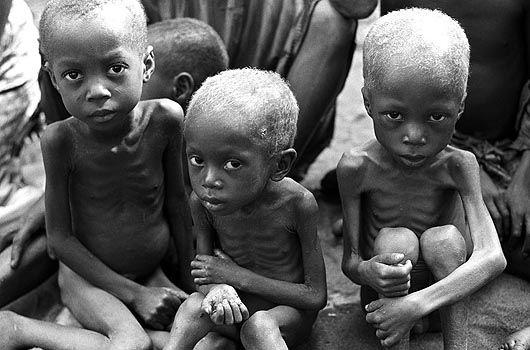 The ongoing Russian-Ukraine war has brought about some dire consequences in international political economy. The reverberating effects of the conflict has destabilized global food supply, especially in Africa. This has further exacerbated the poverty and hunger in the continent. Those who cannot feed themselves may probably starve. Africa thus top the list.  WHY IS THERE

The ongoing Russian-Ukraine war has brought about some dire consequences in international political economy. The reverberating effects of the conflict has destabilized global food supply, especially in Africa. This has further exacerbated the poverty and hunger in the continent. Those who cannot feed themselves may probably starve. Africa thus top the list.

WHY IS THERE A SHORTAGE OF WHEAT IN THE WORLD?

Before the war in Ukraine, climatic factors such as drought had already put immense pressure on the world’s food supply. Another factor that contributed to the problem is the Covid-19 pandemic. It has heavily disrupted crop production worldwide over the past two years. This has negatively affected food exports and the resultant effects of this is skyrocketing global food prices, increasing hunger and poverty in the world’s poorest countries. Countries in Asia, Middle East and Northern Africa rely heavily on food imports from Russia and Ukraine. Even, the rich and most developed countries are not immune from this food shortage as it is threatening to spike up food prices in the United States.

The war in Ukraine has only exacerbate a food crisis that has existed long ago. Russia and Ukraine are some of the top wheat producers in the world. The two warring countries are situated in a region known as Europe’s breadbasket. Russia and Ukraine produce 30% of the world’s wheat supply. Before the war Ukraine was regarded as the world’s bread basket. It was exporting 4.5 million tonnes of food per month.

Since the war began, about 20 million tons of grains are currently stuck in Ukraine. These stock are from the previous harvest. Furthermore, the Ukrainian government has banned the export of wheat and other food crops in order to be able to meet the needs of the domestic population. These has further added to the global food crisis. Moreover, about 20 to 25 million tonnes of wheat are currently stocked in Ukraine because of the Russian blockade of Black Sea ports and the Russian-Ukrainian mines along the coast.

THE SHAME OF AN AFRICAN TO GO AND BEG FOOD FROM A FOREIGN POWER.

On June 3, 2022, Macky Sall, Senegal’s President and Chairperson of the African Union (AU) met with the Russian President, Vladmir Putin in Sochi to discuss the global food shortages and grain supplies stuck in Ukrainian ports because of the unprecedented food crisis caused by the conflict. Many African countries unfortunately are vulnerable to even a slight disruption in the global food supply.

This action of the AU chief is embarrassing, humiliating and highly detestable. Leaders from other regions of the world are having talks with Vladmir Putin to end the war in Ukraine, even some are imposing sanctions on Russia. The only thing Africa can do is to go cup in hand to beg for food from Putin. It is a shame that with 30.37 million km² in land mass and a population of 1.216 billion (2016), the continent is not self-sufficient in food production.

The stereotype that Africans are monkeys is now enshrined. I beg anyone to prove me wrong.  How can Africa compete with the rest of the world when it is still grappling with lowest basic needs in the famous Abraham Maslow’s 5 levels of human need. The rest of the world are talking about space technologies, advance military technology, robotics and artificial intelligence, cloud computing, data mining, electric cars, alternative and renewable energy and bio-technology. While Africa and Africans can still not fathom how to convincingly feed themselves.

THAT AFRICAN CAN’T FEED THEMSELVES IN 2022 IS MIND BLOWING.

It is an irony that the continent of Africa with its abundant natural resources, fertile arable land, and a youthful population cannot produce enough food for its people. It is also a paradox that with all mineral deposits on the continent, is one of the poorest, backward and underdeveloped continents. In fact, poverty is the common heritage and shared destiny of most Africans. Everywhere you go on the continent, poverty stares at you in the face. Hunger, malnutrition, deprivation low quality of human life is widespread.

Bad and inept leaders, wars, corruption, tribalism, nepotism are some of the factors that have hampered the continent’s progress and development. The region is supposed to be one of the food baskets of the world. But overtime, the continent has turned to a basket case.

Aside a few Arab nations up North, and the input of the Afrikaners and British whites in South Africa, sub-Sahara Africans can’t feed itself. Most of the people on the continent are held up in the trap of hunger and poverty. African leaders have failed so far to fashion a way out of the quagmire.

HOW CAN AFRICA RAISE ITS PROFILE AS A CONTINENT?

Sustainable development has perennially eluded the continent of Africa, despite all the so-called development initiatives and efforts. Business-as -usual is no longer acceptable. A new dawn should set for the continent. It’s high time Africa transform its enormous potentials into the realities of wealth and prosperity. Africa has no business with hunger and poverty. It is capable of feeding its burgeoning population and even exports food to other parts of the world. It has the comparative advantage to achieve this feat.

What is needed is good governance, provision of social infrastructures, investment in education, provision of conducive business environment and human capacity development. With strategic planning, it is only a matter of time before Africa takes its rightful place.

Further more, African leaders’ policy makers need to look inward. What Africa needs is trade and not aid. The terms and conditions of world trade should become more favorable to Africa. Africa countries should pursue the economic policy of diversification, rather than depending only on natural resources as the mainstay of their economies. The volatility of the prices of mineral resources in world markets does not make a mono-product and mineral-based economy fashionable in this age and time. The continents need to invest more in other industries such as Information and Communication Technologies (ICT), Entertainment, Sports and Tourism.

Africans in the diaspora needs to do more for the continent. They should not limit their assistance to their financial remittances. Africa needs their skills, technical expertise and exposure. The brain drain should be reversed to brain gain. They should return home to set up businesses on the continent. No amount of foreign investment can do the magic. It is only Africans that build Africa by themselves.

A new generation of young Africans should wrest power for the old political establishment. The need for a new wave of charismatic, dynamic, visionary and selfless leader across the continent has never been timelier.

Africa is the next frontier. The continent must be independent and self-sufficient in food production, technology, finance and human capacity. As Africans, the future of the continent is collectively in our hands. Let’s join hands to make Africa a place we can be proud of.