Why Jerusalem has always been such a dangerous flashpoint 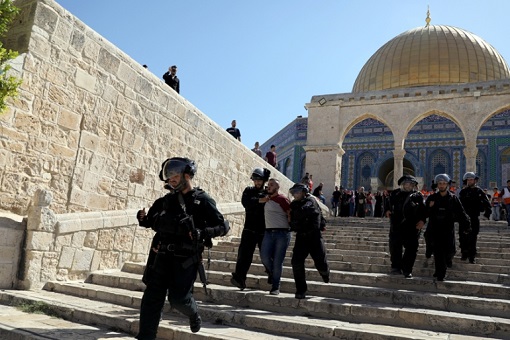 There are bulls in china shops and then there is Donald Trump. Charging in where every US President before him had feared to tread, he announced yesterday his recognition of Jerusalem as Israel’s capital. Why Jerusalem is considered a dangerous flashpoint. Israelis, naturally, were delighted; Palestinians appalled. In Gaza, Hamas pledged that the decision would

There are bulls in china shops and then there is Donald Trump. Charging in where every US President before him had feared to tread, he announced yesterday his recognition of Jerusalem as Israel’s capital.

Why Jerusalem is considered a dangerous flashpoint.

Israelis, naturally, were delighted; Palestinians appalled. In Gaza, Hamas pledged that the decision would “open the gates of hell”. The tone of fury was only to be expected.

There is a reason why ambassadors to Israel until now have all been based in Tel Aviv. Even the United States, the country’s closest ally, has always dreaded that moving its embassy to Jerusalem would be akin to sticking a hand into a Magimix.

For millennia now, Jerusalem has been holy in a way that no other place can rival. There is much more at stake in the struggle between Israelis and Palestinians to claim it as a capital than territorial acquisition. Many on both sides feel themselves locked in a contest to define the very nature and purposes of God.

In 1948, when the United Nations proposed the establishment of Israel, delegates were so intimidated by the aura of holiness that clung to Jerusalem that they shrunk from deciding on what its status should be.

Instead, they ruled that it should exist as a corpus separatum — a “distinct body”. Here, couched in the arid Latinity of international law, was the hint of a fabulously ancient notion: that Jerusalem was a place so exceptional, so unlike anywhere else in the world, that even to cross its limits was to enter a different dimension.

Originally it had belong to a people named the Jebusites. Then, so Jewish scripture records, it was conquered by a one-time shepherd boy named David from a small town called Bethlehem. After its conquest, an angel had appeared over the great rock which dominated the city, and shown him the precise spot where God wished his temple to be built.

David himself had been forbidden by God from embarking on the project but under his son Solomon, a king of such wealth and wisdom that his name would ever after serve as a byword for splendor, Jerusalem had become “the mountain of the house of the LORD”.

As token of this, there had been placed in the temple the greatest treasure that any people in the world possessed: a gilded chest, or “ark”, made to precise specifications laid down by God himself, and in which his presence was manifest on Earth. This, then, was the glory of Israel: that its temple was truly the house of the Lord God.

The Jews clung to this conviction despite two shattering disasters: first, the sacking of Jerusalem by the Babylonians in 586 BC, and then, in AD 70, the torching by the Romans of a second temple, built to replace the first. Rabbis, in the centuries that followed, came to identify the ruins with a concept to which they gave the name of “shekhinah”: the notion that God Himself might be present on Earth. The Temple Mount, they taught, and all of Jerusalem with it, was “the foundation-stone of the whole of the universe”.

It was there that Abraham had brought Isaac to be sacrificed; where Adam lay buried; and that “the world itself, moulded from its dust, had originally been founded”.

Reading into the future the patterns cast by such a past, the Jews maintained an invincible confidence, amid all their desolation, that Jerusalem would one day be theirs again. It was a confidence that finally, in 1948, would see the city declared the capital of the nascent state of Israel.

By making this proclamation, though, the Israelis were treading on the toes not only of Palestinians, but of Muslims everywhere. “Al-Quds”, Arabs called Jerusalem: “the Holy One”.

In the 7th century, when Arab armies seized control of the city from the Christians of Byzantium, they exulted in the holiness of their prize. In AD 689, work was begun on a great domed, octagonal building designed to proclaim to Jews and Christians that their faiths had been superseded. Enclosed within the exquisite symmetry of the Dome of the Rock was the very spot that rabbis had identified as the shekhinah.

The early Muslims too ascribed to it an awesome holiness. At the beginning of time, they believed, with the universe just completed, God had stood upon the rock and then ascended into heaven — leaving behind an imprint of His foot.

The end of time too would see the rock transfigured: for on the Day of Judgement all the faithful, and all the mosques across the world, and even the Ka’ba itself in Mecca, were destined to travel to Jerusalem, “so that the people will cry, ‘Hail to you, who come as pilgrims, and hail to her to whom the pilgrimage is made’.”

In due course this tradition — since it implied that God had a body — became an embarrassment to Muslims. Accordingly, in the 11th century an alternative explanation for the construction of the Dome of the Rock was enshrined: that it commemorated the ascension into heaven not of God but of Muhammad, who supposedly had been transported from Mecca specifically for the purpose.

Jerusalem, by means of this revisionism, was able to maintain its aura of holiness among Muslims. It maintains it to this very day. Like Mecca and Medina, it bears witness to the life and mission of Muhammad, the seal of prophets.

It is these rival traditions, entrenched over many centuries, that render Jerusalem the world’s most dangerous flashpoint. Like the border between North and South Korea, those who man their respective positions are locked in a tense and precarious stand-off.

Unlike Korea, though, Jerusalem has always lived in the shadow of apocalypse.

Tom Holland’s In the Shadow of the Sword: The Battle for Global Empire and the End of the Ancient World is published by Abacus