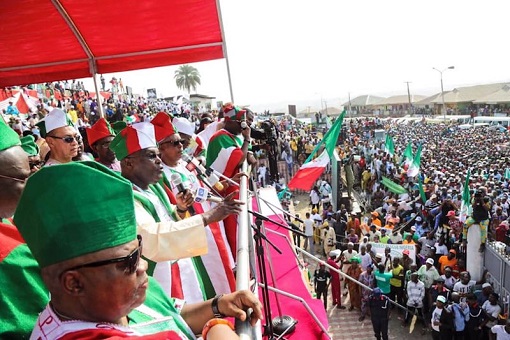 The People’s Democratic Party (PDP), has recommended that the 2023 presidential ticket should be thrown open for all interested aspirant in the country. This decision was made in Abuja during it meeting led by the Benue State governor, Samuel Ortom.

The governor of Benue State, Samuel Ortom, while speaking with journalist stated, “The good news for teaming supporters of the PDP and Nigerians is that we have resolved and every one of us-the 37 members, unanimously adopted the position that we are going to present to NEC.” He added.

However, it was noted that, “if the recommendation by the PDP,  to throw the presidential ticket open would be adopted by the National Executive Committee (NEC), then the aspirant from the six geopolitical zones could contest for any of the elective position”.

In regards to the new development, some aspirants have expressed great disappointment regarding the recommendation to throw the PDP presidential ticket open for all interested aspirants. Some of the aspirants expected the party to zone the presidential ticket to the south. This given the sense of fairness given the North will have served an eight year term when the incumbent President Buhari leaves power next year May.

A copy of the  recommendations by the zoning committee were as follows: (1) Zoning, as in our party’s constitution, is affirmed; (2) In spite of (1) above, ticket is thrown open, this time around due to exigency of time; (3) Our party is encouraged to always make the issue of zoning very clear at least six months before sales of forms; (4) Our party should commend the efforts of some of our contestants on the issue of consensus candidacy; the efforts should be seen to a peaceful and logical conclusion.

Where did I say the committee has thrown open the presidential ticket? The committee will present the report to NEC. It is NEC that has the final authority on the zoning of positions.

As far as the committee was concerned, there were arguments that the presidential ticket should go to the South. Some said it should go to the Northern part of the country. There were others who were of the opinion that it should be thrown open to allow the best candidate who will be able to deliver good governance and make Nigerians feel like human beings again”.