A new Nigeria is in the making — Yemi Osinbajo. 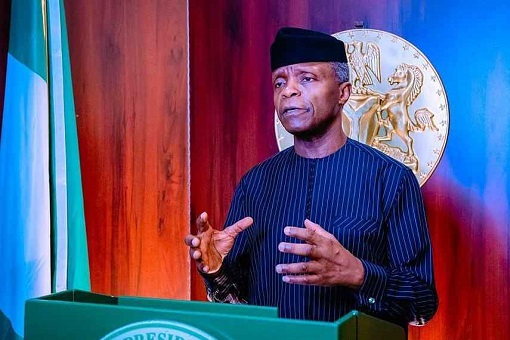 Despite Nigeria currently battling with insecurities and other challenges, Professor Yemi Osinbajo insists Nigeria is in the process of change. He stated this at the interdenominational Church Service to mark the Armed Forces Remembrance Day at the National Christian Centre, Abuja. According to him, “It is the struggle to realize the worth of our national

Despite Nigeria currently battling with insecurities and other challenges, Professor Yemi Osinbajo insists Nigeria is in the process of change. He stated this at the interdenominational Church Service to mark the Armed Forces Remembrance Day at the National Christian Centre, Abuja.

According to him, “It is the struggle to realize the worth of our national anthem and make Nigeria a land where peace and justice reign. “The nation we are fighting for is in the process of being reborn and every victory that our armed forces record, through their immense courage, serves to bring the new Nigeria.

As we celebrate our fallen compatriots and our veterans today (Sunday), we must recognize that the burden of their vocation is not borne by them alone. There is a sense in which soldiers enlist along with their families. The families of the fallen heroes bear an extraordinary burden: the loneliness of husbands and wives violently deprived of their spouses, the trauma of children who will grow up without the warmth of the parent’s love, and those who raised their children alone as single parents.

Even the veterans that return do so with physical and psychological scars, often with injuries, not only to their bodies but to their minds. From the Civil War to our current struggle against terrorists, and insurgents, the durability of our reunion has been made possible, in large part, by dedication to duty of men and women of our armed forces often at a great cost to themselves.

The real question is whether we, as a people, are worthy of their sacrifices. The only way to truly repay their sacrifice and service is to commit ourselves to the reason for which they have given their lives. It is for the rest of us to live and conduct ourselves with the highest values as a people and ensure that we all become addicts of peace and justice.

Our commitment as an administration is to ensure that the families that shoulder such burdens will not do so alone. The welfare, benefits, and entitlement of members of our armed forces and their families will remain a priority for us,” He pledges.

“The Nigerian Army traces its history to Lieutenant John Hawley Glover’s Constabulary Force, which was largely composed of freed Hausa slaves in 1863. The Constabulary Force was established with the primary goal of protecting the Royal Niger Company and its assets from constant military incursions by the neighboring Ashanti Empire. This policing force would slowly grow in size and capability to meet the needs of the British Empire in its West African territories, and would later form the nucleus of both the Gold Coast and the Hausa Constabulary, both of which would become the Ghana Regiment and Southern Nigeria Regiment respectively by 1879. These regiments would be incorporated into the Royal West African Frontier Force (RWAFF) in 1900 by the British Colonial Office, following British military experiences in the Benin Expedition of 1897, as well as wider British efforts of a complete reorganization of its African colonial units such as that of the Egyptian Army earlier in the year. During the Second World War, British-trained Nigerian troops saw action with the 1st (West Africa) Infantry Brigade, the 81st and the 82nd (West Africa) Divisions which fought in the East African Campaign (World War II) and in the Far East”. This section is culled from WIKIPEDIA.