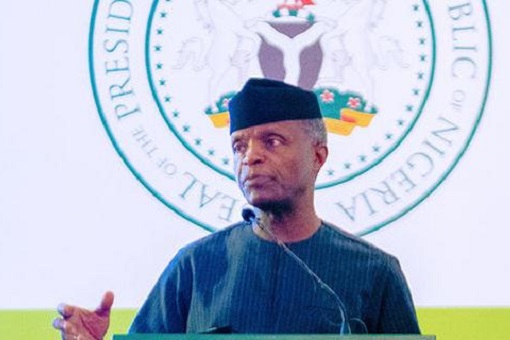 Akwa Ibom Coalition for Professor Yemi Osinbajo 2023 has urged  Vice President Yemi Osinbajo to contest for the  Presidential  election coming up 2023, stating they won’t relent in their call out until the VP declear his ambition. The group delineated the Vice President as a man with the ability to turn Nigeria to a better

Akwa Ibom Coalition for Professor Yemi Osinbajo 2023 has urged  Vice President Yemi Osinbajo to contest for the  Presidential  election coming up 2023, stating they won’t relent in their call out until the VP declear his ambition.

Will Yemi Osinbajo run for president?

Edidiong Idiong, state Coordinator of the group, while addressing supporters after a road walk in support of the VP at the Ibom Unity Park stated that,” Nigeria deserves the best at the moment.”

According to him, “We are here gathered today to create awareness and sensitize our people and call on the Vice President, Professor Yemi Osinbajo, to throw his hat into the ring and contest for the office of the president in 2023.

“Osinbajo is the man with the Midas touch; he has the capacity, very articulate, he appeals to all demographic groups, and I don’t see anybody who has the kind of experience that he had.” He added.

Eno Inyang, a woman leader stated, the women were also rooting for Osinbajo because he has the interest of women at heart “as seen through the provision of soft loans to traders,” stating that she believed if the vice president eventually becomes the President, the women would enjoy.

Though the Vice President is yet to officially declare his interest, Edidiong Idiong stated that the rally was a way of encouraging him to contest the election by creating awareness and sending the message to the Vice President.

However, Nigeria needs a President who would create massive employment for the youth, as it would help reduce the rate of ritualism, kidnapping, killing and the so called “yahoo yahoo” in the country, and also to tackle insecurity, to create a stable economy for an average Nigerian to live comfortably, and most importantly to give quality education to young Nigerians.

“On 31 March 2015 Buhari was confirmed by the Independent National Electoral Commission (INEC) as the winner of the presidential elections. Thus, Osinbajo became the Vice President-elect of Nigeria. They were both sworn in on 29 May 2015. On 17 August 2017 VP Yemi Osibanjo described hate speech as a species of terrorism.

Yemi Osinbajo assumed office after taking the oath of office on 29 May 2015 at the Eagle Square, Abuja. As the Vice President of the Federal Republic of Nigeria, he is expected to oversee the economic planning team and report as well as make recommendations to the president who takes the final decision. Because of his legal background and antecedents as a commissioner for justice in Lagos state for eight years, many expect that he will contribute a great deal to the much-needed reform of the judicial system at the national level.

Acting President, President Muhammadu Buhari wrote a written declaration on 9 May 2017 to the president of the senate and house of representatives on his decision to embark on a medical trip; the letter was read that day at a plenary assembly of both the senate and the house of representatives. The acting presidency was conferred upon Vice president Osinbajo during President Buhari’s medical leave.

Indian Vice President Mohammad Hamid Ansari calling on the President of Nigeria Muhammadu Buhari at the State House, in Abuja, Nigeria, on 27 September 2016. Vice President Yemi Osinbajo is seen to the right.

On 7 August 2018, Osinbajo fired the State Security Service boss, Lawal Daura for illegal invasion of National Assembly by armed and masked operatives of the department. Daura has been replaced with Matthew Seiyefa.

Osinbajo with US Secretary of State Antony Blinken in 2021

In January 2019, Osinbajo criticized the fact that social media is currently “under multi-jurisdictional regulation”. He called for more collaboration among nations to reach a convention to regulate social media and counter hate speech.

On February 2, 2019, Osinbajo’s helicopter crashed in Kabba, Kogi State. He survived, and delivered a previously-scheduled campaign speech after the crash. In the speech, he said he was “extremely grateful to the Lord for preserving our lives from the incident that just happened. Every one of us is safe and no one is maimed.”

Tenure On 29 May 2019, Professor Yemi Osinbajo took his oath of office to begin his second term at Eagle Square in the capital of Abuja”. This section is culled from WIKIPEDIA. https://en.wikipedia.org/wiki/Yemi_Osinbajo