African Pastors: Living the Higher Life in the Midst of Poverty 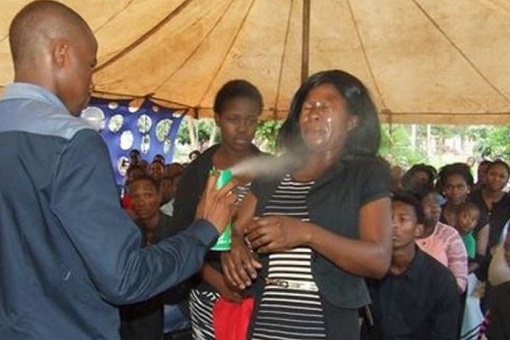 The issue of wealth and people’s response to it has created a clear divide in the body of Christ. While some preachers believe that God’s ultimate plan for His children is to prosper in this world and live eternally with Him in heaven quoting ‘I wish above all things that thou prosper …’ Others disagree

The issue of wealth and people’s response to it has created a clear divide in the body of Christ. While some preachers believe that God’s ultimate plan for His children is to prosper in this world and live eternally with Him in heaven quoting ‘I wish above all things that thou prosper …’ Others disagree and claim true followers of God should not focus on amassing the material possessions of this world especially when others around them suffer.

Although Africa is home to some of the poorest and most religious countries in the world, it may seem a bit contradictory to note that she is home to the richest pastors in the world. According to naija.com, a Nigerian blog, five African pastors were listed among the wealthiest men of God in the world alongside Bishop TD Jakes, William Graham, Creflo Dollar and a host of them. From Nigeria, Bishop Oyedepo sits at the second position with a net worth of $150 million and other private properties.

Pastor E.A Adeboye  was also listed in an African magazine, NEWSWEEK, as the most powerful man in Africa and one of the top 50 global power elites in 2008/2009, among others such as President Barack Obama and Nicolas Sarkozy.

Forbes evaluation was recently released to indicate that the richest pastors in Africa are from Nigeria with Bishop Oyedepo at First position having a net worth of  $150 million while Chris Oyakilome is worth $50 million , T.B Joshua sits in third position with $15 million while Chris Okotie and Matthew Asimilowo stands at $10 each.

It has been revealed that some of these pastors have private investments in form of privately owned universities, houses, schools and businesses which helps to finance their first class lifestyle. However, a majority are believed to live on church funds gotten from the pocket of members.

FEEDING OR FLEECING THE FLOCK

It is commonplace in Africa for pastors to own mega churches, fleet of cars, private jets and properties all over the world while a majority of their members can barely feed on a daily basis.

Criticism levelled from different quarters all leverage on the vulnerability and gullibility of church goers who use their hard-earned money to enrich their pastors, even at their detriment. In an article, poor blacks’ rich pastors, Seth Dunn elaborated on the plight of the average black church goer. He stated sadly that the wealthiest pastors in the world are blacks pastoring black poor people.

‘It is not uncommon for pastors in majority black churches to have perks such as automobile and clothing allowances. In fact, it is sometimes necessary for black pastors to have such allowance.

Many black congregations expect their preachers to appear exceedingly prosperous. After all, who is going to take seriously a sermon about God’s material blessings given by a man with no gold watch, no fine suit, and no Cadillac? Absolutely no one.’
It is argued that Africans are too gullible and would turn to anything that appeals to them.

While this argument is unsubstantial, most African church goers engage in different financial church commitments in form of ‘seed sowing’ which in turn often times goes to the pocket of their pastors.

Africa has mega churches with magnificent structures sited in the midst of abject poverty. These structures are often projects sponsored by the church members. Often times, a 1km walk from the church premises may leave one in utter dismay as to how much poverty is lurking around. These churches exude so much wealth while the reality of the professed ‘kingdom riches’ is hardly experiential in the life of the average church goer.

According to Alllafrica, Malawian, South Africa-based Pastor Hastings Salanje said pastors need to be rich because the congregation have to pay them for pouring unto them blessings they seek from God. “You see, we men of God are rich just because people pay us for giving them blessings” Salanje told Capital Radio in the Straight Talk.

The pastor’s son who goes by the name Iam Salanje posted a picture of his father’s luxurious cars on a convoy. He wrote “My dad’s convoy, I swear you would think he is a president” ‪#‎livinglife‪#‎richpastorsofSA ‪#‎salanjeanointing ‪#‎presidential “

Critics seem to be in dismay stating firmly that the tenets of Christ whom they serve preach modesty and self-denial. They call it a case of fleecing the flock instead of feeding them on the part of the ‘prosperity preachers’.

A Forbes contributor Mfonobong Nsehe summarized it when he stated that
“Pastors are no longer solely interested in getting people to Heaven; they’ve devised intelligent ways to make good money while reaching out to souls.”

SHOULD ACCOUNTABILITY BE DEMANDED?
While most non-governmental and religious bodies are accountable to their members or boards of directors, most churches in Africa are privately owned.

This automatically narrows down the chances of accountability & efficiency of accountability on the part of pastors. Most of them do not publish financial reports and earnings of their churches at the end of each year neither are they required to do so by their members.

Some say Africans have become so subservient because they are often reprimanded saying ‘judge not…’ but again it is instructive to note that apostle Paul in one of his many letters  called on believers to be the first to judge themselves.

Some even believe that asking too many questions condemns them to hell, hence, they refuse to demand accountability even if they have substantial evidence that their church leaders are living flamboyant lifestyles off them. They are made to believe that pastors are accountable to no one else but God.

IT WASNT … FROM THE BEGINNING
A cross reference through the bible reveals the simplicity and modesty with which the early followers of Christ lived. In one of the books of the bible, a rich man was admonished by Christ to sell his property and distribute it to the poor; this left the rich man sorrowing seeing he had great wealth.

The early church preached communal living where everyone had a common purse and everything was distributed according to need such that no one lacked for nothing. This however does not eliminate the fact that there were rich and poor people in the early church, the general principle was for everyone to share what he has in such a way that no one is lacking.

THE ISSUE AT STAKE
The issue of uneven wealth distribution is not like biological differences which one can do little or nothing about. According to Seth Dunn the Christian faith is a call to service.

It is commonly argued among critics that if African pastors unite to use their wealth to enrich Africa, this could serve as a major means of transformation. There is so much financial  resource in the hands of a few. This has made people call the faith an adulterated form of capitalism.
It is noteworthy to state that although most of these pastors carry out philanthropic “gestures”.