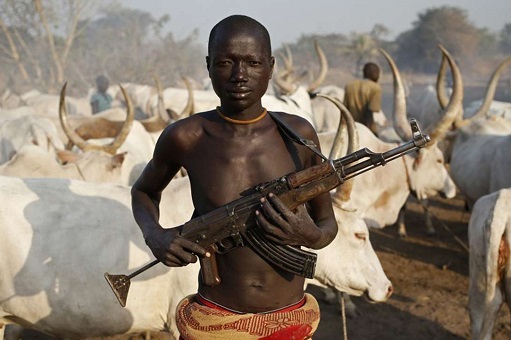 Spate of killings by Fulani herdsmen have been taking place in Yoruba land and in other parts of the country for sometimes now. However, the massacre that took place at the St. Francis Catholic Church in Owo, is not only worrisome, but it is highly condemnable.  HISTORY OF HERDSMEN IN NIGERIA. The Fulani are predominantly

Spate of killings by Fulani herdsmen have been taking place in Yoruba land and in other parts of the country for sometimes now. However, the massacre that took place at the St. Francis Catholic Church in Owo, is not only worrisome, but it is highly condemnable.

HISTORY OF HERDSMEN IN NIGERIA.

The Fulani are predominantly Muslim people that can be found in many parts of Africa, especially in West Africa from Lake Chad in the east to the Atlantic coast. They are mainly found in Nigeria, Senegal, Mali, Guinea and Niger. They can also be found in several other countries. The language of the Fulani people, known as Fula is categorized within the Atlantic branch of the Niger-Congo language family.

The history of the Fulanis in Nigeria can be traced to the military exploits and conquest of Usman Dan Fodio in the Fulani war or Jihad of 1804-1808. Usman Dan Fodio, an Islamic scholar and teacher assembled an Islamic army to lead a jihad against the Hausa Kingdoms of north Nigeria. The conquest of Gobir in 1808 gradually spread to other Hausa kingdoms. The fall-out of the war is the creation of the Sokoto Caliphate, headed by Usman Dan Fodio. The Caliphate appointed some of the veterans of the Fulani wars as Emirs to govern the various states of the empire. The Sokoto Caliphate became one of the largest states in Africa in the 19th century.

Over the years, the Fulani’s have gradually cornered the leadership positions and administrative structures in norther Nigeria. They have relegated the Hausas and all the other ethnic groups in that part of the country. Almost all the Emirs in the north are from the Fulani extractions.

Most of the prominent men in the north are Fulani’s. Sir Ahmadu Bello, one of the founding father of modern Nigeria, and the first premier of the Northern Nigeria region from 1954 to 1966 was a Fulani man. In fact, he was a direct descendant of the founder of the Sokoto Caliphate. His great-grandfather was Sultan Bello, the son of Usman Dan Fodio. Most of the Governors, Federal Ministers, Service Chiefs, Heads of Government Agencies, Departments and Parastatals from the north are Fulani. The late President Umar Yar Adua was a Fulani man. The incumbent President, Muhammadu Buhari is also Fulani. One of the top contenders to become president in 2023, Alhaji Atiku Abubakar is Fulani as well. The list goes on and on.

Ilorin, a Yoruba town was founded by Laderin, the great-grandfather of Afonja, the Aare Ona Kakanfo (Generalissimo) to the Alaafin of the old Oyo empire. Afonja used Ilorin as his military outpost. Alimi, a Fulani Islamic cleric, through his nomadic wanderings arrived Ilorin and was hosted by Afonja. When a rift broke out between Alaafin and Afonja. Out of regard for Alimi’s spiritual and military power, Afonja sought his support in the defeat of the Alaafin. Gradually, thereafter, the Fulanis entrenched their influence and dominance of Ilorin. In 1831, Abdusalami, the eldest son of Alimi became the ruler of Ilorin.

The south west lately has its own share of the criminalities of the Fulani herdsmen in recent years. From Iganaga to Ibarapa and now in Owo, Yoruba land have been at the receiving end of the inglorious and nefarious activities of the Fulani herdsmen. There had been killings, maiming, rape and kidnapping-for-ransom. In fact, the formation of Operation Amotekun, Western Nigeria Security Network in 2020 is a direct response to the new spate of insecurities in the region.

The unprecedented influx of Northerners into Yoruba land in recent times does not augur well for the security profile of the region.  This influx needs be checked as it poses a serious security threat. The Governors of South West states, traditional rulers, community leaders and all residents should join hands to checkmate this unfolding scenario.

The ugly incident at the St. Francis Catholic Church in Owo could have some political undertone. Owo is the home town and the actual location is the local government area of Governor Rotimi Akeredolu. The Governor of Ondo State has been at the fore front of campaign against the policy of open grazing. He was instrumental to the formation of Operation Amotekun. He was also vocal in the clamor for a Southerner to succeed President Muhammadu Buhari in 2023. His he paying for all these?

Could the attack be a way to scare voters from turning up at the election venues in the coming polls? If this is so, then it is highly unpatriotic and undemocratic.

Or could it be the beginning of the rumored intended capture of Yoruba land by the Jihadists? If this is so, then it is barbaric and unacceptable in this modern era.

Some observers have alluded to the ban of okada riders in Lagos and the possibility this could spark series of violence in Lagos and elsewhere. The abokis could be easily brainwashed and manipulated into unleashing mayhem in the nation’s commercial capital. The fights are already in full gear … Idi Araba, Mushin, Ojo Alaba, Iyana Iba and its environs are witnessing a stand off between aboki okada riders and the police. There is a simmering vortex of “vawulence”—as they say in the local parlance — waiting to boil over.

The South should go beyond the Operation Amotekun and float a full-fledged State Police in Ondo State, Ekiti State, Oyo State, Osun States, Ogun States and Lagos State. In achieving this, the South-west should not be deterred by any opposition from the government at the centre. The Federal Government have displayed gross incompetence in the protection of lives and properties. Therefore, the Governors of the South-West States should not leave the security of the region into the hands of the Federal Police and under-funded and under-staffed Nigeria Police Force.

The uncontrolled influx of Northerners into the South-West should be stopped. New legislation should be passed by the State House of Assemblies to check the wave of immigration. Undocumented foreigners should be arrested and deported.

The Western Nigeria Security Network, Operation Amotekun should be better funded and equipped to focus on tackling kidnapping and terrorism. Intelligence gathering and proactive policing should be the core of the modus operandi of Operation Amotekun.

State- of-the-art equipment used in modern day policing in more advanced societies should be procured and utilized by the operative of Operation Amotekun, instead of relying only on Yoruba mystical powers.

Yoruba land is daily being encircled by killer herdsmen and foreign mercenaries from up yonder. We Yorubas should forget about one Nigeria and protect ourselves from these marauders from the North. The time to act is now, before we become a vassal of the Fulanis.

A replay of the Afonja-Alimi saga should not be allowed in any part of Yoruba land. Let all Yorubas both at home and in the diaspora join hands to protect their land, culture and common heritage.