US and Russia resume talks over Ukraine tension. 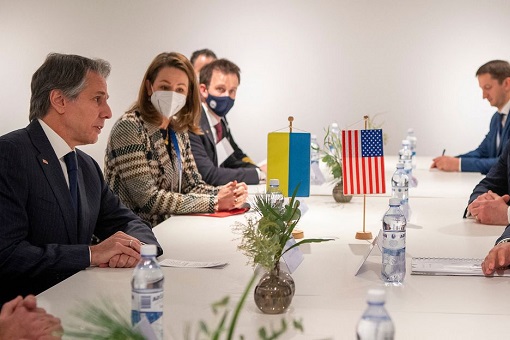 Concerning the issue with the US and Russia to ease tension over Ukraine, a meeting has been held in Geneva to discuss the best possible way to limit military exercises and missile deployment. The US has rejected the Kremlin’s demands that Ukraine never merges with Nato in any way. US set to resume talks with

Concerning the issue with the US and Russia to ease tension over Ukraine, a meeting has been held in Geneva to discuss the best possible way to limit military exercises and missile deployment. The US has rejected the Kremlin’s demands that Ukraine never merges with Nato in any way.

US set to resume talks with Russia over Ukraine tension.

According to the deputy US secretary of state leading delegation, Wendy Sherman, she said she told Russia that it was a “nonstarter” adding: “We were firm in pushing back on security proposals that are simply non-starters for the United States. We will not allow anyone to slam close Nato’s open door policy. “Ukraine gets to decide its foreign policy orientation. It gets to decide its future. Nato gets to decide the process for Nato membership and how one goes through that process.”

The US deputy undersecretary warned that Russia will face “unprecedented sanctions” in response to an invasion of Ukraine. “If Russia walks away from the diplomatic path, it may well be quite apparent that they were never serious about pursuing diplomacy,” she said.

The Russian deputy foreign minister, Sergei Rybakov, leading the Kremlin team, had declared before the meeting, “for us, it’s absolutely mandatory to make sure that Ukraine never, never ever becomes a member of Nato. We cannot step back from… something that is absolutely necessary to us is categorically unacceptable to the Americans”.

Mr. Rybakov, also complained about “certain threats, “If this doesn’t happen… we very much don’t want to have a situation where Nato countries led by the US make that kind of mistake and once again act to undermine their own security and the security of the whole European continent.”

Speaking about the discussion and the way forward, Mrs. Sherman said “We had useful discussions and exchanges today that will help inform our way forward”.

However, we hope an agreement will be reached in the next meeting holding today (Wednesday 12th of January 2021) in Brussels, between the Russian and Nato officials including the OSCE (Organization for Security and Cooperation in Europe).

“Russian Federation is a country spanning Eastern Europe and Northern Asia. It is the largest country in the world, covering over 17,125,191 square kilometers and encompassing one-eighth of Earth’s inhabitable landmass. Russia extends across eleven time zones, and has the most borders of any country in the world, with sixteen sovereign nations.

The name Russia is derived from Rus’, a medieval state populated primarily by the East Slavs. However, the proper name became more prominent in later history, and the country typically was called by its inhabitants “Rus’ land”. In order to distinguish this state from other states derived from it, it is denoted as Kievan Rus’ by modern historiography.

The name Rus’ itself comes from the early medieval Rus’ people, a group of Norse merchants and warriors who relocated from across the Baltic Sea and founded a state centered on Novgorod that later became Kievan Rus”. This section is culled from WIKIPEDIA.