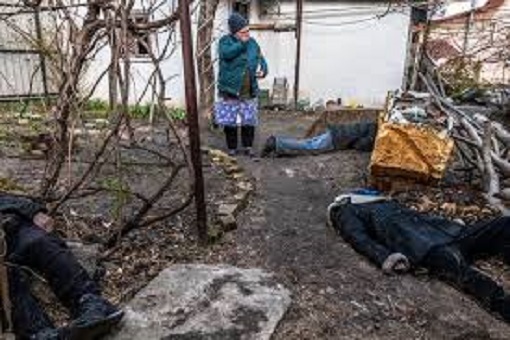 The ongoing military operations in Ukraine have continued without pause. This has resulted in an undisclosed number of dead civilians in  Bucha, a city in Ukraine’s Kyiv Oblast. This new development has resulted in western leaders setting up a meeting to discuss further sanctions against Russia. Do civilian killings in Bucha constitute war crimes? The

The ongoing military operations in Ukraine have continued without pause. This has resulted in an undisclosed number of dead civilians in  Bucha, a city in Ukraine’s Kyiv Oblast. This new development has resulted in western leaders setting up a meeting to discuss further sanctions against Russia.

The disturbing images of unarmed civilians killed by the Russia Military Operations will make one wonder if Russia did not really commit war crimes in Ukraine. However, Maria Varaki, lecturer in international law have noted that evidences have to be fully confirmed and double-checked before war crimes can be constituted against Russia.

Ukraine President Volodymyr Zelenskyy has described the recent killing in Bucha as a genocide. The president stated this during the UN Security Council meeting (Tuesday 5th of April 2022). He insisted that the unprovoked military operations in Ukraine should be discussed at length. The president also noted that, “The Kremlin-ordered attack on his country amounted to genocide, after local officials reported scores of civilians had been killed in the towns of Bucha, Irpin and Hostomel near the capital”.

However, the Russia President Vladimir Putin has debunked the allegations leveled against him in regards to the killings of unarmed civilians in Bucha. He noted that the casualties in the town of Bucha were as a result of blatant provocations by Ukrainian radicals.

The UN High Commissioner for Human Rights, Michelle Bachelet, however expressed great concern over the disturbing images of unarmed civilians killed in Bucha by the Russian military operations. She noted that the massacre in Ukraine demands the application of international humanitarian law as it constitutes serious violations of international human rights law.

In regards to the recent killing in Bucha, US secretary of state, Antony Blinken, has described the killing as “a punch to the gut”, he said he will join the western allies to document  all atrocities committed by the Russian military operation.

António Guterres, UN secretary general, too noted: “I am deeply shocked by the images of civilians killed in Bucha, Ukraine. It is essential that an independent investigation leads to effective accountability” he concluded. German chancellor, Olaf Scholz, couldn’t hide his disgust as he expressed shock over the recent incident(s) that have taken place in Bucha. In a recent press interview, he stated, “Streets littered with bodies. Bodies buried in makeshift conditions … There is talk of women, children and the elderly among the victims,” he emphasised.

In conclusion, it must be noted that the Western intelligence officials, the Ukrainian authorities and the human rights organization Amnesty International, have swung into action, stating that potential evidence have been documented since the beginning of the invasion. It is desired the western leaders will sort for possible ways to keep civilian’s safe during this war.