Case For The Break Up Of Nigeria Into Manageable Units 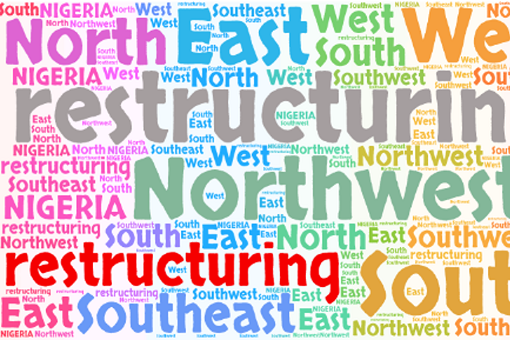 Yes I do believe that better governance,  more productivity, a committed, hardworking  and more patriotic citizenry will be very difficult to achieve with the current over- sized Nigeria- both in terms of population and geographical size. The break up for Nigeria into manageable units. And No I do not want the country broken into two-

Yes I do believe that better governance,  more productivity, a committed, hardworking  and more patriotic citizenry will be very difficult to achieve with the current over- sized Nigeria- both in terms of population and geographical size.

The break up for Nigeria into manageable units.

And No I do not want the country broken into two- North and South as some have been clamouring; and not even along the three pre-independent regional divisions of North, East and West to form three countries, as I feel division along these lines will exacerbate the problems of the minority tribes the more than is currently the case with 3-4 large tribes subsisting to check mate each other in the current nation of Nigeria!

Before I come to my reasons or rationale for advocating for the break-up of Nigeria into smaller units, let me recommend that breaking Nigeria, peacefully, into Six countries, along the six geographical zones recommended by the  1996 constitutional conference will be the ideal thing to do. And now my reasons for the recommendation:

1.       Nigeria, as is currently managed and with the type of technological and managerial personnel available to it, is just incapable of managing a huge geographical size of about 924,000 Square Kilometers and a massive population “estimated” to be 150 million people.

Note the word “estimated” as Nigeria, in its current form cannot even reliably count its population without all the acrimonies and disputes from all shades of opinion, ranging from political, ethnic to religious groups because population have been, and continue to be used as a tool for deciding how many local government a state gets; how many House of representative members go to Abuja to share oil money to themselves and their cronies; and more importantly how much each state and local government gets into its “begging bowl” in the monthly oil monies sharing in Abuja, in the name of Federal allocation.

Nigeria may not be the biggest to be managed as a country in the whole world but the challenges of properly running such a massive country with the dearth of technological and managerial capacity is proving overwhelming.

2.       Corruption and indiscipline, the real bane of Nigeria’s underdevelopment and stunted growth will persist with the size of the country, especially with the claim of entitlement to oil monies without any need for competition and productivity by subsisting states.

How on earth do you think that one EFCC, a single central bank and Police force will be able to monitor and regulate financial crimes and criminals across a large country as Nigeria? One EFCC chasing thieves and financial criminals across 36 states and the Federal  capital territory and then 774 local government chairmen and thousand more councilors who are busy feasting on monthly allocations at the expense of long suffering poor, helpless and hapless Nigerian masses in the nooks and crannies of the country.

Because the sheer weight of chasing too many thieves has overwhelmed the EFCC, even if it has the best intentions, they can only limit themselves to the big thieves in the banks, state and national public treasury looters. Local government chairmen theft, in millions of Naira, are considered as “Petty cash” and not worthy of been chased with the little resources that EFCC has.

So they must prioritize to be able to even seem to be doing anything by on-lookers. Same applies to one Central bank overseeing the whole banking in Nigeria or one Federal Inland Revenue service trying to assess and collect taxes across such a huge area. The result is a poor regulation and governance across the board leading to inefficient and ineffective economy.

3.       With such a huge population, all dependent on a mono-culture economy, there will always be unemployment, lack of innovation and creative thinkers and low productivity, if any production is even going on.

Everyone is waiting for monthly allocations where state governors go to Abuja to share oil money and no one is thinking of productivity and generating employment for the massive population of unemployed youths, many university graduates, without a hope of gainful employment some 5 years after graduation and counting.

Some may argue that the problem is bad leadership and lack of appropriate technology, governance and effective regulation, and whilst I agree with these claims I do think with the level of Management and technological capacity available in the country, the best leadership will still struggle with such a huge landmass and population.

Forget about claims that Nigeria has enormous material and human resources: Material resources may be, and this has fueled the looting and lack of creative leadership, but Human resources, I would say No.

Where is the technology?  Just go to South Africa, Brazil or even Mexico and see the technological capacity available and how these have been utilized to improve their infrastructure and transform socio-economic activities, never mind the advanced countries of Europe and America, and you will know that Nigeria really has nothing to show in technological abilities in comparative terms. Can we produce even a pin in that country? This is 2010 and Nigeria still cannot produce a fully “MADE IN NIGERIA CAR,” that is if they can even produce a Wheel of a bicycle!

4.       If Nigeria could be turned into six countries, which the united nations should readily accept and recognize considering that these nations will still top a population of about 25-30 million people, each nation or country will find a way to survive rather than the current deceit and laziness going on among the regions and states.

Governors and potential governors, ambitious politicians no longer think of how they will generate and manage state revenue to cater for the needs of their people, because they believe there is oil money to be shared every month. Why worry thinking of Budgets and financial planning? Just get the commissioner of Finance to Abuja and bring the monthly allocation and we can start spending and stealing with impunity!

5.       And definitely employment in various forms will be generated and resources, including labour, will be better applied: think of six football countries instead of the current only one, Nigeria, competing for positions in the World cup, more athletes from six countries at the Olympics; more volley ball and Basket ball teams, and some like a country in the Niger Delta may even produce swimmers and canoeist for Olympics unlike now where, despite living in rivers, we do not have swimmers or canoeist at the Olympic stands.

Laziness and unemployment is been encouraged by the sheer size of the population accompanied by irresponsible and clueless leadership. I believe that much more jobs will be created in all spheres of endeavor if we have six countries in place of the current just one called Nigeria.

6.       Election rigging and the imposition of leadership will reduce, if not abate completely. This is because a leaner territory will be more amenable to control and the people will feel more sense of belonging and ownership and therefore ask for transparent and accountable leadership.

7.       AS currently is Nigeria suffers from a dismal image problems across the globe. We are looked upon as a country managed by incompetent and very corrupt idiots in all areas of leadership positions forcing the vast majority of Nigerians to either die of poverty or resort to one form of crime or another to survive.

No amount of Dora Akunyili’s rebranding will remove this tar brush from the minds of outsiders, and it even now appears like aunty Dora has given up on the “rebranding Nigeria” scheme! A couple of weeks back I was at the Nigerian High Commission in London, forced to renew my passport by the demi-gods in power in Abuja, when my current passport still subsists till 2012.

That itself is poor judgement, or if you like very bad policy decision by the ministry of internal affairs, calculated to inflict unnecessary pain or long-suffering Nigerians who are always put at the wrong end of the stick by clueless, incompetent and greedy people in government at all levels.

Now after surviving a long queue outside the building, in the wintry rain of London, we entered two more queues inside the building with many non-Nigerians who have come to get a visiting visa. In frustration I heard a white man who came for visa complaining to his pal on the phone that it may take a whole day to get a visa because of the crowd waiting and incompetent Nigerian staff.

I did not agree with him that the staff were incompetent; despite my frustration that day I could see some hardworking staff operating from very difficult circumstances occasioned by a huge population overwhelming resources- both building and staff. Note that the Northumberland building has been in use since the 1970s when the population of Nigeria was less and far less Nigerians were domiciled in UK.

There is definitely a strong case for mutual agreement to split Nigeria into six countries, if possible more. Why not? Many countries in Africa and indeed the world have populations of less than 10million people.

Why must we be forced to live in one country that is proving incapable of been managed to the satisfaction of the vast majority of the people since Lord Lugard and his wife deliberately merged such huge areas for the selfish benefit of the British empire and to the indefinite pain of the people so merged? By Tony Ishiekwene