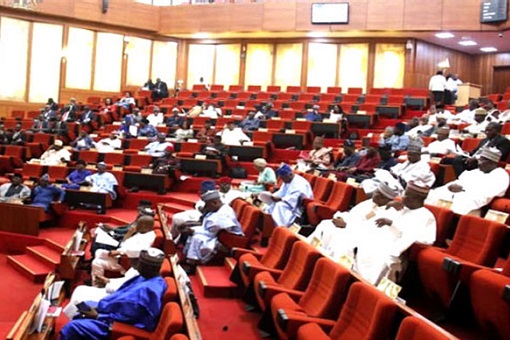 Insecurity has been the major call out for the government to bring a lasting solution to the menace. The Senate has demanded that President Muhammadu Buhari declare a full-scale war on bandits terrorizing some parts of Nigeria, following their official designation as terrorists. Senate tells Buhari to tackle terrorists. The motion was sponsored by the

Insecurity has been the major call out for the government to bring a lasting solution to the menace. The Senate has demanded that President Muhammadu Buhari declare a full-scale war on bandits terrorizing some parts of Nigeria, following their official designation as terrorists.

The motion was sponsored by the Senator representing Niger East, Senator Muhammed Sani Musa. The motion was titled, “Recent attack on communities in Shiroro Local Government Area of Niger State: A call for action”.

Going further, the Senate has called on “the Federal Government to declare a full-fledge war on these unscrupulous elements since they have been declared as terrorists.”

Lawmakers have also called on the Federal Government to set up a military base in Shiroro, stating that it would help restore confidence in the security and safety of the affected communities and also it would protect national assets located within the area such as the Shiroro hydro-electric power dam.

Senator Musa also spoke about the several persons confirmed dead in an attack by terrorists in the Shiroro Local Government Area of Niger State, he noted that on Friday, five vigilante members were killed in an attack on a local market and some communities in Shiroro.

According to Senator Musa, “There was a lot of destruction, with many people sustaining multiple gunshot injuries and others kidnapped and taken to an unknown destination.

The current sad reality is that there is no longer a semblance of security in the whole of Lakpma axis of Shiroro Local Government Area. These attacks by armed groups have continued in the North-west and North-Central Niger State despite repeated government assurance to address the escalating atrocities. Over 151,380 people, mostly peasant farmers, were displaced by the activities of bandits in the last two years.

The displaced persons were registered in 13 local government areas of the state, with the Rafi council area neighboring Zamfara and Kaduna topping the chart with 28, 987 displaced persons.” He spoke.

It must be noted that the country has been battling with insecurities, particularly in the Northern part of the country in recent times, government are yet to give a lasting solution to the problem.

Mohammed Sani Musa born May 11, 1965 is a Nigerian politician and the senator representing the Niger East Senatorial District of Niger State at the Nigerian 9th National Assembly.

On November 5, 2019, the Nigerian Senate re-introduced a bill that sought to regulate the use of social media in the country, leading to public outrage. The bill, “Protection from Internet Falsehood and Manipulations Bill 2019” was one of the 11 bills read for the first time at the floor of the house that day. Musa sponsored the proposed legislation.

“Niger is a state in the Middle Belt region of Nigeria and the largest state in the country. The state’s capital is at Minna. Other major cities are Bida, Kontagora and Suleja. It was formed in 1976 when the then North-Western State was divided into Niger State and Sokoto State.

It is home to Ibrahim Babangida and Abdulsalami Abubakar, two of Nigeria’s former military rulers. The Nupe, Gbagyi, Kamuku, Kambari, Gungawa, Hun-Saare, Hausa and Koro form the majority of numerous indigenous tribes of Niger State. The state is named after the River Niger. Two of Nigeria’s major hydroelectric power stations, the Kainji Dam and Shiroro Dam, are located in Niger State, along with the new Zungeru Dam.

The Jebba Dam straddles the border of Niger state and Kwara state. The famous Gurara Falls is in Niger State, and Gurara Local Government Area is named after the Gurara River, on whose course the fall is situated. Also situated there is Kainji National Park, the largest National Park of Nigeria, which contains Kainji Lake, the Borgu Game Reserve and the Zugurma Game Reserve”. This section is culled from WIKIPEDIA. https://en.wikipedia.org/wiki/Niger_State.