Economic and Financial Crimes Commission (EFCC) had begun a probe into the finances of former governor of Lagos State and All Progressives Congress (EFCC) strongman, Bola Ahmed Tinubu, 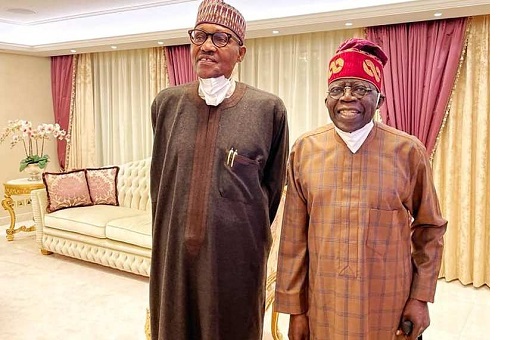 EFCC reportedly wrote a letter to the Code of Conduct Bureau (CCB) asking it to furnish the commission with details of Tinubu’s assets declaration form. Media reports had it that petitions were written against the former governor of Lagos State Bola Ahmed Tinubu under the chairmanship of Ibrahim Magu, among the allegations that was petition

EFCC reportedly wrote a letter to the Code of Conduct Bureau (CCB) asking it to furnish the commission with details of Tinubu’s assets declaration form. Media reports had it that petitions were written against the former governor of Lagos State Bola Ahmed Tinubu under the chairmanship of Ibrahim Magu, among the allegations that was petition was that Alpha Beta, a company purportedly owned by the former governor Bola Ahmed Tinubu alleged ownership of sundry properties and concern.

This was dated on November 6, 2020, marked CR/3000/EFCC/LS/Vol4/322 and signed by its then Zonal Head, Abdul Rasheed Bawa, who is now the chairman of the Economic and Financial Crimes Commission, EFCC.

It was also added to the austere national good that inheres in it, which formed part of the rationale for the previous pieces I wrote on Tinubu’s touted aspiration to become the president of Nigeria. With an understanding of the mindset of those who make political decisions in Nigeria, it was not difficult to appear like a Nostradamus on the projected travails of a man who, in close to 22 years of Nigeria’s Fourth Republic, has gradually grown to become a power octopod.

Corruption in Nigeria is indeed a calamity. Many analysts have imputed a genetic drift into it. Scholars have also submitted that Nigeria would continue to be the laughing stock of the world, even as it witnesses regression in all departments of statehood, until that national leeching spirit is exorcised. With this as the background, asking the EFCC not to do its constitutionally-assigned duty of smoking out malefactors, will tantamount to seeking nourishment and flourish for evil to continue its imperious reign in Nigeria.

However, the modus operandi of this EFCC searchlight on Tinubu appears very shroud and bears every imprimatur of politics. Exchanged in hushed tones and whispers, information that Tinubu’s hold on its Former chairman Ibrahim Magu, is akin to that of a Mandarin, has been oscillating in the public domain for a while now. It was even said that, aware of their incestuous dalliance, Buhari and his power apparatchik deliberately refused to confirm the Kanuri-born cop’s tenure as substantive chairman of the commission as a way of exhibiting their scorn for Tinubu.

Tinubu who literally intoxicated at the outcome that he announced to some group of people that what he meant was not only that all corporations and institutions of Nigeria were in his pocket but that Nigeria had thenceforth begun to oscillate right on top of his thumb. As vast as he is about the temperature of power and power politics in Nigeria, never did it occur to him to factor into the equation the understanding that, requiting good with blood-curdling wickedness was the genetic component of Nigerian political chess-gaming.

During this time, the most potent weapon for Tinubu to achieve whatever he wanted as a political aspiration in a larger Nigeria was to, like Chief Obafemi Awolowo, tighten his hold on his western Nigerian base, become Awo-ly consequential therein and use this hold to secure a negotiation on administering the rest of Nigeria. Unfortunately for him, gradually, he lost grips of his base, so much that, if an election is conducted in Yorubaland today, Tinubu can scarcely win two states to his side.