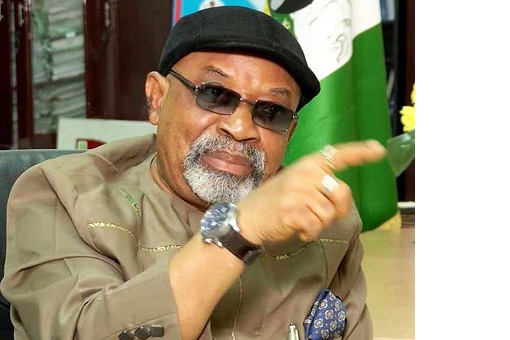 Minister of   Labour, Employment and Productivity, Senator Chris Ngige, who said he had yet to be officially put on notice by ASUU, said the government would not allow the union to embark on the strike threatened by the university lecturers on Monday. Chris Ngige made this known on Tuesday while appearing on Politics Today. FG

Minister of   Labour, Employment and Productivity, Senator Chris Ngige, who said he had yet to be officially put on notice by ASUU, said the government would not allow the union to embark on the strike threatened by the university lecturers on Monday.

Chris Ngige made this known on Tuesday while appearing on Politics Today.

FG assures students not to worry about ASUU threatened strike.

Ngige said, “The strike will not happen. For one, I know that the fund to pay with is there and the Ministry of Education has assured me that by Wednesday they would emanate letters to make sure that the disbursement reaches the accounts of the various universities. We are not paying the unions directly; it will get to the universities’ accounts.

“I will have a meeting with the Minister of State for Education who is the one in charge of the affairs now because the main minister (Adamu Adamu) is overseas on health grounds. I will evaluate the situation with him and we would make sure that the disbursement goes on.”

ASUU has given the Federal Government a 21-day ultimatum over the failure of the government to implement the agreement reached with it.

The Minister of State for Education, Chukwuemeka Nwajiuba, claimed that the union had failed to submit a breakdown of the workers entitled to the N22.1bn earned allowances.

Prof Emmanuel Osodeke, the President of ASUU, at a press conference held on Monday had blamed the Federal Government for failing to honor the agreement it signed with the union, which made it call off its strike in December 2020. ASUU embarked on a nine-month strike in March 2020, following its disagreement with the Federal Government over the funding of universities and alleged ineffectiveness and discrepancies around the Integrated Payroll and Personnel Information System and others.

The Minister of Labour, Employment and Productivity, Chris Ngige, at a meeting had assured ASUU that the N22.1bn earned allowances captured in the 2021 supplementary budget would soon be accessed by university workers. National Universities Commission also promised to pay the sum of 30bn as a revitalization fund for federal universities, Osodeke on Monday said that the Federal Government had yet to implement the agreements and was not giving cogent reasons for not doing so.

However, Ngige was asked if he had received a notice from ASUU indicating that the lecturers would embark on strike. He said, “No. I’m still in the office (as of 7 pm) and I’m working. Till now, I have not gotten communication from them but that is not to say that having seen that they have been addressing press conferences that they have issued an ultimatum, that the government won’t be proactive or the Ministry of Labour will not be proactive.”

Going further Ngige also said, one of the mandates of the ministry is to settle industrial disputes. “As far as we are concerned, we have hit the ground running, making contacts with their real employers – the direct employers of university teachers, which is the Ministry of Education and the National Universities Commission,” he said.

The Minister also said “The fund is ready. The fund is in the account of the National Universities Commission and the Ministry of Education. They were doing what they called auditing of the earlier disbursed funds.

“Universities were supposed to retire the earlier funds given to them. As of the last meeting, 11 universities had not satisfactorily done that and, therefore, we gave a timeframe of two weeks to get those universities to conform and they would release the money.”

Charles Ngige also stated that, what was agreed with ASUU “in December last year has been paid,” saying the current issue has to do with the subsequent payment. “The other one had been paid (between) January and February. This is now the second charge that is due in the agreement,” he added.

According to him, the government has paid earned allowances totaling N22.72bn.

“I am not trying to make a case for the Ministry of Education and NUC (on) why they should not do what they are supposed to do but I know that before the next two weeks, we can sort out some of those low-hanging fruits. There are no problems because the money is already there,” Ngige said.

Charles Ngige made this known on Tuesday while appearing on Politics Today.