Lagos State: How ungrateful are the Igbos? 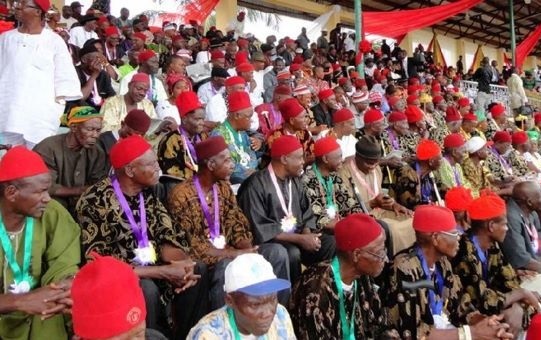 As the social media frenzy about the emergence of Bola Ahmed Tinubu as the presidential flag bearer of the APC reaches a crescendo, one cannot but ignore those at the fore of the attacks on the person of a Yoruba man vying legitimately to be president of Nigeria – the Igbos presently residing in Lagos

As the social media frenzy about the emergence of Bola Ahmed Tinubu as the presidential flag bearer of the APC reaches a crescendo, one cannot but ignore those at the fore of the attacks on the person of a Yoruba man vying legitimately to be president of Nigeria – the Igbos presently residing in Lagos State.

WHAT DO THE IGBOS HAVE AGAINST THE YORUBAS?

It is an open secret that the Igbos greatly dislike the Yorubas. In fact, the latter hate the former with a passion. This is rather surprising, given the fact that the two-share geographical and historical affinities.  Firstly, they are both the two major ethnic groups in Southern Nigeria. Secondly, the two were both part of the Southern Protectorate during the colonial administration of the British. This was before the amalgamation of Southern Nigerian Protectorate and the Northern Nigerian Protectorate to form the single colony of Nigeria, in 1914. Also, it was the nationalists from both the Yoruba and Igbo extraction, led by the likes of Chief Obafemi Awolowo and Dr. Nnamdi Azikiwe that led the struggle for independence and self-government in Nigeria.

The Igbos and Yorubas and the minority ethnic groups down south also share certain cultural similarities in such areas like food, dressing and traditional form of worship. The Yorubas have the White Garri, while the Igbos have the Yellow Garri. Yoruba women tie ‘wrapper’ and headgear just like the Igbo women. Their northern counterpart are not known for this. As they normally wear long overflowing robe and head covering-Hijab, Burka and Niqab. The Yoruba system of divination, Ifa is called Affa in the Igbo language. The two tribes both worship the god of thunder — called Sango in the Yoruba language and Amadioha in the Igbo language. Time will not suffice to reel out the other socio-cultural and historical linkages between the Yorubas and the Igbos.

The Igbos have shown at various times in the past they that do not like the Yorubas. At inception of the First Republic, the Igbos preferred to team up with the Northern politicians to from a coalition government led by Sir Abubakar Tafawa Balewa. This was done at the expense of the bright and progressive elements in the Action Group led by the late sage, Chief Obafemi Awolowo. This is in spite of the fact that it was both the Yoruba and Igbo nationalists that championed the struggle for independence. The Northern leaders at that time were passive, unassertive, complaint and yielding to the colonialists.

In 1979, Dr. Nnamdi Azikiwe’s party, Nigeria Peoples Party still chose to team-up with a northern party, the National Party of Nigeria. Later in 1983, the much anticipated Awo-Zik coalition did not see the light of day. The Igbos’ dislike of the Yorubas is age-long and deep-rooted. The hatred was intensified by the perceived role, Chief Obafemi Awolowo, played during the Nigerian Civil War (1967-1970). The Igbos believe (till date) that it was Chief Obafemi Awolowo’s strategic thinking and ingenuity that aborted their secession bid.

There was replay of this disdain and hatred for the aborted Third Republic and the June 12 crisis that followed. The Igbos saw the annulment of the June 12, 1993 Presidential Elections that was won by the late business mogul and philanthropist, Chief MKO Abiola, the exclusive problem of the Yorubas.  The Igbos failed to see the bigger picture. They did not see it as an attack on democratic values and principles, rather, saw it from the myopic prism of ethno-centrism. They forgot that an injury to one, is an injury to all.

The average Igbo man has an elitist arrogation and strongly believe the Igbo man and ways is superior to all who hold sway in Nigeria. Thus, the Igbos hold no prisoner in their evaluation of the other Nigerian co-habitants and casually use certain derogatory labels when referring to the Yorubas.  They call the Yorubas betrayals, lazy, dirty, uncouth and cowards. Also, the Igbos refer to Yorubas as Ndi Ofe Manu, meaning people who are fond of eating oily soup.

The Igbos have not and will not forget the supposed role played by the Yorubas, most especially Chief Obafemi Awolowo, the then Minister of Finance and the defacto Vice-President of the Federal Republic of Nigeria. They also view in a gaze of hatred the persons of the two Yoruba Generalissimos — General Benjamin Adekunle and General Olusegun Obasanjo. These lots will remain the enemy of the Igbo nation. Tinubu has recently won the invite to this exclusive club. Hurray for the JAGABAN!

WHY ARE THE IGBOS SO BITTER AGAINST BOLA TINUBU BECOMING PRESIDENT?

The tirade and bitterness of the Igbos against the emergence of a Bola Ahmed Tinubu becoming the president of Nigeria is due to certain perceived sins the Igbos (especially the ones residing in Lagos State) believe have been committed against them by the “Jagaban”.

This deep animosity the Igbos have for Bola Ahmed Tinubu date back to the build-up of the 2015 General Elections. The polity was heated up and polarized along ethnic lines. It is a known fact that Bola Ahmed Tinubu is the major architect and pillar of the All Progressive Congress (APC). They saw APC as a party for the Yorubas and the Northerners. They then saw the then incumbent President and presidential flagbearer of the People’s Democratic Party (PDP), Dr. Goodluck Ebele Jonathan, an Ijaw man as a candidate of the South-South and South-East regions.

This affair led to war of words between the Yorubas and the Igbos and eventually the Igbos claim of the ownership of Lagos and calling Lagos “a no man’s land” to the chagrin of Oba Rilwan Akiolu, the Oba of Lagos and other Yorubas. This was the last straw that broke the proverbial camel’s back. Recalling all that followed as a result of this ugly episode is like opening a can of worms.

Then came 2019 General Elections, the pent-up and carried over tensions from the previous elections reached its peak in the wake of the Okota crisis, where some thugs were said to have invaded and disrupted a voting process whose outcome was deemed to favour the PDP.

The protracted feud between the Lagos State Government and Igbo traders over the proposed demolition of the main section of Ladipo International Auto Parts Dealers market, in Mushin further heightens this ethnic rift.

There are some shared videos on the social media posted by the Igbos citing instances of poor infrastructure in Lagos State and then stating “Look at Tinubu’s Lagos. Is this the person you want to become your president?”. Is it only in Lagos State that we have case of poor infrastructure? Don’t we have even worse cases in other parts of the country, and most especially in South-Eastern States? The Igbos definitely are  up to some mischief again.

WHY ARE THE IGBOS SO BITTER AGAINST A YORUBA MAN BECOMING PRESIDENT?

The answers to this question is not far-fetched. Ever since the end of the Nigerian Civil War, the Igbos have not been able to be at the mainstream of national politics and governance. Also, the bars have been raised against them in most Federal Ministries, Agencies and Departments. The Igbos have been deliberately excluded and prevented from attaining strategic and key leadership positions in the Federal Civil Service, the military and in other security agencies.

Also, the Igbos lacked the financial war-chest to participate actively in the National Indigenization Reforms in the early 1970’s as they were just recovering from the aftermath of the Nigerian Civil War. They could not take advantage of this golden opportunity. Their weak financial positions prevented them from been active players in Corporate Nigeria.

Above all, the Igbos are bitter that they have not been able to produce a democratically-elected President and Commander of the Armed-Forces of the Federal Republic of Nigeria after the war and even frankly the country’s entire political history — the Presidential title of Dr. Nnamdi Azikiwe in the First Republic was a ceremonial one, the substantive and constitutionally recognized leader and head of government was Sir Tafawa Balewa, the country’s prime minister.

Hence, the need to “demarket” a Yoruba man, to the advantage and benefit of their son, Peter Obi.  They are attacking Bola Ahmed Tinubu because they are not happy with his soaring political profile. They believe that an attack on the reputation of Bola Ahmed Tinubu will translate into political gains for Peter Obi. This is definitely not how to play civilized politics. But the Igbos are not known to play a fair game after all.

The Igbos are ingrates. The Yorubas provide them a friendly, accommodating and conducive environment to conduct their businesses and make their livelihood in South West states. Apart from this, some Igbos have been appointed into past and present administration in Lagos State. Ben Akabueze, the Director- General of the Budget office for the Federal Republic of Nigeria was the Commissioner for Economic Planning and Budget for Lagos State from 2007 to 2015. Another Igbo, Joe Igbokwe is presently the Special Adviser to the Lagos State Governor for Drainage and Water Resources. The present Commissioner for Economic Planning and Budget, Sam Egube, is from Delta State. This speaks volume of the magnanimity and accommodating nature of the Yorubas, the Lagos State Government and Bola Ahmed Tinubu.

HOW THE YORUBAS CAN NAVIGATE THE HATE AROUND THEM.

One, this is Lagos State. A state in the South West of Nigeria. If the Igbos do not like the Yorubas, they should make Anambra State their paradise and then relocate there and leave “underdeveloped Lagos” to the “primitive Yorubas as they often label us. The Igbos should remember that you can’t eat your cake and have it. Rather than hating their host in Lagos —the Yorubas — they can as well relocate back to Anambra State or any of the other states in the South-East.

The Yoruba youth should not get sucked into the Igbo agenda. Forget the OBEDIENT slogan, identify with the BAT agenda. That is where your interest lies.  You will be excluded if an Igbo man becomes president. It is in their DNA to band together. Just look at mundane things like Big Brother Naija where an Igbo hold sway. These days, a Yoruba barely make the numbers on such programmes. Even Goodluck Jonathan from the South -South, who the Yorubas fought for to become president, made his first agenda when he became president marginalising the Yorubas. If someone who is from Bayelsa state did that to the Yorubas, just imagine what an Igbo man will do. The wise thing for any Yoruba to do is to support and vote massively for Bola Ahmed Tinubu as president. Anything apart from this is equal to committing political suicide. Forget political correctness, there is presently a fight for the soul of Nigeria. And woe befall the man who is left behind.

In conclusion, it is high time the Yorubas band together given the present state of Nigeria. Make no mistake, the Igbos abhor we Yorubas. Vote for a Peter Obi at your own peril. Let no Yoruba man or woman be deceived! It is only Bola Ahmed Tinubu that can protect and further the interests of the Yorubas. For me and my household, it is Asiwaju Bola Ahmed Tinubu all the way.