LASTMA as an instrument of extortion and entrapment in Lagos State. 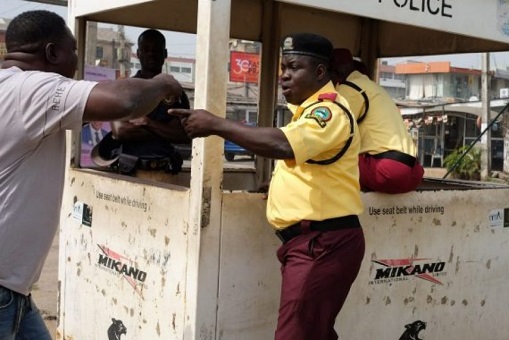 The supposed purpose of the Lagos State Traffic Management Authority (LASTMA) is to “manage traffic in Lagos State, Nigeria”. In order words, LASTMA is traffic wardens tasked with the sole purpose of managing the free flow of traffic. But, as a lot of Lagosians will observe, the agency has morphed into a money-making machine both

The supposed purpose of the Lagos State Traffic Management Authority (LASTMA) is to “manage traffic in Lagos State, Nigeria”. In order words, LASTMA is traffic wardens tasked with the sole purpose of managing the free flow of traffic. But, as a lot of Lagosians will observe, the agency has morphed into a money-making machine both for the Lagos State government, its officials, and the men wearing the LASTMA uniform.

The anger against the men adorning the uniform of LASTMA is palpable and all-encompassing. The reasons for the hostility towards LASTMA officials are not far-fetched. They have constituted themselves into the judge jury and executioner.

Their core motive has become the need to extort rather than to direct traffic. They lay in wait for erring or naive motorists, to demand bribe on the spot or threaten to take the motorist to “their office” with the prospect of coercing some peoples’ life’s savings or the possibility of the forfeiture of one’s vehicle. And this judgment is meted out irrespective of the gravity of the erring driver supposed offend. There is a complete dehumanisation of supposed offenders and a core to exhort, oppress, and disrobe said offender – literally, or figuratively.

But let us assume for a moment erring offenders such as those driving against traffic deserve what they get. But the mode of oppression of these cream and red uniformed officials has taken a more sinister and heartless dimension. They now entrap motorists with the purpose of exhorting. And with the many supposed road constructions, road abandonment, diversions, non-marking of roads in Lagos State, to properly direct motorists on where to presently drive on, and where not, these devil in LASTMA clothing are making a killing on the back of motorists hard-earned money.

Of note are those LASTMA officials operating at the road around “Shasha Round About” near the Access Bank. The traffic light mounted at the interception coming from the side of the Dopemu bridge is wrongly placed on the right of the road next to the petrol station to serve the purpose of directing traffic heading straight towards the Access Bank. And immediately someone who is not conversant with the area makes the mistake of crossing beyond the traffic light which should have been placed on the left side of the road, the devil in uniform invades the supposed erring motorist vehicle with the threat of loss of vehicle, or an immediate N50,000 payment to them for making a mistake of not “adhering to the traffic light.” These supposed LASTMA officials are often drunk, with cheap alcoholic concoction reeking on their breath. They act unprofessionally, display hooliganism and often boast of their vagrancy tendency and ancestries. One Officer Salami spearheads the thuggery in uniform personal tax-generating drive in this location.

As evidence of flagrant entrapment of motorists to the traffic light trap in this place are cars lined on the other side of the road negotiating to pay a bribe after having had instilled the fear of loss of vehicle or a N100,000 Lagos State Government draconian fine.

Traffic management should be done professionally coupled with a human heart. These men in cream and red uniform have visibly lost theirs. The Lagos State Government under the able government of Governor Babajide Sanwo-Olu should put his men in check. “Contiri” hard as it is. Money meant to feed the family should no longer be extorted by this …