Nigeria needs enlightenment and not miracles. 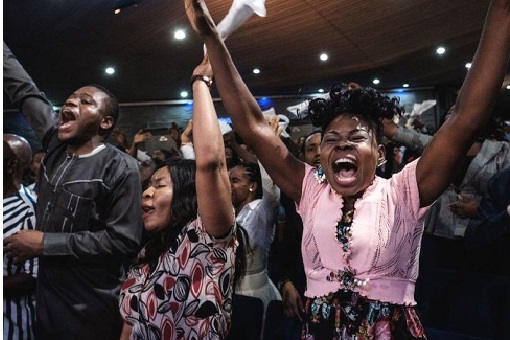 THIS WILL PROVE TO YOU IT IS NOT MIRACLES OR RELIGION WE NEED NOW IN NIGERIA BUT ENLIGHTENMENT . 1. Pacelli School For The Blind, Surulere Lagos. Established 1962. Number of visits by “Men Of God” who had come to pray for the blind students: Over 5,000. Number of students actually cured from Blindness through

THIS WILL PROVE TO YOU IT IS NOT MIRACLES OR RELIGION WE NEED NOW IN NIGERIA BUT ENLIGHTENMENT .
1. Pacelli School For The Blind, Surulere Lagos. Established 1962.
Number of visits by “Men Of God” who had come to pray for the blind students: Over 5,000.
Number of students actually cured from Blindness through their Prayers: ZERO.
2. National Orthopaedic Hospital, Igbobi Lagos. Established 1945. It has 450 beds which have always been filled to capacity. Number of Bones reset or Limbs regrown through miracles: ZERO.

Nigeria needs to be enlightened.

3. Lagos Island General Hospital is the first to be established in Nigeria in 1893. It has a fully functional Mortuary (since records began) just before Nigeria gained independence. Number of people raised from the dead BY ANY MAN OF GOD,, spiritually or otherwise… ZERO.
These are verifiable, well documented FACTS. The reason WHY miracles have not been recorded in these mentioned places is because they keep BEFORE & AFTER Records. And also, the patients are REALLY Blind, ACTUALLY Disabled, and CONFIRMED Dead. Statistics don’t lie. Reality don’t deceive.
So, if I may ask the religiously Overdosed simpletons reading this… Are you not bothered that your intelligence is being ridiculed by all these unsubstantiated miracles happening to other people in churches, crusades, and other stage-managed religious gatherings?
The recipients of these so-called miracles are people who you don’t know their actual identity, or where they live, or the real verified nature of their ailments, or any documented proofs, etc etc etc…
I have asked several times WHY are these miracles only happening in Africa. Are we really this dumb as a people??? The late Reinhard Bonkke spent 50 years raising dead people back to life in Africa.
He did not raise a single dead body in his country Germany, or in the whole of Europe & America. NOT A SINGLE ONE. Is it only Africans that can be raised from the dead???
Anyways…
Whether I talk or not, people who wear Okirika clothes to church today will still drop money for Pastors who wear Armani Suits … People who are struggling to pay rent will still drop money for Pastors who own Mansions … People who struggle to pay school fees will drop money for Pastors who own schools …
People whose kids can’t sleep at night bcos of Mosquitoes will still drop money for Pastors whose kids are living abroad …
People who struggle to pay for Uber will still drop money for Pastors who own fleet of expensive cars… People whose old parents are living in relative lack, poverty, and suffering will still be shouting “Tithe Is Working For Me” … Then later, they will start  disturbing their friends and families for financial assistance, while their Religious Dealers, sorry Leaders, control billions of different currencies.
How can people be so comfortable with being so gullible? Religiously overdosed people are actually proud about the fact that they are being scammed, swindled, and taken for a ride!
They will even ask you “Is It Your Money?”. Let’s face it … It’s easier to fool most people, than to convince them that they have been fooled. But they can only fool themselves, they can NOT fool Reality.
I understand the situation in the country. Things are hard. People turn to “Help From Above” mostly bcos they are Helpless…Hopeless … Hapless. Yes Religion gives you Hope.
Yes I know. But when you pay for this Hope, it’s no longer from any God. And it’s not genuine. The only ones who got richer in that arrangement, are the Middle Men collecting the payment on behalf of whatever God. That is just your Pastor’s JOB. You are just their side hustle.
An Abuja Pastor even said ” Your Destiny Is Tied To Your Pastor”, & the people shouted “Amen!”. Imagine that … A whole Destiny tied to just one man??? What happens if the Pastor dies before YOU!!! Your Destiny would be buried with him???!!!
Most Pastors don’t only fleece you  of the little hard-earned money you have, they also make a concerted effort to control your entire existence… T,hey tell you how to dress, how to look, what to eat, when to fast & pray, when to marry, who to marry, who to associate with, what jobs to do, when to work, what to do with your money …even when to travel etc …
Your entire existence is subject to the whims, caprices & manipulations of just one Man, ALL IN THE NAME OF “GOD SAID… GOD TOLD ME TO TELL YOU…”.
This morning, I’ve seen 2 video clips…
The first one was on the wall of my UK Chairman, Michael Adeosun …and it only proves one thing. Nigerians are so religious because poverty has been weaponized by the elites. If you see the Prayer Requests of most Nigerians, you’d realize that what they need is actually Good Governance, Functional Institutions  & a System that works.
Conclusively…
These words and thoughts are my own, and it’s something that makes me wonder why some people are so religiously volatile but mentally dormant. I’m so perplexed.
Religion is not the problem of the black man… The black man is the problem of Religion. Because there are many things we could have copied from the white man, but we chose Religion and gave it our full concentration… And now we’ve cooked it until it’s overdone!
QED.
Culled