Osun Election: The beginning of the end for the APC? 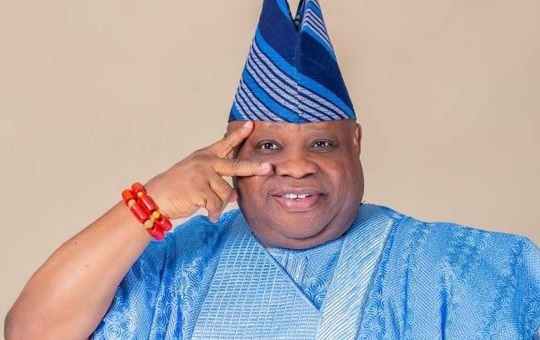 Does the just concluded governorship election in Osun State, wherein the candidate of the PDP, Senator Ademola Adeleke emerged winner signals a rejection of the APC and its mismanagement of the country for the last seven years?  Or is this just a rejection of the candidacy in the state of the outgoing governor, Adegboyega Isiaka

Does the just concluded governorship election in Osun State, wherein the candidate of the PDP, Senator Ademola Adeleke emerged winner signals a rejection of the APC and its mismanagement of the country for the last seven years?  Or is this just a rejection of the candidacy in the state of the outgoing governor, Adegboyega Isiaka Oyetola? And does it forebode a gloom for the presidential aspiration of the APC candidate, Ahmed Bola Tinubu? Is the Jagaban losing his iron grip on the people structure in the South West of the Nigerian state?

HOW ADEGBOYEGA ISIAKA OYETOLA FAILED THE PEOPLE OF OSUN STATE?

Although, Governor Oyetola kept many of his promises to the people of Osun State, especially in the areas such as payment of worker’s salaries, payment of pension arrears and debt repayment, the people in the state however felt he failed them in some areas that are sensitive to them.

The general state of affairs in the country – most especially the galloping inflation and high cost of living, insecurity, uncertainty and despair – worked against Governor Oyetola in his re-election bid. Just like in other parts of the country, the people of Osun State used the last governorship election in Osun State to protest against the APC-led federal government. Many are of the opinion that the APC government led by President Muhammadu Buhari has brought untold hardship to Nigerians. Some Nigerians even believe this APC administration is worse than any of the previous administration in the country.

Aside the general gloom witnessed in the country, in Osun State, some domestic factors also worked against the APC candidate in the just concluded polls. Unlike the PDP candidate, Senator Ademola Adeleke, the APC candidate, Governor Oyetola is widely considered to be stingy, as he does not believe in the sharing of palliatives or ‘largesse’ to the people of the state. This affected his popularity rating in the state.

In a predominantly Muslim state, the APC candidate failed to warm his way to the hearts of Islamic clerics and Muslims in Osun State. He was considered to be too elitist and distant from the Islamic clerics.  His predecessor, Ogbeni Rauf Aregbesola used to share rams to Islamic clerics during Salah festivals. Governor Oyetola failed to replicate this gesture.

Another factor that worked against APC in the last polls in Osun is the rebellion of civil servants in the state. Despite the fact that the APC candidate released a sum of N1 billion for the payment of pensions and entitlements of retired civil servants and the promotion of civil servants, this still did not satisfy or assuage the feelings of the people.

Governor Oyetola inherited the problem of settlement of retired primary school teachers and Local Government workers together with the payment of contributory pensions of retired officers of the civil service and parastatals in the state. This also contributed to the loss of APC in the elections.

The APC candidate is also neither charismatic nor articulate. Some will even claim he is rather lukewarm. Something uncharacteristic of a politician, especially in Nigeria. He is also said to ‘not be in touch’ with the people of Osun State. He rode to power in 2018 because of his relationship with Asiwaju Bola Ahmed Tinubu, the presidential candidate of the APC in the 2023 general elections. This is unlike his arch-rival, Senator Ademola Adeleke, who connects well with the voters.

HOW SENATOR ADEMOLA ADELEKE FINALLY MANAGED TO CLAIM THE PRIZE?

Against all odds, Senator Ademola Adeleke finally realized his ambition to be elected the Governor of Osun State. This is coming nearly after four years after losing to the incumbent governor and the APC candidate, Governor Oyetola by a small margin. In a hard-fought victory, he secured 403,371 votes as against the 375,027 votes of that of the APC candidate.

Ademola Nurudeen Jackson Adeleke was born on the 13 May 1960. He is a Nigerian politician and businessman. He was a senator that represented the Osun-west senatorial district between 2017 and 2019. Adeleke commenced his primary education at Methodist Primary School, Surulere Lagos State then relocated to Old Oyo State and attended Nawarudeen Primary School, Ikire. He progressed to The Seventh Day Adventist Secondary School, Ede also in the then Old Oyo State and later moved to Ede Muslim Grammar School Ede, where he finished his secondary school education before relocating to the United States. He started higher studies at Jacksonville State University, Alabama in the United States where he majored in criminal justice and with minor in political science. After much controversies surrounding his educational qualification, he went back to school and got enrolled at Atlanta Metropolitan State College in the United States, where he obtained a Bachelor of Science degree in criminal justice in 2021.

Beyond his mesmerizing dance steps and the perception of an’ unserious character’, Senator Ademola Adeleke comes from the illustrious Adeleke family in Ede, in Osun West Senatorial District. His father Raji Ayoola Adeleke, was a senator and the traditional title holder of Balogun of Ede. His elder brother, Late Alhaji Isiaka Adeleke was the first executive governor of Osun State. Dr Adedeji Adelele, a Nigerian billionaire, business magnate and the president of Adeleke University is also his brother.

Some factors and conditions facilitated the emergence of Senator Ademola Adeleke in the last governorship polls in Osun State. The prevailing circumstances that existed during the conduct of the previous governorship elections in the state had changed drastically. This played out in helping the PDP to secure victory over the APC.

Firstly, the election was considered to be peaceful. This is contrary to what occurred in the 2018 polls where pockets of violence were recorded in different parts of the state. The reports received from observers and security operatives and the people of the state is that the election was free and fair. The accreditation and voting went on smoothly in most of the polling units.

Another factor that worked in favour of Senator Ademola Adeleke was the inability of Senator Iyiola Omosore to help secure victory for the APC in his stronghold of Ile-Ife. He failed to replicate the feat that gave the APC the edge over the PDP in the governorship elections in 2018.

The overwhelming support of the hip-hop star, Davido, who is a nephew of Senator Ademola Adeleke equally played a major role in securing victory for the PDP in the election. He was part of the campaign train of the dancing senator. Davido mobilized support for his uncle. Most voters in the states that were fans of the popular artiste must have been influenced by his brand and presence in the state during the poll to vote massively for his endorsed candidate.

The presence of PDP stalwarts like Alhaji Atiku Abubakar and Dr. Bukola Saraki also added bite to the campaign of the PDP. They stood by Senator Ademola Adeleke through thick and thin.

Also, the election win was seen by many as a payback for the APC failure, as a vast majority of the people of Osun State still harbor a resentment for the ruling party. They believe Senator Ademola Adeleke was robbed of his mandate in 2018. The atmosphere of the free and fair election also enabled the people to stage a revenge against the APC.

The adoption of the bimodal voter accreditation system (BIVAS) provided the platform for the conduct of a free and fair elections. BIVAS, an electronic device designed to read permanent voter cards (PVCs) and authenticate voters prevented the APC and the incumbent governor from influencing the election results – as signed results sheets are captured and also uploaded to the INEC servers immediately.

HOW THE DIVISION IN THE OSUN APC CAMP EVENTUALLY DID THEM IN?

The defeat of the APC in the last governorship elections in Osun State is a good reminder of the maxim: “Together we stand, divided we fall”. The acrimony and in-fighting within the ranks of the party in the states prevented it from presenting a united front to secure victory and re-election for Governor Oyetola.

The major factor that contributed to the defeat of the APC is the unresolved acrimony between Ogbeni Rauf Aregebesola and Asiwaju Bola Ahmed Tinubu and Governor Oyetola. The cause of the hostilities was over Aregbesola’s preferred candidate, Moshood Adeoti, a former Secretary to the State Government. Asiwaju Bola Ahmed Tinubu had handpicked and ‘anointed’ the incumbent governor over Adeoti. This affair had been tearing the party in the state apart.

Also, the failure of the APC to manage the fallout of the party’s primaries also hampered its chances at the governorship elections. Aspirants with bitterness over the primaries refused to reconcile with other sections of the party. This further worsened the crisis and division in the party. As a matter of fact, the APC went into the governorship election a divided house. And, remember the biblical message: “A house divided against itself, cannot stand”.

WHAT THIS MEANS FOR THE PRESIDENCY QUEST OF BOLA AHMED TINUBU?

The victory of the PDP in Osun calls for a lot of soul searching for the APC and its presidential flagbearer ahead of the 2023 general elections. The defeat of the APC in Osun has left many in doubt to the ability of the party to secure landslide victory in the six South West states in the 2023 presidential elections. A clean sweep victory in the South West is vital and strategic to the presidential ambition of Asiwaju Bola Ahmed Tinubu. He is Yoruba and don’t let us forget the saying that: ‘Charity begins at home’. If he cannot secure massive votes in the South West, where else will he achieve this feat.

Another question that comes to the front burner is if the defeat of APC in Osun signals the beginning of the end of the party in the South West and the country in general? This is against the backdrop of the unpalatable state of the country — insecurity, galloping inflation, high cost of living, unemployment, epileptic power supply, lingering ASUU strike, religious and ethnic tensions amongst others. It appears the people of Osun State and Nigeria are disillusioned with the APC-led government.

Or will Nigerians vote for persons rather than the party in 2023? In 1993, Nigerians voted massively for M.K.O Abiola and not the Social Democratic Party(SDP). Are we to expect the replay of such 30 years later? The truth be told, Nigerians will vote along ethnic lines (with no considerations for party affiliations) in 2023. Yorubas will mostly vote for Tinubu, Hausas and Fulanis will mostly vote for Atiku and the Igbos for Obi. It is the man amongst this lot who reaches out more and garner more votes from other regions of the country that will triumph come 2023.

The just concluded election in Osun State speaks to the need for elected government representative to do right by the people when given a mandate. If outgoing governor, Adegboyega Isiaka Oyetola, did everything within his power to better the lives of the people of Osun State, the good work done would have been enough to ensure he is re-elected into power. But when government representatives fail to do what they canvassed they will while in government, it is imperative of the people to thus vote them out of power. Governance is a serious business, thus, elected officials must take it as such. When elected officials fail the people, they must one by one experience the “won lu ‘le” phenomenon.