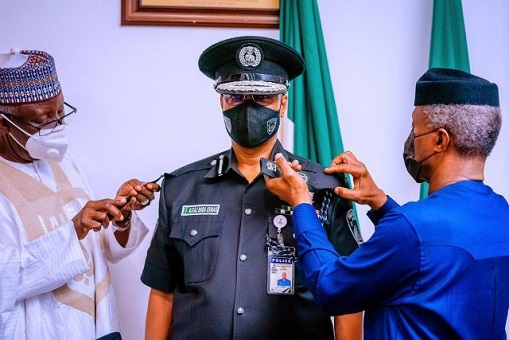 President Buhari has appointed Usman Alkali Baba as the new Inspector General of Police in place of erstwhile Mohammed Adamu. The sudden termination of the former IGP may not be unconnected with the recent space of attacks on police facilities. And, most recent, attack on police headquarter and prison break by unknown assailants in Imo

President Buhari has appointed Usman Alkali Baba as the new Inspector General of Police in place of erstwhile Mohammed Adamu. The sudden termination of the former IGP may not be unconnected with the recent space of attacks on police facilities. And, most recent, attack on police headquarter and prison break by unknown assailants in Imo State.

The newly appointed acting inspector general of police was born on March 1, 1963. He is from Geidam in Yobe state. He also possesses a record of meritorious service garnered over the years in the Nigerian Police Force.

He has a Bachelor of Arts in Political Science from the Bayero Usman University, Kano in 1985 and holds a master’s in public administration (MPA) Degree from the University of Maiduguri, Borno State 1997.

The new IGP stated in his acceptance speech that, “Being appointed to head the largest Police Force in Africa both in terms of personnel profile and operational jurisdiction is to me, more than a fulfilment of destiny.

“It is a call to national duty, particularly, at this critical time that our nation is experiencing increasingly complex and pervasive security threats occasioned by terrorism, banditry, kidnapping, secessionist agitation and sundry highly organized crimes.

He further stated that “Much as the challenge of leading the Force to address these threats in the shortest possible time frame, restore security order, and return our beloved nation to the path of national unity may appear daunting, I am inspired by the fact that from my extensive years of service, I can confidently say that the Nigeria Police is endowed with some of the finest, courageous and patriotic officers who, undoubtedly, shall support me to advance the internal security vision of Mr. President.

“I am also encouraged by the fact that the outgoing Inspector General of Police has laid a solid foundation and entrenched a culture of professional efficiency in the Force.

“These will stimulate me in my capacity as the new Acting Inspector General of Police, to strengthen our strategies and provide the requisite leadership that will change the narratives in relation to our operational approach to the current security threats.”

As IGP Adamu exits the Force, Baba called on all to join him in celebrating one of the greatest policing icons of our time.

The task of restoring the primacy of the Nigeria Police in the internal security architecture of the country, he said is the main challenge ahead of us.

“It is, however, a task that I am convinced we can surmount if we resolve as a people to partner and present a common front against the subversive and criminal elements who are the common enemies of our nation.

“I am mindful of the yearnings of Nigerians for a policing system that will not only assure them of their safety but treat them with civility and hold their human rights sacred. I promise to provide the highest possible level of professional and responsive leadership to meet this deserved aspiration.

“However, I call on the citizens to change their mindsets and be prepared to work with us in the interest of community safety and national security.

“I wish to immensely thank His Excellency, President Muhammadu Buhari, the President of the Federal Republic of Nigeria for considering me worthy of this appointment. I am fully conscious of the task ahead and His Excellency’s expectations. By the Grace of Almighty Allah (SWT), I shall not let the nation down.

“To the Police officers, I call on you to continue to support me with prayers so that this journey we are commencing together today shall lead us to the desired destination.”