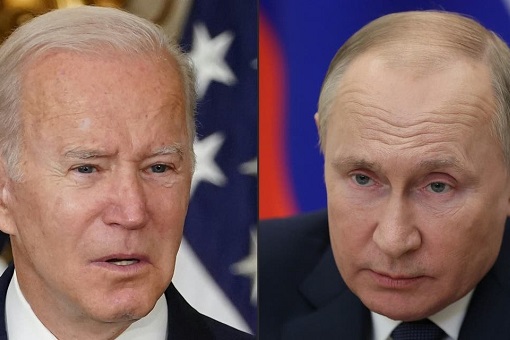 President Joe Biden has warned President Vladimir Putin against Russia attempting an attack on Ukraine.  He stated that Russia will pay a “dear price” if the nation invaded Ukraine under any circumstances. Biden warns Russia not to invade Ukraine. Joe Biden, who spoke at a news conference to mark his one-year anniversary in office, further

President Joe Biden has warned President Vladimir Putin against Russia attempting an attack on Ukraine.  He stated that Russia will pay a “dear price” if the nation invaded Ukraine under any circumstances.

Joe Biden, who spoke at a news conference to mark his one-year anniversary in office, further said a “minor incursion” by Russia would obtain a lesser response. This statement he later sought to clarify that he was referring to a non-military action, such as a cyberattack. He insisted any invasion would be met with similar reciprocal response, if Russian forces cross the Ukrainian border, killing Ukrainian fighters …“that changes everything.”

Speaking on the minor incursion remark, he said, “it’s very important that we keep everyone in NATO on the same page.” Despite series of talks in Europe last week to ease tension over the 100,000 troops Russia mounted at the Ukrainian border, a compromise is yet to be reached.

Antony Blinken, Secretary of State will be meeting with Russian Foreign Minister, Sergey Lavrov in Geneva today (Friday). Blinkin further stated that he doesn’t think that Putin has made a final decision on whether to invade or not, “my guess is he will move in.”

Jen Psaki, White House press secretary stated that the Russians could turn to an “extensive playbook of aggression short of military action, including cyberattacks and paramilitary tactics.”

“President Biden has been clear with the Russian President: If any Russian military forces move across the Ukrainian border, that’s a renewed invasion, and it will be met with a swift, severe, and united response from the United States and our allies,” he said.

President Joe Biden has however faced a barrage of criticism over the “minor incursion” remark.

“This is the wrong way to view this threat,” said Sen. Rob Portman, R-Ohio, part of the bipartisan congressional delegation that traveled to Kyiv over the weekend to meet with Ukrainian officials. “Any incursion by the Russian military into Ukraine should be viewed as a major incursion because it will destabilize Ukraine and freedom-loving countries in Eastern Europe.”

“He projected weakness, not strength,” he said.

According to Joe Biden, if Russia should invade Ukraine, one of the most considered action under consideration would be limiting Russian transactions in US financial institutions, inclusive of “anything that involves dollar denominations.” He added.

One hopes the issue will be sorted out soon.

NATO constitutes a system of collective security, whereby its independent member states agree to mutual defense in response to an attack by any external party. The NATO headquarters are located in Brussels, Belgium, while the headquarters of Allied Command Operations is near Mons, Belgium.

Since its founding, the admission of new member states has increased the alliance from the original 12 countries to 30. The most recent member state to be added to NATO was North Macedonia on 27 March 2020. NATO currently recognizes Bosnia and Herzegovina, Georgia, and Ukraine as aspiring members.

An additional 20 countries participate in NATO’s Partnership for Peace program, with 15 other countries involved in institutionalized dialogue program. The combined military spending of all NATO members in 2020 constituted over 57% of the global nominal total. Members agreed that their aim is to reach or maintain the target defense spending of at least 2% of their GDP by 2024”. This section is culled from WIKIPEDIA. https://en.wikipedia.org/wiki/NATO.