Slave markets in Libya – Who is to blame? By Elliot Booker 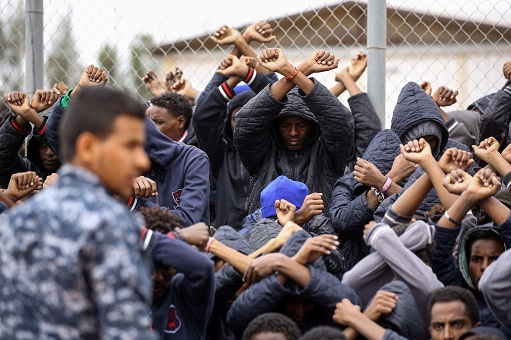 When CNN released video footage of a live slave auction in Libya, captured by journalist Nima Elbagir, shockwaves were sent around the world. Libya’s suffering and slavery didn’t just happen. Starting the bidding at $400 each, buyers purchased 12 African migrants at an undisclosed location outside the capital city of Tripoli in a matter of minutes.

When CNN released video footage of a live slave auction in Libya, captured by journalist Nima Elbagir, shockwaves were sent around the world. Libya’s suffering and slavery didn’t just happen.

Starting the bidding at $400 each, buyers purchased 12 African migrants at an undisclosed location outside the capital city of Tripoli in a matter of minutes.

How is it possible for open slave market to exist in the year 2017?
The roots of the slavery, suffering and misery in Libya goes back to the purposeful, targeted destruction of the government of Libyan leader Muammar Gadhafi.

While President Barack Obama and his secretary of state, Hillary Clinton, declared their assault on the North Africa leader was about protecting the Libyan people and standing for what is right, Libya has gone all-wrong with no solution in sight.

Slave Market in Libya and the repercussion

Raymond A. Winbush, a professor and director of the Institute for Urban Research at Morgan State University, noted that by President Barack Obama’s own admission, the worst mistake of his presidency was how he handled Libya.
With three different feuding governments, Libya has never been more unstable. This instability left the door wide open for today’s widespread corruption, human rights abuses, and the slave trade, said Dr. Winbush.

Dr. Winbush told The Final Call that Libya once boasted the highest standard of living in Africa as Col. Gadhafi redistributed oil revenues back to his people. Libya is now in utter chaos. Racism and slavery are running rampant and these are crimes Col. Gadhafi would have never permitted, he said.

Dr. Winbush also noted that the end of Col. Gadhafi’s reign was accompanied by the birth of the international terrorist organization ISIS.
Gerald Perreira, the chairperson of the Black Consciousness Movement Guyana and Organization for the Victory of the People, drew attention to CNN and its role in offering an “expose:”

“The world we find ourselves in is complex and full of contradictions. It is easy to fall for rudimentary textbook propaganda based on simplistic dichotomies, such as ‘the good guys versus the bad guys.’

If we are not aware of the complexities and nuances facing us, we can fall for this type of propaganda, whose sole aim is to keep us apart and destroy any type of unity that could strengthen our ability to defeat the enemy,” he wrote in a piece titled “Deceptive Intelligence: CNN breaks story on Slave Trade in Libya; French Government Voices Concern for African Migrants.”

“When examining and assessing the latest information fed us by one of imperialism’s mouthpieces, CNN, there are important things for us, as revolutionary Pan-Africanists, to keep in mind.

The first thing to note is the clear hypocrisy and insincerity which is nowhere more stark than CNN’s recent expose of ‘Libyan crimes against humanity’ and French President, Emmanuel Macron’s call for a special meeting of the UN Security Council to demand immediate action against this heinous ‘Libyan’ crime,” he wrote.

The slave market in Libya and the bias of Western Press

Mr. Perreira warned against giving too much credence to CNN and Western media without a critical analysis of their roles and their corporate, imperialist agendas. Lies “can come in the guise of the imperialists and White Supremacists themselves, or their mouthpieces such as CNN, BBC, Fox News or any of the mainstream corporate media outlets.

We should never forget their role as cheerleaders and purveyors of the fake news that laid the groundwork for the invasion and destruction of the Libyan Jamahiriya.

Therefore, let us ask ourselves the burning question, why are they providing us with this information, and why now? Why are the imperialists suddenly feigning concern for the plight of Africans?” he asks.

“Muammar Qaddafi and the Revolutionary Committees Movement of the Al Fateh Revolution had a monumental task on their hands: to conscientize and reposition the Libyan people for a significant role in the revolutionary Pan-African project for a United States of Africa. This is a battle for all African revolutionaries.

In Sub-Saharan African countries, where almost the entire population comprises Black Africans, we face the same battle. Here in the Caribbean, it is no different. So, when Qaddafi urged his people to look towards a United States of Africa and a revolutionary Pan-African perspective, he had to face Libyans who rejected this program in favor of Libya and the entire North African region joining the Barcelona Project, a Mediterranean-European alliance, whose aim is to take North Africa out of Africa,” Mr. Perreira continued.

“Prejudice against dark-skinned Africans exists all over planet earth. Even in countries where the population is almost 100 percent Black African, we have to contend with ‘shadism,’ a hangover from colonialism and plantation culture, where Africans with lighter skin shades are held in higher esteem than Africans with darker skin shades. However, to say that ‘Arab Libyans’ are selling ‘Africans’ is overly simplistic and deliberately misleading. There is a hidden agenda here—beware.

The objective is to ignite hostilities between so-called Arab-Africans and so-called Sub-Saharan-Africans. There is a debate amongst Africans about who is an African. On the one hand, there are those who limit the definition of African to Black Africans in the Sub-Saharan region of the continent.

On the other hand, there are those of us who believe that Africa is one, and we will resist any attempt by the imperialists to redefine and further balkanize Africa,” he continued. “Rather than becoming part of the European Community, North Africans promoting the Barcelona Project would be better off seeking out their African roots. This is what Muammar Qaddafi told all Libyans.”

The writer lived in Libya and is a Gadhafi loyalist.