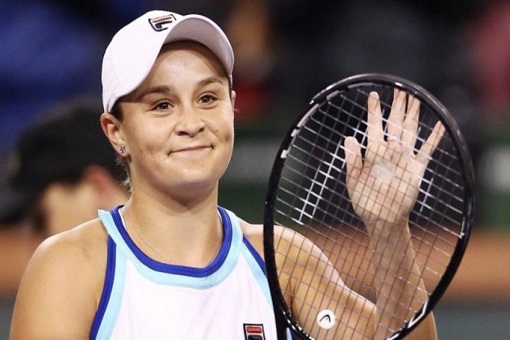 Australian Test cricket vice-captain, Steve Smith, has showered so much praise on tennis star Ashleigh Barty as she defeated World No.21 Jessica Pegula in the quarterfinals to reach the semifinals of the ongoing Australian Open.

Ashleign Barty defeated Jessica Pegula in straight sets (6-2, 6-0). the match which ended in just 63 minutes at the Rod Laver Arena. Smith has appreciated Ashleigh stating she has done extremely well.

“She’s playing very well and has been outstanding. She gets the opposition players where she wants to get them. She’s doing exceptionally well at the moment,” said Smith.

Steve Smith has also commented on Virat Kohli’s decision to stand down as India’s captain, he highly praised his successful period as skipper and his good skills in the game, he also stated that Rohit Sharma and KL Rahul are his two favorites for the vacant post.

“Firstly, congratulations to Virat. He has led the Indian team superbly well in the last six or seven years. He has done a terrific job and looking forward I would say probably Rohit or KL are the two favorites”, he said.

Ashleigh Barty is bidding to become the first Australian female to win the title at home since Chris O’Neil in 1978. Ashleign Barty is now on a nine-match winning streak after lifting her third career title at home in Adelaide earlier this month. The World No.1 Barty will now face Madison Keys in the semi-finals on January 27.

Ashleigh Barty (born 24 April 1996) is an Australian professional tennis player and former cricketer. She is ranked No.1 in the world in singles by the Women’s Tennis Association (WTA) and is the second Australian WTA singles No. 1 after fellow Indigenous Australian player Evonne Goolagong Cawley.

She has also been a top 10 player in doubles, having achieved a career-high ranking of No. 5 in the world. Barty has won fourteen singles titles and twelve doubles titles on the WTA Tour, including two Grand Slam singles titles, the 2019 French Open and 2021 Wimbledon Championships, and one Grand Slam doubles title at the 2018 US Open with partner CoCo Vandeweghe.

It must be noted that, Ashleign Barty,  has been ranked No.1 in the world, one hopes she comes first in the Madison Keys semi-finals holding January 27.

The Women’s Tennis Association was founded in June 1973 by Billie Jean King, and traces its origins to the inaugural Virginia Slims tournament, arranged by Gladys Heldman, sponsored by Joe Cullman, CEO of Philip Morris, and held on 23 September 1970 at the Houston Racquet Club in Houston, Texas. Rosie Casals won this first event.

When the Women’s Tennis Association was founded, Billie Jean King was one of nine players that comprised the WTA, also referred to as the Original 9, that included Julie Heldman, Valerie Ziegenfuss, Judy Dalton, Kristy Pigeon, Peaches Bartkowicz, Kerry Melville Reid, Nancy Richey, and Rosie Casals. Today, the WTA has more than 2,500 players from nearly 100 countries competing for $146 million in prize money.

In December 2021, following Peng Shuai’s endangerment by the Chinese government, the WTA suspended its operations in China and Hong Kong”. This section is culled from WIKIPEDIA. https://en.wikipedia.org/wiki/Women%27s_Tennis_Association