‘The Ghana must go’ saga: Gospel truth about Nigeria’s purported deportation of Ghanaians in the 80’s 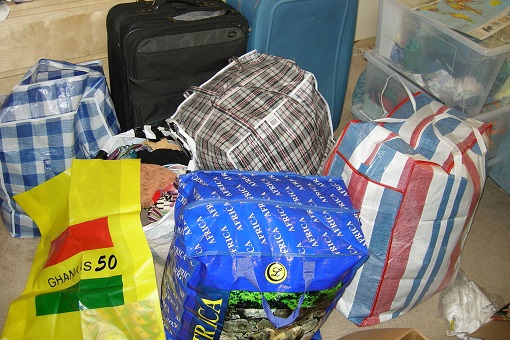 There are many things one can accuse Nigeria of, but being xenophobic is not one. Since the ugly occurrences of violence against immigrants reared its head in South Africa, a lot of uninformed political commentators especially from South Africa have refrained from calling the disturbances what they really are and proffering solutions without trying to

There are many things one can accuse Nigeria of, but being xenophobic is not one. Since the ugly occurrences of violence against immigrants reared its head in South Africa, a lot of uninformed political commentators especially from South Africa have refrained from calling the disturbances what they really are and proffering solutions without trying to justify such actions by somehow drag Nigeria/ns into the mess by accusing them of having once expelled Ghanaians.

The Ghana must go saga.

To be fair to South Africans, most are not xenophobic and are as accommodating as can be, but the minority that harbor resentment for foreign migrants are ‘loudly and proudly xenophobic’. A visit to almost any South African group or internet forums will unpleasantly introduce you to this minority. Mark you! I am not talking of the usual unnecessarily irking internet trolls found on all fora on the cyberspace.

I am talking of a largely educated group who dominate discussions on these spaces A group who would willingly sow seeds of discord amongst Africans by radicalizing moderate South Africans with all manner of untruths to stir them towards despising other Africans especially Nigerians. For these dangerous elements, xenophobia has become the new patriotism and woes betide any of their compatriots who would disagree with their killing cries!

I stumbled upon one of those ‘anti-Nigerian’ posts in a political forum of South Africans with the usual diatribe that accompanies it. The poster suggested to the audience that ‘Nigerians had no reasons to criticize South Africans for calling for deportations of immigrants because they had sometime in the 80’s deported Ghanaians from their country’. Well, this is a lame argument fashioned to justify a minority’s worrying propensity to hate and main others just because they are not from South Africa.

Yes, Nigeria deported Ghanaians and it is a historical fact that even my article cannot attempt to erase. However, Nigeria’s deportation of Ghanaians was in retaliation of an earlier thoughtless and callous deportation of Nigerians by the Government of Ghana.

It is on record that an estimated 6,500 Nigerians moved to the then Gold Coast (now Ghana) and Cotonou-Parakou in Dahomey (now Benin) to work on rail lines and in gold mines between 1900 and 1902. After the railway was completed, some of the migrants became traders, and many left for Côte d’Ivoire after World War I.

This prosperous Nigerian immigrant population rose to about 46,800 according to Ghana’s 1948 census, a number that later rose to 100,000 in 1959 following Ghana’s economic development and the country’s vigorous Pan-African movement after its independence.

At 1969 the then Ghanaian Prime Minister Kofi Abrefa Busia’s Aliens Compliance Order, expelled about 500,000 Nigerians between December 1969 and early June 1970 under the pretext of ‘failing to comply with the Ghanaian immigration laws.’ This action saw to the uprooting of almost all the established Nigeria community in Ghana.

Most returned home literarily ‘empty handed’ their dispossession and cruel expulsion by a sister West African country did not go down well with the Nigerian State at the time. Following unheeded diplomatic pressures to compensate its deportee citizens, Nigeria in a ‘tit for tat’ response, reciprocated Ghana’s inhuman gesture by deporting about 1 million Ghanaians in 1983.

Hence the falsehood about Nigeria’s deportation of Ghanaians should be called what it is, -an untruth. Nigeria has been a brotherly nation to almost all African countries sub-Sahara. It has championed the freedom of Africa and Africans spending billions in cash and an invaluable human resources for the thankless job of decolonization and peace on the continent.

The Zambians, Zimbabweans, Angolans, Congolese, Sierra Leoneans, Angolan, ANC, SWAPO, FRELIMO, etc can attest to that fact. All these selfless ventures of the Nigerian State was at the expense of the Nigerians people, but we never complain because we believe in the worthiness of those causes.

The infamous ‘Ghana must go’ saga is a sad occurrence in Africa’s chequered history and should serve as a reminder and warnings to all Africans on the need to treat each other with kindness and decency. At Ghana’s independence and econo-political dominance in west Africa, it felt it could stand alone and lost its ubuntu in the process.

Another country can still act in the manner that Nigeria reciprocated to Ghana in this decade. Any country thinking that it can maltreat others and exist alone should have a rethink. There is an Igbo/Nigerian adage that ‘farting in retaliation can yield unexpected results’. It is a known fact that ‘tit-for-tat’ diplomatic attitudes is an ill wind that blows no good. Hence confrontations (especially between South Africa and Nigeria) should be avoided. Nigeria reserves the right to counter-deport or dispossess citizens of a hostile country as a deterrence for maltreating its citizens.

Xenophobia is a problem that must be defeated and Africa has developed to a stage that we must resort to jaw-jawing to resolve issues without calling for violence and destruction all the time. As citizens of Africa, we all have our roles to play to defeat Xenophobia on the continent. The educated should teach the uneducated because they look up to their wisdom for guidance. We should never passively radicalise the ill-informed into hateful ogres. Be it in South Africa, Ghana, Nigeria, Botswana, Gabon or any other country, spreading inciteful falsehood would not solve any problems.

Every comment counts, we must not jump into bandwagons and must use the peaceful road less travelled road. Written by Sunny-Unachukwu John