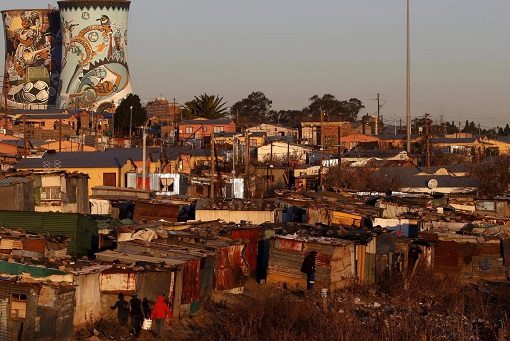 Oppression, when written about, is often reduced to one layer of suffering. Yet when one unpacks the lives and narratives of the poor it becomes clear that their struggle to survive takes place under many layers of oppression. Layer One: The History of Racial Oppression The most obvious layer of oppression is that of a

Oppression, when written about, is often reduced to one layer of suffering. Yet when one unpacks the lives and narratives of the poor it becomes clear that their struggle to survive takes place under many layers of oppression.

Layer One: The History of Racial Oppression

The most obvious layer of oppression is that of a history of colonialism, labour and apartheid. Colonialists created ‘race’ as a way of oppressing the colonized. This race construct was created on the myth of the ‘inferior other’, the primitive dark man whom the white man could tame, pacify and put to work ‘for his own good’. In South Africa the Khoi San, the San and later the Xhosa were captured as slaves and put to work on the farms of settlers and frontiersmen.

With the discovery of gold and diamonds, the settlers required labour to work the mines and those indigenous people who still lived and farmed on land were then subjugated via the 1913 land act, which effectively dispossessed black people of their land and turned them into cheap labour to be used as chattel. Thus, the next wave of slavery was born in the form of cheap labour. It is the poor black majority who still carry this historical burden as systemic damage was so deeply etched into the fabric of their society that little has changed for them.

What endures in post-apartheid South Africa is the legacy of racial classification and hierarchy – White, Indian, Coloured, and Black. This is the taboo topic that no one wants to touch because it is complex and sensitive territory. Blacks, Coloureds and Indians were historically oppressed by the white supremacist system. But within this oppression, Coloureds and Indians were given more economic privileges than Africans. This meant that Africans were at the very bottom of the social hierarchy and further ‘othered’ by both Indian and Coloured folk, most of whom, did not want to be associated with “Africans” and considered themselves to be superior.

Many myths and beliefs about blackness abound in the white imaginary, none more rife than that of the savage black male. Black men have become the monster under the bed of our society. The black male, and more specifically the poor black male, has become the scapegoat for all the woes of our country.

He is the rapist, the murderer, the tsotsi, the hijacker, the conman, the baby killer, the wife beater, the child rapist and the rapist. Whilst statistics show that more women are killed at the hands of their intimate partners in South Africa, the myth that it is a black male stranger that is more likely to kill white women, is pushed ardently by right wing and even mainstream media.

The media continues to present a biased view of South Africa and it is largely black people who are presented in a bad light via stories of corruption and criminality. The corruption of the white corporate echelon is largely overlooked.

Reporting on brutal crimes that occur in poor areas is also told in a vacuum of understanding of the dire and desperate social conditions that the poor are forced to endure. This results in a general belief that black people are naturally prone to criminal behavior and hideous cruelty.

Access to basic services can tremendously improve the burden that is placed on women. Although lack of services and sanitation affects everybody, it is women who are most affected, as they are their families’ caregivers. In poor communities where these services are absent, access to sanitation and potable water becomes the women’s problem.

The government’s promise of free basic services for all seemed like the light at the end of the tunnel for women living in informal settlements. But this promise has not materialized since privatizing basic services has become the government’s top priority. In the meantime, women in informal settlements still worry about where to do their most private ablutions and be safe from the dangers of rape and murder.

The fact that to this day three million households live without sanitation and the majority of those households are black is indicative of the value placed on black and poor bodies within this system. Yet when black bodies rise up to fight for their right to exist, for their right to basic services and sanitation, they are often brutalised by the state and its mechanisms. The so-called “poo protests” are a clear sign of the frustration of communities suffering without sanitation.

Meanwhile, the RDP housing offered to poor black people is substandard and too small for decent family living. RDP settlements are also far from places of employment and social amenities, such as hospitals. This places a terrible burden on the poor who spend hours commuting and spend far too much money on it.

Although many members of the black middle class themselves have various class layers in their own families, many well-off black people have distanced themselves from the poor in a bid to dissociate themselves from black oppression and suffering and other negative stereotypes that are associated with impoverished blacks.

The black middle class are materially comfortable and will generally not join the struggles of the poor, such as service delivery struggles and the struggle for equality. The poor feel abandoned by their own people and express that they do not see them as very different to white people.

The poor and black of South Africa largely live and function outside of the formal economy. They have virtually no access to the market place. Jobs for poor black South Africans are few and offer slave wages.

In the 90’s the GEAR macro economic policy created a situation where the working class lost their jobs in the millions and industry became capital intensive. Many people remain jobless for the duration of their lives.

Being denied access to loans or infrastructural support also sees many not being able to start their own businesses. Whole families live on grants that don’t increase in line with rising inflation, costly services and inflated food costs. In South Africa, 48% of our population live below the breadline. Of the 30% unemployed workforce, the majority are black.

Layer Eight: Influx of Foreigners and the Economic Pressure on the Poor

In the 90’s, border control lapsed and this saw many foreign national economic refugees making their way across the borders and into South Africa. This took place before black South Africans had time to recover from 300 years of brutal economic oppression. The influx of foreign nationals diminished opportunities for locals.

Suddenly locals who sought to exploit their newfound freedom to make an independent living for themselves, found themselves also competing with foreigners who had years of trading and business experience under their belts — having lived in countries liberated way in advance of South Africa.

In addition, white folk and business people from other race groups began to hire foreigners to work for them as casual labour in the building industry, as domestic workers, shop workers, gardeners and in restaurants. This was largely because they could pay less and did not have the hassle of the CCMA or labour laws, as foreigners were prepared to work for less pay and would not rebel due to their illegal status.

The poor struggle to access healthy food, as large supermarkets that are more likely to offer discounts are far from where they live. As food costs rise, the poor are less able to access proper nutrition. Hunger and malnutrition is a reality for many in South Africa. The poor are just a step away from starvation. There have already been cases of children found starved to death in rural areas.

Between the Right Wing Afrikaner and foreign owned security industry in South Africa, black South Africans are treated like unwelcome refugees in their own country. It becomes increasingly difficult for black males, in particular, to move easily through suburbs in search of work.

Even if they live in these suburbs they are treated with suspicion. Security industry personnel often stop and search black men walking in suburbs and then demand that they leave. They have their bags searched and they are made to feel like criminals.

In conservative Afrikaans strongholds black men are stopped from standing in parking lots or nearby public streets. Black people, especially men, are racially profiled and treated like criminals or potential criminals in their own land. It is they who feel that they do not belong in this land that has been recolonized by white people from all over the world who then spend a lot of money on security in order to keep black people out.