Ukraine War: Putin will win, despite the best efforts of the US. 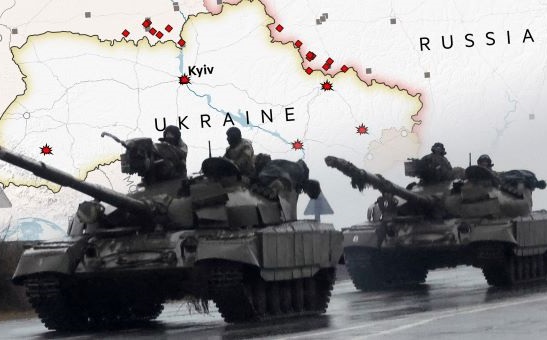 It is only a matter of time, Ukraine will eventually fall to the superior fire power of Russia. Ukraine are probably war weary, having been outgunned and bombarded continuously on all front. The Ukrainians cannot withstand the intimidating military war-chest of the Russians for much longer. The Ukrainian forces will eventually be overrun by the

It is only a matter of time, Ukraine will eventually fall to the superior fire power of Russia. Ukraine are probably war weary, having been outgunned and bombarded continuously on all front. The Ukrainians cannot withstand the intimidating military war-chest of the Russians for much longer. The Ukrainian forces will eventually be overrun by the continuous onslaught of the Russian army. Ukraine is only a pawn in the political chess game between the West and Russia. The west only wants to use Ukraine as an instrument to curtail the excesses of Putin and really don’t care much about the people of Ukraine.

WHO WANTS IT MORE? PUTIN, UKRAINE OR THE WEST.

Russia has put forward some justifications for its invasion of Ukraine. It is claiming that the movement of former Soviet republics and communist countries into NATO’s jurisdiction as an existential threat to its national security. The Kremlin have accused NATO of reneging on the agreement not to expand its military presence in its areas of influence. However, the trans-Atlantic military pact has expanded eastward, into former Warsaw Pact nations like Poland, Romania and Bulgaria. It has even gone so far by entering into pacts with former Soviet Union states such as Lithuania, Estonia and Latvia.

Ukraine has never hid its desire of becoming a member of NATO and the EU. This is a source of provocation for Russia as it desperately wants to keep Ukraine in its sphere of influence. Putin believes Ukraine is very strategic to Russia’s interest. Russia believes the two countries share deep historical and cultural ties. Russia civilization can easily be traced back to Kyiv, the capital of modern-day Ukraine

Secondly, Putin sees Ukraine as part of Russia. He once referred to Ukraine as “Little Russia”. He believes Ukraine is an illegitimate country that exists and claims that Ukraine didn’t exist as a separate state, instead it had always been an integral part of a triune nationality: Russia, Belarus and Ukraine.

Putin plans to establish a Eurasian Union — a powerful economic and political bloc encompassing the countries in the former Soviet Republic like Ukraine, Latvia, Belarus, Georgia and Lithuania. Ukraine is vital to this plan because of its size, historical links with Russia and its location on the EU’s border. Without Ukraine, there is no Eurasian Union.

Putin fears that Ukraine, perhaps its most strategic neighbour is moving closer to the West. He hates the fact that Ukraine is growing too close to NATO and developing strong ties with the EU.  In addition, a democratic and liberal Ukraine will be considered to be pro-West by the authorities in Russia.  A democratic Ukraine with features such as free speech, rule of law, and free media will provide the people with the freedom of choice to elect their leaders in free and fair periodic elections. The opposite is the case in Russia as Russians do not enjoy such freedoms. If Russians then see this as a template and follow Ukraine’s example, this will mark the beginning of the end for Putin.

Recently, Putin compared himself to Peter the Great, Russia’s first emperor, in a bid to justify his invasion of Ukraine. He drew a parallel in what he portrayed as their twin historic quests to win back Russian lands. The 18th-century Russian tsar Peter the Great waged the great Northern War for 21 years — an expansionist war some three centuries ago.

Given all this, it is only a matter of time, Ukraine will eventually fall to the superior fire power of Russia. Ukraine are probably war weary, having been outgunned and bombarded continuously on all front. The Ukrainians cannot withstand the intimidating military war-chest of the Russians for much longer. The Ukrainian forces will eventually be overrun by the continuous onslaught of the Russian army.

Ukraine is only a pawn in the political chess game between the West and Russia. The west only wants to use Ukraine as an instrument to curtail the excesses of Putin and really don’t care much about the people of Ukraine. The West will not stick her neck for Ukraine in the long term. Putin knows this. Thus he is willing to play the waiting game.

WHY PUTIN WILL WIN?

The Russian economy has performed surprisingly well in the face of Western sanctions designed to cripple it. The Russia’s ruble has outperformed the dollar and other currencies to become the world’s best performing currency so far this year. The soaring oil prices have also become a blessing to Russia. The Russian economy is holding up high in the face of sanctions. The question on every one’s lips is how long will this last.

It is an irony that it is the rest of the world that is experiencing, stagflation, inflation, chaos and possible recession. The war in Ukraine is having devastating effects on the economies of countries around the world. A global food crisis is imminent with the soaring cost of food items in different parts of the world. Russia and Ukraine are some of the notable food basket of the world. The war has led to a disruption in the production and supply chain of food from these countries to other parts of the world.

Now Biden wants an oil price cap to allow the Russian crude into the world market to prevent possible global economic meltdown. This novel strategy by the Biden administration will allow Russia to trade its oil in the world market, albeit at a lower price. This will prevent a catastrophic price surge but without excessively profiting Russia. However, skyrocketing oil prices means that Russia can profit from the windfall by selling to countries willing to ignore sanctions.

The Russian military forces in Ukraine are also getting better by the day. They have gotten over their initial failures. They have become more determined, resilient and systemic in the battle with Ukraine as they have adopted a scorched earth policy of destroying everything in its path as they march from one conquest to the other. This renewed strength and vigor of the Russian forces is at the detriment of an already weak and decapacitated Ukrainian forces.

HOW THE WHOLE INCIDENT WILL PLAY OUT.

As the configuration of the war is taking shape, it is easier and clearer to prognosticate its eventual outcome. Gazing into the crystal ball, one can foretell that the outcome of the war will be in favour of Putin. Russian forces will gain more ground and make significant in-roads into other Ukrainian cities. Sooner or later Ukraine will fall like a pack of cards to the superior and formidable fire power of Russia.

Ukraine’s military capabilities are no match with that of Russia. Putin will capture all of the Eastern and Southern Ukraine. Putin will also make missile incursion into Kyiv and the West of the country. He will then force some form of ceasefire by enjoining Kyiv cede all the captured territories to Russia. The West that will have become “war weary” in some months or years and in trying to avoid a nuclear confrontation with Putin will force Ukraine to sign a ceasefire of some sort to keep the peace.

This is a zero-sum game. In all of this, it is Ukraine that have everything to lose — the defeat, shame, humiliation, loss of territory, loss of national pride, destruction to infrastructures and buildings. At the end, Ukraine will be a scapegoat in the rivalry between Russia and the West.

After this war, the configuration of the international system will be altered. The world order will somewhat change and we will move on till the next Russian aggression, but not necessarily from Putin.

WHAT ANSWER DO WE HAVE TO THE RUSSIAN MENACE?

The West (the US, NATO and EU) must find a peaceful way of keeping an aggressive Russia in check. The excesses of Putin and indeed Russia should be curtailed to prevent a possible nuclear apocalypse. The victory in Ukraine will further emboldened and encourage Putin to replicate the feat elsewhere. He once flexed his muscles in Georgia, Chechnya, Syria, before turning to Ukraine. He can always do it all over again. Putin is on rampage.

The West should seek ways to tame Putin. This is necessary to check his expansionist drive and a possible nuclear winter.  The West can try to break up Russia as it happened to the Soviet Union with the subsequent reduction in nuclear confrontation. Russia is the largest country in the world by land mass. Maybe, the West should try all it can to break up this huge behemoth. This will mark the extinction of Russia, just as it happened to the Soviet Union. But this will come at a cost and it seems Putin is still in control of things as of now.

Allowing Russia to somewhat continue its drive to embrace a lost glory it still seeks could prove fatal and devastating to international peace and security. Adolf Hitler of Nazi Germany started out the same way. We can’t afford another World War (Third World War). The ongoing Russo-Ukrainian war is already having terrible effects in the global economy. How much more will be the consequences and fatalities of a global war. The preservation of international peace and security is sacrosanct. No personal interest of a megalomaniac individual or the parochial national interest of a country should be allowed to override that of the entire international system.

In conclusion, Putin’s Russia or one with a new czar will probably continue to be in opposition to Western ideals and agenda. The two (The West and Russia) are miles apart on what the world order should be. There is also a fundamental desire of Russia to capture lost glories and again become reckoned with on the world stage. Despite the fact that Russia wants to punch above its economic weight class, the fact still remains the country has the most stock pile of nuclear arsenal – and the true meaning of what that means should not be lost on anyone.