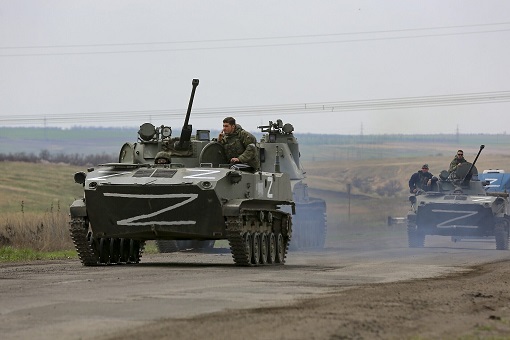 Russian military bombardment has intensified unabatedly from Tuesday 19/4/22, in the Eastern part of Ukraine. This comes as western countries vow to support Ukraine with more arms and money after Russia launched a full-scale ground offensive to completely take control of Ukraine’s east. War in Ukraine: Russia focuses on Ukraine Eastern front. Ukrainian officials have

Russian military bombardment has intensified unabatedly from Tuesday 19/4/22, in the Eastern part of Ukraine. This comes as western countries vow to support Ukraine with more arms and money after Russia launched a full-scale ground offensive to completely take control of Ukraine’s east.

Ukrainian officials have described the war as the Battle of the Donbas, stating, Ukraine soldiers were fit enough to overcome the assault. Meanwhile, President Volodymyr Zelenskyy in a video conference pledged to fight back, “No matter how many Russian troops they send there, we will fight. We will defend ourselves.”

Ukrainian military has noted an intense increase of assault in Luhansk and Donetsk regions and also in the area of Zaporizhzhia. Secretary of Ukraine’s national security council, Oleksiy Danilov, stated. “This morning, almost along the whole front line of the Donetsk, Luhansk and Kharkiv regions, the occupiers attempted to break through our defenses. Fortunately, our military is holding out. They passed through only two cities. This is Kreminna and another small town.  We are not giving up any of our territories.” He added.

Despite the optimism, Ukraine officials has however noted that the new phase of war had led to the capturing of Kreminna, which happens to be an administrative center of 18,000 people in  the region of luhansk, which is one of the two Donbas provinces. Luhansk regional governor, Serhiy Gaidai, stated,  “Russian forces were attacking “on all sides”, authorities were trying to evacuate civilians and it was impossible to tally the civilian dead”.

This offence has resulted in civilians becoming trapped amidst the bombardment from all front. Ukrainian officials have thus urged civilians to evacuate areas  that were  expected to experience intense assault by the Russian troops. Unfortunately, no evacuation corridor could be reached with Moscow as officials admitted that an attempt to process a safe passage had failed.

With the change in tactics by Moscow and the commencement of the new phase, president Joe Biden and other western leaders have thus deliberated on ways to hold Russia accountable for all the disasters in Ukraine. They also in the same vein pledged to increase economic, military and humanitarian support for Ukraine.