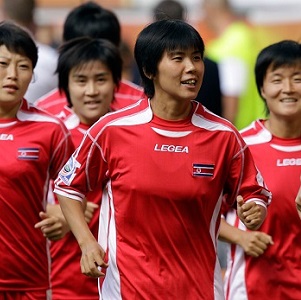 Why North Korea female excels at football than the male.

In fact, before the 2010 FIFA World Cup which graciously held in South Africa, the last time North Korean men’s team competed with some of the world’s most peculiar teams was 1966 – when they achieved a remarkable 1-0 victory over Italy, and progressed to the quarterfinals. Since then, the team has garnered little attention and this explains the reason for their seclusion in world modern football affairs.

Despite being without official kit providers for their male team since 2014, North Korea has done well to build the momentum of their female team – ensuring that they remain in top form, compete with other countries’ women’s teams and scoop as much awards as is possible.

The country’s women’s teams have continued to heap glories upon the acclaimed self-reliant socialist state; but the secret or vital ingredient behind their numerous successes in recent times is none other than the masculinization of the women’s team.

That desire to become well-recognized in the world of football years ago had given birth to several ideas and techniques – which are, today, employed by the North Korean Football Association for the promotion of their women’s team.

Ordinarily, in terms of skills, physique and performance, women’s football has major limitation compared to their with men folk. Merely approaching the performance standards of men’s football can yield very good results in women’s football – but North Korea had been investing so much to help transform their women into some kind of macho-men  through diverse rigorous trainings.

Even in a poor environment, the unearthing of good players in women’s soccer and the enhancement of performance level through tough trainings similar to those for men are the reasons for North Korea’s women’s football success.

This is what they do in the East Asian country: when one enters middle school, students whom are passionate about football and exhibit promise in the field are selected and trained to gain basic abilities in the soccer club.

Amongst them, student-players who excel are then temporarily transferred to bigger cities so as to undergo more intensive trainings. From then on, these students attend soccer clubs instead of school, and only learn the craft of playing football.

And if any of them displays excellent technique and capacity at the club, they can be chosen for North Korea’s, that is, the country’s distinguished representative teams like the April 25 Team, Yalu River Team and Lee Myung Su Team.

Eventually, when these North Korean ladies are pitched out for international competitions, the ladies practically play with bullies. But this technique wouldn’t yield as much positive result when applied on their male teams, because men – as the name implies – are naturally or artificially six-packed, heavily-chested and masculine. They wouldn’t be easily swayed by the appearance of their opponents – and if you ask those Asians who end up fighting karate on our football fields, they would confess they have attracted no positive result using their style.

Football experts say that the strength exuded by North Korean women’s football team is a strong physical and mental capacity. This kind of power is capable of relegating any other lady – especially because ladies are naturally known to be fragile beings and inferior strength-wise to their male counterparts.

Regardless of the seclusion of North Korean national team in world football affairs, it suffices to note that the country’s women’s team would remain a powerhouse to contend with in the coming years.