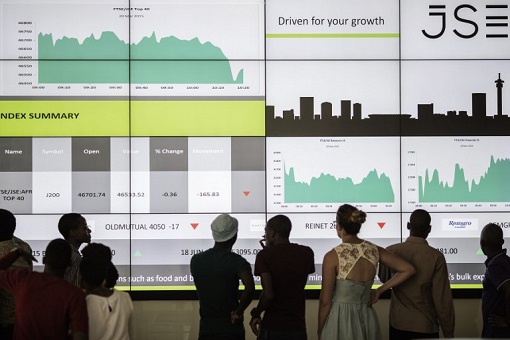 When the president’s estimates of the share of the Johannesburg Stock Exchange (JSE) owned by black people jumped from 3% to 10%, a South African commentator took notice. “Something rings wrong,” Allan Greenblo, editorial director of retirement publication Today’s Trustee, stated.In response to the debate on his 2015 State of the Nation Address, President Jacob

When the president’s estimates of the share of the Johannesburg Stock Exchange (JSE) owned by black people jumped from 3% to 10%, a South African commentator took notice.

“Something rings wrong,” Allan Greenblo, editorial director of retirement publication Today’s Trustee, stated.
In response to the debate on his 2015 State of the Nation Address, President Jacob Zuma claimed that “the black majority still owns only 3% of the Johannesburg Stock Exchange, pointing to the need to move faster to achieve meaningful economic emancipation.

We have called for radical economic transformation”.
Two years later, in his 2017 State of the Nation address, Zuma said that “only 10% of the top 100 companies on the Johannesburg Stock Exchange are owned by black South Africans”.

“There must have been a giant leap during a short period, or the NEF’s methodology has changed,” said Greenblo.
It turns out neither scenario is true.
Back-and-forth on black-owned numbers

Estimates of black-ownership of the JSE have been controversial and debate about them has eaten up significant inches in both newspapers and online publications.

Let’s start at the beginning. In 2015, the presidency, NEF and the JSE had a kerfuffle over how much of the JSE was black-owned. (Note: In the South African context, “black” includes African, coloured or Indian people as defined by the broad-based black economic empowerment act.)

After Zuma had pegged the number at 3%, the JSE released a contradictory statement, saying “black South Africans hold at least 23% of the top 100 companies listed on the Johannesburg Stock Exchange”.

Zuma’s then spokesman, Mac Maharaj, defended the 3% figure. He said it was calculated by the NEF which relied on research conducted by Who Owns Whom, an “independent research organization producing original research on the African business and economic environment”.

Jaws dropped when the JSE then released another statement saying they agreed with Zuma’s figure: “Insofar as the direct investment that black South Africans hold in listed entities on the JSE, we roughly concur that the holding is 3%. When direct and indirect holdings are included as a value of the top 100 listed entities on the JSE, the figure is 23%.”
How did the JSE calculate 23%?
For a number of years, the JSE released estimates of ownership of the stock exchange’s top 100 companies. Their last figures were released in 2015 and provided information on the breakdown of ownership at the end of 2013.

Media and internal communications manager at the JSE, Pheliswa Mayekiso, told Africa Check that they would not be publishing further black ownership statistics.

The analysis was conducted for the JSE by black economic empowerment advisory group Alternative Prosperity. The company analyzed the top 100 companies listed on the stock exchange, using data from the JSE, financial market information providers and a large number of investors.

Alternative Prosperity did not manage to determine the racial ownership of all the shares in the JSE’s top 100 companies.

“The research process is extremely work-intensive and time-consuming, including the need to go through thousands of ownership records… which are cross tabulated with other documents to obtain certainty about race profiles of investors,” the JSE explained in a 2013 press release.

Number of ways to identify race
Trevor Chandler, from Trevor Chandler and Associates, oversaw the research conducted by Alternative Prosperity for the JSE. He said that various methods have been used by different organizations to determine the race of JSE

shareholders:
Counting BEE deals. The first – and “probably the easiest”, according to Chandler – is to look at big black economic empowerment (BEE) deals on the listed share register and assume that all those shares are held by black people.

“This approach however does not tell the full story because often those BEE share deals are done at subsidiary level with a South African asset and not at group level,” he explained.

“So you have to go to a fair amount of effort to figure out what percentage of the company is held in those BEE deals.”
Judging surnames. A second, “tempting” way would be to go through the share register and determine share ownership based on people’s surnames.

This method has obvious flaws and was not used by Alternative Prosperity.
Comparison with other data. The JSE’s researchers used a third approach that involved obtaining information such as certificates on BEE deals, both at group level and at subsidiary level, said Chandler.

Chandler said the team also collected additional information, including pension fund, unit trust and life insurance policies data. This data was then compared to share registers where shares were held in these institutions’ names.
“Then you can piece those two together and figure out absolutely clearly what the total black participation on the JSE is,” explained Chandler.

He said that this was quite a difficult process to do for the whole JSE, however. To overcome this, the JSE’s researchers analyzed the biggest institutions and pension funds first.
What was left, remained unanalyzed, although Chandler said each time the research was done they attempted to reduce this portion.

“To my understanding, our research is the only research that has all the information in terms of the share registers and the pension fund data.”

Zuma also referred to the percentage of the stock exchange being “owned” by black people in both cases. It’s a term which the NEF has used themselves on many occasions.

But the technical term used by the NEF is not “ownership” but companies that are “black-controlled and managed”. It turns out they are very different things.

NEF: Do black people control a company?
Let’s go back to the 3% estimate which grabbed headlines in 2015.
Head of marketing and communication at the NEF, Moemise Motsepe, told Africa Check that they had last calculated the percentage of the JSE that is black controlled and managed in May 2017. It still stood at 3%.

The NEF calculated the estimate themselves using Who Owns Whom’s data and methodology, Motsepe said. Who Owns Whom was not involved in conducting the research or calculation, however.

The methodology consists of “examining the shareholding and shareholding spread as well as the board of directors for each company”. This was done “to establish which shareholder or group of shareholders acting in consort have voting control and therefore control the management of the company and consequently its cash flow”.

“The key difference in our analysis is that we ask ‘are you in control [of the company]?” Motsepe said.
If the controlling shareholders of a company were black, the total value of that company was considered black-controlled and managed in the NEF’s analysis.

This means that if black shareholders in a company owned less than the NEF’s threshold for control, the value they held was not included.
The NEF conducted its analysis on the whole JSE, as they view it as a proxy for the South African economy. But their analysis stopped at black control.

“The primary interest of the NEF… is to measure black ownership of the economy. Therefore the NEF has not sought to analyze the comparative shareholding of [other] categories,” said Motsepe. This includes control by white people or foreign investors.

Who Owns Whom also produces an annual summary of JSE total market capitalization control. In 2015, they estimated that 0.6% of the total JSE was black-controlled.

Despite using the same methodology to assess the same sample of the JSE, the NEF could not explain to Africa Check why their estimate of 3% differed from Who Owns Whom’s.

Debate on the share of the JSE held, owned, controlled or managed by black people will no doubt continue for years to come. For the public to understand the numbers, transparency on the methodologies used to calculate the estimates is vital.

What about Zuma’s latest figure of 10%?
Zuma was wrong when he claimed in his 2017 State of the Nation address that “only 10% of the top 100 companies on the Johannesburg Stock Exchange are owned by black South Africans… according to the National Empowerment Fund”.

When Africa Check asked the NEF for the research Zuma’s claim was based on, they sent the organization’s 2017 submission to parliament’s standing committee on finance.

10% = target
The submission made no reference to black-ownership of the JSE equaling 10%.
“The study shows that the financial service sector companies have achieved an average of 6% against the direct equity target of 10%,” the NEF told Africa Check by Kate Wilkinson.