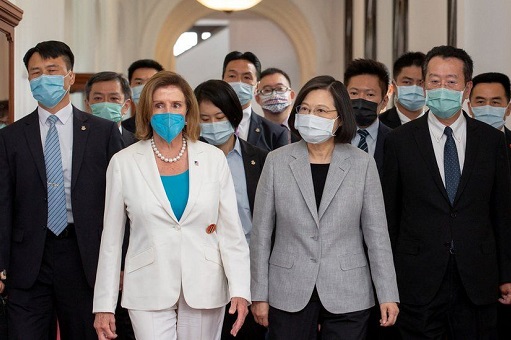 Nancy Pelosi’s visit to Taipei the capital of Taiwan marks the first time a US top government official has visited the island in 25 years since the visit of then House Speaker, Republican Newt Gingrich, 25 years ago.  Xi Jinping, President of the People’s Republic of China warned the US of serious consequences should Pelosi

Nancy Pelosi’s visit to Taipei the capital of Taiwan marks the first time a US top government official has visited the island in 25 years since the visit of then House Speaker, Republican Newt Gingrich, 25 years ago.  Xi Jinping, President of the People’s Republic of China warned the US of serious consequences should Pelosi visit Taiwan. The US condemned the rhetoric from Beijing, insisting the visit of the US House Speaker need not increase tension between the two super powers. It then begs the question why Nancy Pelosi insisted on visiting Taiwan thereby heightening tension between the US and another super power, especially when Washington is still enmeshed in a proxy war with Russia in Ukraine?

HISTORY OF THE DISPUTE RELATING TO TAIWAN AND WHERE THE US COMES INTO THE PICTURE.

The history of the ties between China and Taiwan can be traced back thousands of years. The Austronesian tribal people are the first known settlers in Taiwan and it is believed they migrated from modern day southern China. It seems Taiwan first appeared in Chinese records in AD 239 when an emperor commissioned an exploration mission to the island.

Following a fairly short stint as a Dutch colony (1624-1661), Taiwan was overseen by China’s Qing dynasty from 1683 to 1895. And in the 17th Century, a significant number of immigrants from China started relocating to Taiwan to escape the hardship and unrest back home.

Japan won the First Sino-Japanese War in 1895. Consequently, the Qing dynasty had to surrender Taiwan to Japan. But in 1945, after the Second World War, Japan unconditionally relinquished the control of the island after her defeat in the second world war. Taiwan as a territory was put under the administrative control of the government of the Republic of China by the United Nations Relief and Rehabilitation Administration. Therefore, China started ruling Taiwan with the consents of the United States of America and the United Kingdom.

However, the defeat of the Chiang Kai-shek led Kuomintang government by Mao Zedong’s Communist army in 1949 forced the government of China and their supporters (about 1.5 m people) to relocate to Taiwan to declare the establishment of a new Chinese state – the People’s Republic of China.

Chiang Kai-shek led the government in exile for the next 25 years. His supporters that came with him from China are referred to as Mainland Chinese and they dominated Taiwan’s politics for many years despite been minority on the island.

The recent visit to Taiwan by the Speaker of the US House of Representatives, Nancy Pelosi has spiked tension in the acrimonious China-Taiwan relations. Nancy Pelosi had embarked on a tour of Asia. She also visited Singapore and Malaysia. She also stopped over in South Korea and Japan. Although Taiwan is not on her itinerary, she visited the island as part of her recent tour of Asia. China thereafter responded with military drills that is staled as a precursor scenario to a full invasion of Taiwan.

For years, the US has maintained a policy of ‘strategic ambiguity’ in the face-off between China and Taiwan. The US has long walked a silky middle path with the one China policy — recognizing Beijing as the sole legitimate government of China, while still maintaining a close informal relation with Taiwan. The US supplies military equipment to the island in accordance with the 1979 Taiwan Relations which is deliberately vague on whether Washington would defend Taiwan in the event of a Chinese invasion. Taiwan is a highly advanced economy producing an estimated $786 billion in goods and services in 2021. The United States and Taiwan have deep and growing commercial, financial, and trade ties, which advance U.S. interests and help create economic opportunities in the United States.

The recent visit of Nancy Pelosi to the island has further heightened the ambivalence of the US on the tension between China and Taiwan. It appears the US is speaking from both sides of the mouth.  The US National Security Coordinator John Kirby has reiterated the US’s “One China” policy. He said the US does not support “Taiwan independence” amid the reports of US House Speaker Nancy Pelosi’s visit to Taiwan. He went further by saying: “We are clear that nothing has changed about our one China policy which is guided by Taiwan Relations Act. We do not support Taiwan’s independence,”

Earlier the US President Joe Biden had said he would be willing to use force to defend Taiwan. This comment by President Joe Biden has been seen as a break from the US ‘strategic ambiguity’. In a related development some U S lawmakers have been urging President Joe Biden to take a more decisive stance on Taiwan. In a rare display of solidarity in Washington, both Democrats and Republicans on Capitol Hill are in support of Nancy Pelosi’s visit to Taiwan. Of recent, more US House members have also visited Taiwan despite the military posture of China.

In 2017, the Trump administration approved $1.4 billion of arms sales to Taiwan. This generated a lot of fury from China. In March 2018, President Donald Trump approved the bill that encourages the United States to send senior officials to Taiwan to meet Taiwanese counterparts and vice versa. Again, this didn’t go down well with China. In September, the same year the United States approved the sale of military aircrafts worth $330 million to Taiwan. China reacted by warning the United States that this threatens the relations between the two countries. The back and forth between China and the US over the Taiwanese independence have been a mix bag over the decades.

WHY WOULD NANCY PELOSI VISIT TAIWAN AT A TIME LIKE THIS?

One will be the US desiring a bargaining chip and thus showing Xi Jinping it might renege on previous policy of keeping the “One China Principle” which Beijing insist the rest of the world must adhere to in matters relating to Taiwan. (That is if China assist Moscow and supplies Putin with drones and military arsenals which Russia now desperately needs, the US will also poke around with the Taiwan’s “one country one principle” which Beijing holds dear. The visit of Nancy Pelosi to Taiwan further amplify the saying that there is no smoke without fire. The Ukrainian war cannot be divorced from the visit and the diplomatic brouhaha it is generating between the United States and China. The United States will thus go to any length to deter China from becoming an ally of Russia in the war in Ukraine.

Also, Nancy Pelosi’s desire for a bargaining chip to force better humanitarian uprightness by Beijing in its territory informed her decision to visit Taiwan and thus unfortunately upset the delicate balance when it comes to the “One China Principle” in Taiwan which previous administrations have maintained since the emergence of China as a dominant super power. Her calculation might be to force Beijing to thread softly in order to keep enjoying the status quo of the “One China” policy of the United States.

She also might want to put her name out there given this might be her last stand as a US House Speaker due to the possibility of a Republican takeover of Congress in the mid-term.

It must be noted the weakness of the Biden administration in reining in a member of his party from creating possibly further tension in the world, especially at a time when Beijing is yet to accede to Putin’s demand for killer drones for use in Ukraine. The visit of Nancy Pelosi to Taiwan yet again bring to the fore President Joe Biden’s flaws as a leader. He could have stopped the visit. The world do not need further strain in the supply chain. One which a China-US dispute over Taiwan will bring.

Beijing will not (without a life and death scenario) face the US in a war scenario.  There will be no winner and no loser in such a situation. Rather, China will increase its aggression against Taiwan and possibly use the opportunity to invade, capture and reintegrate Taiwan back into China, given the US might be less willing to fight a proxy war on two fronts against significant foes. The escalation of diplomatic tension could eventually result in China invading Taiwan. However, this is just one of the possibilities. Different outcomes could also play out.

China will make the right noises and wait for a situation in the future wherein the US requires its help and then show disdain or act against US interest. This is against the backdrop that China is the second largest economy in the world and a permanent member of the United Nations Security Council amidst other accolades, making it a very important and strategic factor in the foreign policy of the United States now and in the future.

Also, Beijing can further cement its position in BRICS to weaken the US dollar by strengthening the Yuan as an alternative reserve currency and thus further influence China’s position in the world economy and increase its own power economically to supersede that of the US. This will be a thorn in the flesh of the United States as it doesn’t want any other currency to significantly rise against the greenback. Will this result in China overtaking the United States as the dominant economy in the world?

WAYS TO DOUSE TENSION BETWEEN THIS TWO-RANGING BULL.

President Biden should visit China in the immediate future and assure Xi Jinping the US do not intend to heighten tension with China. The US could also throw China a bone by not supplying Taiwan with more military hardware for the foreseeable future.

The US should as a matter of principle begin to respect these nuclear power states’ sphere of influence. The world is still grappling with Washington’s miscalculation in pitching an ill prepared Ukraine into a needless war with Russia. The same should not be made with this China/Taiwan palaver. The US should not drag the rest of the world into a third world war without our consent. The possible Chinese invasion of Taiwan coupled with the ongoing Ukraine war could serve as precursors to the outbreak of the Third World War. Therefore, the United States should handle the unfolding tension with China over the recent visit of Nancy Pelosi to Taiwan with tact and utmost caution. The world cannot afford the outbreak of another world war. The consequences will not only be devastating but also deep-rooted.

Beijing is presently pissed by the visit to Taiwan of Nancy Pelosi. Biden should hence forth dial back the crazy. The world cannot take on another economic meltdown which a conflict in Asia will further create. The time to jaw-jaw and not war-war is now.  The onus is on the US president to use his good office to douse the tension between the United States and China over the recent visit of Nancy Pelosi to Taiwan. Anything short of this  could be inimical  to global peace and security.