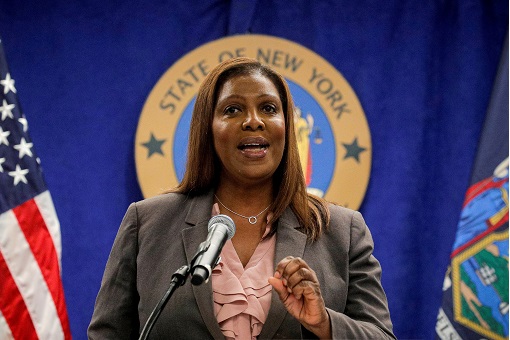 The New York Attorney General, Letitia James, has filed a motion to dissolve a lawsuit from Donald Trump pursuing to block her office from going into investigation, to properly investigate his business allegations of inflated wealth. Letitia James, calls out Donald Trump. The attorney general who described Donald Trump’s attempt to clog her probe “as

The New York Attorney General, Letitia James, has filed a motion to dissolve a lawsuit from Donald Trump pursuing to block her office from going into investigation, to properly investigate his business allegations of inflated wealth.

The attorney general who described Donald Trump’s attempt to clog her probe “as nothing but a baseless and meritless collateral attack”.

According to her, “In the three years that we have been conducting this investigation, the Trump Organization and its principles have never challenged the legality of the investigation, until now, when Mr. Trump himself was subpoenaed to testify”.

The attorney general’s office has accused Donald Trump’s family and New York-based Trump Organization of “fraudulent or misleading” practices, including repeatedly misrepresenting the value of assets, “to obtain a host of economic benefits, including loans, insurance coverage, and tax deductions.”

Charges are yet to be filed, but the latest fillings she made on the 18 January marked  the most detailed account yet following long-running allegations involving the Trump Organization and his family.

However, her office has asked the court to compel testimony from Donald Trump’s daughter, Ivanka Trump and his oldest son Donald Trump Jr. In a way the Trumps have sought to rescind subpoenas in regards to their testimony, accusing Ms. James of launching a political witch hunt, and have sued her office in Federal court in an effort to put an end to the investigation.

According to a spokesperson for the Trump Organization, “She defrauded New Yorkers by basing her entire candidacy on a promise to get Trump at all costs without having seen a shred of evidence and in violation of every conceivable ethical rule.”

According to Ms. James on Wednesday stated that, “her office will not be deterred by frivolous lawsuits” and will “continue to follow the facts of this case because no one is above the law.”

Her filing notes that since the beginning of the years-long probe, the former president and associates have been issued “multiple orders” for documents and testimony, which have produced more than 900,000 documents and brought in more than a dozen current and former employees – none of which has been blocked by Mr. Trump.

The filing state’s, “At no point, despite having ample opportunity to do so in the [proceedings], did the Trump Organization or Mr. Trump ever challenge the underlying legal basis” for the investigation or Ms. James’s authority, the filing argues.

Plaintiffs are state-court losers seeking to collaterally attack final, appealable orders” from the court, she writes.

However, it must be noted that the Trumps had refused to comply with subpoenaed by New York’s top prosecutor in fraud probe earlier this month.

Letitia James born October 18, 1958 is an American lawyer, activist, and politician. She is a member of the Democratic Party and the current Attorney General of New York, having won the 2018 election to succeed appointed Attorney General Barbara Underwood. She is the first African-American and first woman to be elected to the position.

Born and raised in Brooklyn, James obtained her J.D. degree at Howard University in Washington, D.C., after graduating from Lehman College in The Bronx. She worked as a public defender, then on staff in the New York State Assembly, and later as an New York State Assistant Attorney General (Brooklyn Regional Office).

New York City has been described as the cultural, financial, and media capital of the world, significantly influencing commerce, entertainment, research, technology, education, politics, tourism, dining, art, fashion, and sports, and is the most photographed city in the world. Home to the headquarters of the United Nations, New York is an important center for international diplomacy, and has sometimes been called the capital of the world.

Situated on one of the world’s largest natural harbors, New York City is composed of five boroughs, each of which is coextensive with a respective county of the state of New York. The five boroughs—Brooklyn (Kings County), Queens (Queens County), Manhattan (New York County), the Bronx (Bronx County), and Staten Island (Richmond County)—were created when local governments were consolidated into a single municipal entity in 1898. The city and its metropolitan area constitute the premier gateway for legal immigration to the United States.

As many as 800 languages are spoken in New York, making it the most linguistically diverse city in the world. New York is home to more than 3.2 million residents born outside the United States, the largest foreign-born population of any city in the world as of 2016. As of 2018, the New York metropolitan area is estimated to produce a gross metropolitan product (GMP) of nearly $1.8 trillion, ranking it first in the United States.

If the New York metropolitan area were a sovereign state, it would have the eighth-largest economy in the world. New York is home to the highest number of billionaires of any city in the world”. This section is culled from WIKIPEDIA. https://en.wikipedia.org/wiki/New_York_City