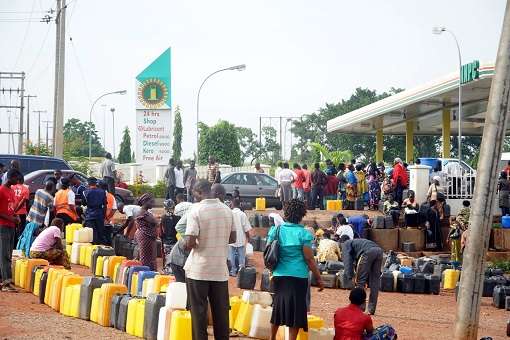 Nigerians are not finding it funny anymore as fuel scarcity lingers further into the second week of February. Some Nigerians have expressed their anger at the scarcity through their social media accounts to express their frustration over the scarcity. In some parts of Lagos and Abuja, long queues were spotted as motorists queued at filling

Nigerians are not finding it funny anymore as fuel scarcity lingers further into the second week of February. Some Nigerians have expressed their anger at the scarcity through their social media accounts to express their frustration over the scarcity.

In some parts of Lagos and Abuja, long queues were spotted as motorists queued at filling stations, leading to heavy traffic jams. The scarcity has also led to the unavailability of commercial vehicles in some areas leaving passengers stranded on the road.

It could be recalled on Monday that the IMF, had insisted on fuel subsidy removal, stating there should be compensation for the poor and transparent use of resources.

@Olubankoleidowu “We are finished! This fresh fuel scarcity is reminding us of what decision we should make come 2023. Nigerians be wise. God will not come down from heaven to fight your battles that was why he gave you brain”

“After data na fuel. Nigerians can hardly do without these products.”

@solaceomolaiye “The rate of hold-ups in Abuja is becoming alarming amidst PMS Scarcity, is like we are having illegal migrants from Lagos into Abuja”

@abrahamgreat tweeted, “To be experiencing Motor spirit scarcity in one of the largest OPEC countries is one more proof that Nigeria is not designed for the citizens but for a sect of men who lack empathy, vision, and strategy to transform anything.

“There is HOPE. This country shall be BUILT.”

Dating back to 2010, Nigerians had suffered from crippling fuel scarcity during festive periods despite assurance by various government agencies and officials that the crisis will be abated. One hopes the current scarcity will be over in no time.

“The economy of Nigeria is a middle-income, mixed economy and emerging market, with expanding manufacturing, financial, service, communications, technology and entertainment sectors. It is ranked as the 27th-largest economy in the world in terms of nominal GDP, and the 24th-largest in terms of purchasing power parity.

Nigeria has the largest economy in Africa. The country’s re-emergent manufacturing sector became the largest on the continent in 2013, and it produces a large proportion of goods and services for the region of West Africa. In addition, the debt-to-GDP ratio was 16.075% as of 2019.

Nigerian GDP at purchasing power parity (PPP) has almost tripled from $170 billion in 2000 to $451 billion in 2012, though estimates of the size of the informal sector (which is not included in official figures) put the actual numbers closer to $630 billion. Subsequently, the GDP per capita doubled from $1400 per person in 2000 to an estimated $2,800 per person in 2012.

Again, with the inclusion of the informal sector, it is estimated that GDP per capita hovers around $3,900 per person.] The country’s population increased from 120 million in 2000 to 160 million in 2010. The GDP figures were to be revised upwards by as much as 80% (percent) when metrics were to be recalculated subsequent to the rebasing of its economy in April 2014.

Although oil revenues contributed 2/3 of state revenues, oil only contributes about 9% to the GDP. Nigeria produces only about 2.7%(percent) of the world’s oil supply. Although the petroleum sector is important, as government revenues still heavily rely on this sector, it remains a small part of the country’s overall economy”.

This section is culled from WIKIPEDIA.