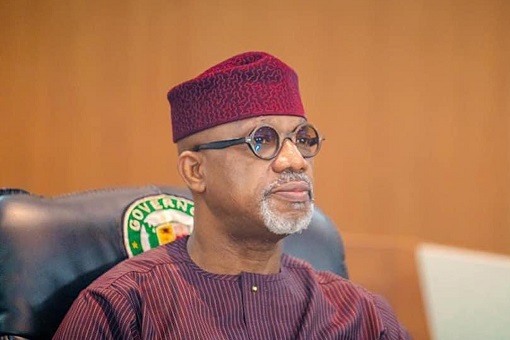 On Thursday, President Muhammadu Buhari revealed that the Federal Government is taking into consideration giving the go-ahead for the reconstruction of some federal roads in Ogun State by the Nigeria Petroleum Company and other companies under tax credit scheme. Buhari inaugurate Ogun State landmark projects. This was revealed by the President during his visit to

On Thursday, President Muhammadu Buhari revealed that the Federal Government is taking into consideration giving the go-ahead for the reconstruction of some federal roads in Ogun State by the Nigeria Petroleum Company and other companies under tax credit scheme.

This was revealed by the President during his visit to Ogun State for the inauguration of five landmark projects undertaken by the Ogun State Governor, Dapo Abiodun. According to the governor, the roads being taken to consideration for reconstructions includes the Lagos-Ota-Abeokuta Expressway, Sango Otta-Idi-Iroko Expressway, and the Sagamu-Ogijo road.

The projects inaugurated included the 42km Sagamu Interchange-Abeokuta dual carriageway, renamed ‘President Muhammadu Buhari Expressway; the 14km Ijebu-Ode-Epe Expressway. In regards to the request of Ogun State governor, Dapo Abiodun, for Federal Infrastructural Funding, particularly on roads, the President said, “Ogun State has more federal roads than any other state in the country. Federal Government will consider giving approval to the NNPC for the reconstruction of the Sagamu-Ogijo road under the tax credit scheme.

All federal roads in the state would begin to receive Federal Government’s attention, adding that two major federal roads under construction, the Sagamu-Benin Expressway and the Lagos-Ibadan Expressway, would be inaugurated before the end of 2022.” He said.

President Muhammadu Buhari further stressed, “I have also listened to your requests to give priority attention to the Lagos-Ota-Abeokuta and the Sango Otta-Idi Iroko roads respectively. Let me assure the people of Ogun State that these roads will receive Federal Government’s attention.

President Muhammadu Buhari also complemented the Governor for being efficient and capable, and also described him as a worthy example of ‘‘promises made, promises kept.”

“When state governors deliver impactful projects in consultation with stakeholders like we are witnessing in Ogun State, the trajectory of our national development will be enhanced,” he said.

Governor Dapo Abiodun in his speech, said, “The choice of the five projects that we are commissioning today from our many landmark projects was a daunting task. These are just a few of our achievements. We have so much more to showcase. These selected few that Your Excellency will commission are however symbolic of the various types of projects across all sectors of our dear state’s economy. And they are spread all through the three senatorial districts.

Mr. President, I have the honor to report that our Administration in Ogun State has continued to fulfil all its promises to the people within the available means. It is noteworthy that all our projects have the inputs and are informed by the needs of the people as expressed by them at different engagement fora that we provide. This is because we anchor our ‘Building our Future Together’ agenda on inclusiveness, equity, fairness, transparency, accountability, justice, and obedience to the rule of law.”

It must be noted with this gesture that President Muhammadu Buhari has so much love for the country’s growth and development.

Dapo Abiodun was born on 29 May 1960 in Iperu Remo, Ogun State, to the royal family of Iperu. He was born into the family of Dr. Emmanuel Abiodun and Mrs. Victoria Abiodun from Iperu Remo, in Ogun East senatorial district. Dapo Abiodun (born 29 May 1960) is a Nigerian businessman and politician, who has been the Governor of Ogun State since winning the 2019 general elections under the platform of the All-Progressive Congress.

Dapo Abiodun was the board Chairman of the Corporate Affairs Commission. Prior to his assumption of office, he was the managing director of Heyden Petroleum and the founder of First Power Limited. On 10 March 2019, he was declared Governor-Elect of Ogun State by the Independent National Electoral Commission.

“Ogun State is a state in southwestern Nigeria. Created in February 3rd 1976 from the former Western State. Ogun State borders Lagos State to the south, Oyo State and Osun State to the north, Ondo State, and the Republic of Benin to the west. Abeokuta is both Ogun State’s capital and most populous city; other important cities in the state include Ijebu Ode, the former royal capital of the Ijebu Kingdom, and Sagamu, Nigeria’s leading kola nut grower.

Ogun state is covered predominantly by rain forest and has wooden savanna in the northwest. Ogun State had a total population of 3,751,140 residents as of 2006, making Ogun State the 16th most populated state in Nigeria in terms of landmass, Ogun State is the 24th largest State in Nigeria with land area of 16,762-kilometer square. Nicknamed the “Gateway to Nigeria”, the state is notable for having a high concentration of industrial estates and being a major manufacturing hub in Nigeria.

Major factories in Ogun include the Dangote Cement factory in Ibese, Nestle, Lafarge Cement factory in Ewekoro, Memmcol in Orimerunmu, Coleman Cables in Sagamu and Arepo, Procter & Gamble in Agbara, amongst others. Ogun State is predominantly Yoruba, with the Yoruba language serving as the lingua franca of the state.

The dominant religions in Ogun State are Islam and Christianity although a certain amount of traditional religion is still practiced. Ogun State is noted for being the almost exclusive site of Ofada rice production. Ogun is also home to many icons in Nigeria in particular and Africa in general”. This section is culled from WIKIPEDIA.