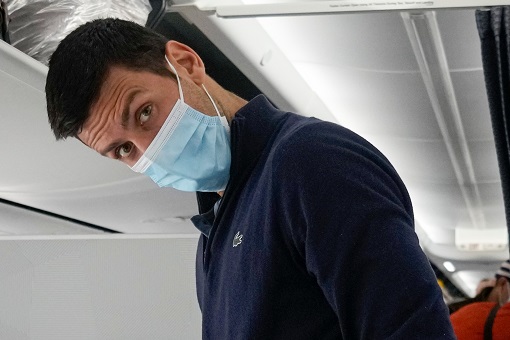 Tennis star Novak Djokovic is planning on suing the Australian government on grounds of “ill-treatment” following his recent deportation. This comes after a highly dramatic week of controversial vaccine exemptions, court hearing, and time spent in a detention center. Novak Djokovic plans to sue Australian Government. The case is said to be worth upwards of

Tennis star Novak Djokovic is planning on suing the Australian government on grounds of “ill-treatment” following his recent deportation. This comes after a highly dramatic week of controversial vaccine exemptions, court hearing, and time spent in a detention center.

The case is said to be worth upwards of $6million. The tennis star made headlines across the world after his visa was cancelled at the border.  Despite the drama, Novak Djokovic was still sent packing and he couldn’t defend his Australian Open and fulfill his hopes of clinching a record-breaking 21st Grand Slam title.

A close source said, “It’s well known that Novak and his family feel he was poorly treated in the quarantine hotel in Melbourne. His mother revealed how it was full of fleas and maggots. He was kept a virtual prisoner.”

Lawyer Toma Fila added: “He was subjected to humiliating treatment. He should sue.”  Novak Djokovic in a statement stated that he was extremely disappointed with the court’s decision to dismiss his application but he respected its ruling.

It seems the tennis star has shifted his attention to the French Open.  With the Australian Open now behind him, the France Open also now seems unlikely too with France’s parliament recently approving the introduction of vaccine certificates to enter public venues.

The chances of Djokovic equally defending his Wimbledon title appear to be diminishing. Wimbledon officials are yet to offer the 34-year-old any assurance on whether he can compete as an unvaccinated player.

Novak Djokovic would have avoided the entire drama if he had just gotten vaccinated other than putting his career at stake.

“The racket sport traditionally named lawn tennis, now commonly known simply as tennis, is the direct descendant of what is now denoted real tennis or royal tennis, which continues to be played today as a separate sport with more complex rules. Most rules of (lawn) tennis derive from this precursor and it is reasonable to see both sports as variations of the same game.

Most historians believe that tennis was originated in the monastic cloisters in northern France in the 12th century, but the ball was then struck with the palm of the hand; hence, the name jeu de paume (“game of the palm”). It was not until the 16th century that rackets came into use, and the game began to be called “tennis.” It was popular in England and France, and Henry VIII of England was a big fan of the game, now referred to as real tennis.

Many original tennis courts remain, including courts at Oxford, Cambridge, Falkland Palace in Fife where Mary Queen of Scots regularly played, and Hampton Court Palace. Many of the French courts were decommissioned with the terror that accompanied the French Revolution.

The Tennis Court Oath (Serment du Jeu de Paume) was a pivotal event during the first days of the French Revolution. The Oath was a pledge signed by 576 of the 577 members from the Third Estate who were locked out of a meeting of the Estates-General on 20 June 1789″. This section is culled WIKIPEDIA. https://en.wikipedia.org/wiki/History_of_tennis