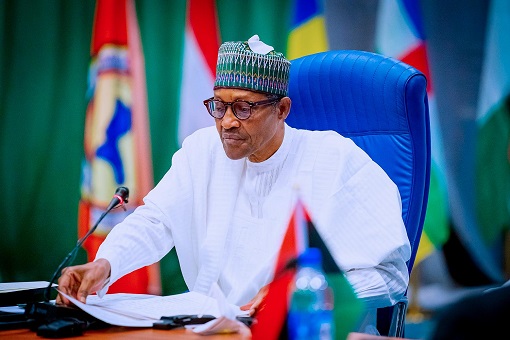 The President incidentally, is yet to communicate his position on the Electoral Act Amendment Bill to the National Assembly. According to section 58 (4) of the 1999 constitution as amended,  “Where a bill is presented to the President for assent, he shall within thirty days thereof signify that he assents or that he withholds assent.”

Section 58 (5) provides: “Where the President withholds his assent and the bill is again passed by each House by two-thirds majority, the bill shall become law and the assent of the President shall not be required.”

Section 58 (1) of the 1999 Constitution provides that “the power of the National Assembly to make laws shall be exercised by bills passed by both the Senate and the House of Representatives and, except as otherwise provided by subsection (5) of this section, assented to by the President”.

The Civil Society Organization (CSOs) accused Buhari of trying to destroy the country’s democracy. Delineate his actions as the biggest threat to Nigeria’s democracy.

The CSOs called on the National Assembly to override the president’s veto. According to him, “It has come to the point where we must tell President Buhari in unmistaken terms that his failure to sign the bill within the 30 days window has exposed him as the biggest threat to the Fourth democratic republic, having failed to perform a similar responsibility four times in his first term.

“President Buhari benefitted significantly from some of the electoral reforms initiated by Yar’Adua and signed by Jonathan; if he fails to sign the amended electoral act, history will record him as a major impediment to electoral credibility and governance. This is a low hanging lifetime opportunity for the president to salvage his terrible electoral credential”

The civil society groups pledge to storm the National Assembly today in protest, to press for the overriding of the president in the interest of Nigerians.

“Consequently, the next step is for us as CSOs to take our advocacy to the National Assembly to step in, exhibit courage, recall the bill, and ensure they override the president with an accelerated passage before Christmas.

“The Ninth National Assembly has deferred too much to President Buhari almost to the point of ridicule, so, if the president does not respect and reciprocate this gesture, history will be kind to them if they override the president and salvage their own political future.

“This will not be the first time in the last 20 years that the National Assembly will override the president; the Fourth legislative session did so and got the NDDC Act passed and operational. The Ninth National Assembly has the opportunity of not sharing with the executive, the glory that will accompany the new act.”